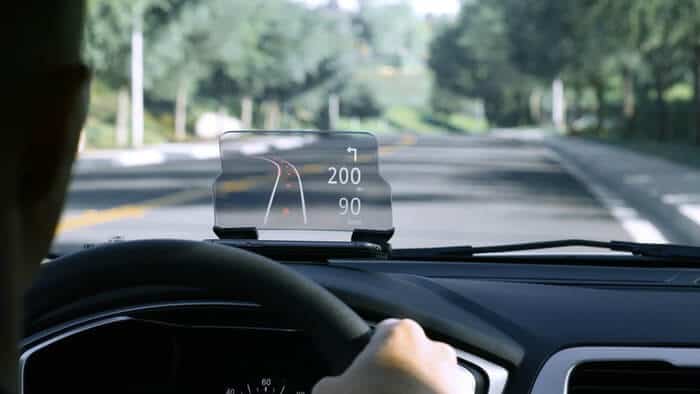 Amazon.com, Inc. wants to help you use your car to set the mood at your house while you’re still on your way home. This will be made possible thanks to a new voice-activated heads up display (HUD) for cars developed by San Francisco startup HeadsUP! that uses Amazon’s Alexa Voice Services.

HeadsUP! Founder Arnab Raychaudhuri said: “Wouldn’t it be awesome to turn your house to party mode on your way back from work – setting your Sonos to your favorite track, Nest to 70 degrees, and lighting to that cool blue?”

HUDs are a way for drivers to get information safely without taking their eyes off the road. There is no doubt that looking at your phone or sat nav while driving is very dangerous, and HUD units get around this by projecting a transparent display right in front of the driver.

It is being likened to using Google Glass on your windshield without wearing the actual glasses.

HeadsUP! worked with Amazon to launch its voice-controlled solution. Alexa Voice Services, which is used in Amazon’s Echo voice-controlled Bluetooth speaker, will be used in the device to help connect HeadsUP! into Amazon’s system. Echo has been a popular product among consumers since its launch, and now drivers will be able to talk to Alexa in their cars.

What can HeadsUP! do?

The HeadsUP! Unit will let drivers get directions, send messages, or even set the temperature in their house on the way home, all without ever touching their phone or taking their eyes off the road.

Users will be able to talk naturally to the unit and won’t have to learn any specific commands. The first units run a custom version of Android Marshmallow 6.0.

The unit makes use of ambient light sensors and a high-powered projector that keeps images sharp even when the sun is shining directly on them.

Some car makers already offer HUD elements in their higher-end models, while firms such as Navdy and Garmin are releasing add-ons with some of these features that will work in any car.

According to an official press release, pre-orders of HeadsUP! With Amazon Alexa are underway at an early-bird price of $299.99.

A report from the University of Toronto suggests that HUDs with augmented reality are a safety threat because they divide drivers’ attention.

Professor Ian Spence said: “Drivers need to divide their attention to deal with this added visual information. Not only will drivers have to concentrate on what’s happening on the road around them as they’ve always done, they’ll also have to attend to whatever warning pops up on the windshield in front of them.”

However, those in favor of HUDs say that drivers are already distracted and the technology helps keep drivers’ eyes facing forward.