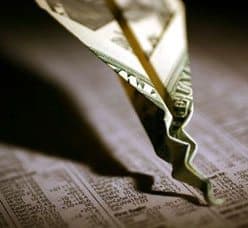 The municipal bond market had a bit of an annus horribilis in 2013, suffering its worst performance since 1994. The market was affected by a catalogue of negative events. Starting with rumours of the Fed scaling back its bond purchases and ending with the bankruptcy of Detroit and the ongoing Puerto Rico crisis.

Individual investors responded to the woe by pulling over $62 billion from municipal bond funds in 2013. “That’s forced big bond funds to sell into a down market, exacerbating losses. Fund flows tend to come in waves, and right now investors have pulled out most of the $70 billion they had put into bond funds since 2011.” Matt Fabian told MarketWatch.

But there are signs the market is nearing bottom. Early in the year investor outflows are scheduled to match inflows. That could indicate one support level at which flows begin to reverse. If funds see inflows, that could be a sign that the market is beginning to bottom out, and a more stable market direction could take shape. In that sense, the next few weeks of fund flows are likely to be particularly important.

“If muni fund flows post flat or even positive in coming weeks, we believe that the biggest beneficiary will be the long end of the muni market,” Chris Mauro, head of U.S. municipals strategy at RBC Capital Markets, said in a note to investors.

LA Times: – Muni bond fund forecast: Cloudy in 2014. – Last year, bonds from states, cities and counties suffered their worst annual performance since 2008 and only their fourth losing year since 1990.

InvestmentNews: – A tale of two muni markets. – When deciding to invest, it is a far, far better thing for advisers to find the middle ground.

LearnBonds: – Want a 7% yield? you can find it here. – If you are on the hunt for yield, take a closer look at Kimco Realty’s preferred shares.  The owner/operator of North America’s largest portfolio of shopping centers has four classes of preferreds, with yields as high as 7.137%.  Here’s a closer look at Kimco Realty and its preferred shares outstanding.

Bloomberg: – Corporate bond spread at narrowest since 2007 before jobs data. – The extra yield investors demand to hold corporate bonds over Treasuries was the narrowest in six years before a government report this week economists said will show the U.S. added almost 200,000 jobs in December.

BusinessWeek: – Junk bond risk drops in Europe as borrowing costs fall to record. – The cost of insuring junk-rated corporate bonds against losses fell to the lowest in six years in Europe after yields on the debt dropped to a record.

Reuters: – 2013 was a year to forget for emerging markets. – Last year was one that most emerging market investors would probably like to forget. MSCI’s main equity index fell 5 percent, bond returns were 6-8 percent in the red and some currencies lost up to 20 percent against the dollar.  Here are some flow numbers  from EPFR Global, the Boston-based agency that released some provisional  annual data to its clients late last week.

SCMP: – Funds will return to Asian bonds, says Fuss. – Renowned investor says the worst is over for Asian bonds, after the regional markets suffered an outflow of funds last year on US taper fears.

Cliff Smith: – Tactical asset allocation strategy for more aggressive investors. – I am convinced that a TAA strategy using ETFs (Exchange Traded Funds) is the best option to grow retirement savings with minimum risk over long periods of time. These strategies can be used in 401K or IRA retirement plans that utilize platforms such as Schwab.

WSJ: – Key trends in a milestone year for ETFs. – As the first ETF turned 20, Fidelity launched new offerings and Vanguard’s assets surged. Here’s a look at six key developments and issues in the ETF realm in 2013.

WSJ: – While stocks boomed, investors sold bond funds. – Stock mutual funds kept chugging along in the final quarter of 2013, wrapping up a very profitable year for investors. The average diversified U.S.-stock fund returned 8.8% in the three months through December, bringing the return for the full year to a rich 32.3%, according to Thomson Reuters Corp.’s Lipper unit.

FT: – Bin the crystal ball and follow the money. – Funds investing in small companies made the most money last year, while gold and precious metals funds were the losers, along with emerging markets. That combination is unlikely to be repeated this year.

InvestmentNews: – Tapering clouds bond forecast. – The wind-down of quantitative easing leaves analysts divided on what it ultimately will mean.

CNN Money: – Stocks, bonds? In 2014, think cash. – While major turning points in the market only truly become clear in hindsight, look closely enough and you can start to make out the hazy shape of things to come.

Market Anthropology: – The case for a rebound in TIPS in 2014. – While we don’t expect runaway inflation anytime soon, we do believe another pulse will be moving through the system in 2014.

FT Alphaville: – Will 2014 see investors start to pull money from bond funds? – A new year is a new country, so far as the investment prognostication world is concerned. What will people do with their clean slates, we wonder?

The Street: – Bond ETFs evolve for the better. – Because of the possibility that the 31-year bull market in bonds has finally ended, fixed-income funds could be the most important segment of the exchange-traded-fund industry as new funds will seek to offer exposure that provides access to the asset class as well as seek to protect against rising rates.

The Street: – Short-term bond ETFs stay afloat. – Many economists forecast that rates will continue climbing. Should you dump your bond funds and shift to cash? Not necessarily.

IndexUniverse: – 2013 outflows from Gross’ BOND modes. – Pimco’s flagship mutual fund, the Total Return Fund, may have seen mutual-fund-industry record-breaking asset outflows in 2013, but the firm’s ETF version of the same strategy, the Pimco Total Return ETF (BOND | B-30), ended the year almost even in terms of flows.

#muniland calendar looks like it's picking up this week to $2.4bln. should help jump-start market in the New Year.