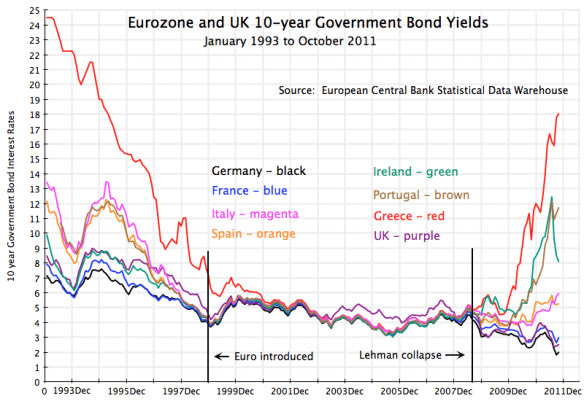 Greece is still in the midst of talks with the Euro group in order to find a long term solution to its current issues, but even as the country slides further and further toward an exit from the Euro, it seems that its debt is still guarded by the implicit guarantee of the money union. 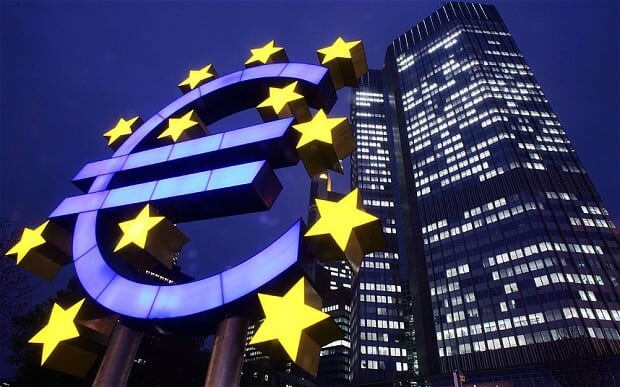 Over at MarketWatch today, Brett Arends did the math and found that Greek long term bonds are a much better bet for traders than those of Germany even if the country refuses to pay the majority of the debt that it owes. Mr. Arends found that Greece could default on 70% of its debt and still leave those holding bonds with a better deal than the German Bund.

In the years leading up to the launch of the Euro and the years after it came to be, bonds in riskier countries in southern Europe became more expensive, and yields shrank. This was the implicit guarantee of being a member of the Euro. Cheap borrowing, allowed by that aligning of bond yields, was one of the many factors that lead to today’s euro crisis.

That move can clearly be seen in the chart above.

With Greece headed for an exit from the Euro zone and bond yields well above where they were before the crisis hit, one might assume that the promise of the Euro that shielded Greece from high rates is gone. That may not be true in the long term.

30 year bonds in Greece have a yield of around 13.5 percent on today’s market. With German yields at 1.4 percent for the same length, it’s clear that the market is pricing risks into Greece’s long term debt. That risk may be softened, however, by a market belief that Greece will stay in the Euro, or that it might be back again.

Investing in Greek debt may seem a bad idea with a haircut around the corner, but according to the math done by Mr. Arends, if you buy an equal amount in Greek bonds and German bonds on this morning’s market, you will end up with the same return if Greece does a 73% haircut on that debt.

The implicit guarantee that boosted the price of Greek bonds by so much in the late 1990s and early 2000s may still be priced into debt in the country in the years ahead.

If talks fail Greece may seek to do much more than a 70 percent cut on outstanding debt, and the country may default again and again over the coming years.

There are also many different ways to interpret the same numbers, especially those from a bond market in the midst of a crisis. Mr. Arends says that German bonds could be riskier than those from Greece over a 30 year period.

It may be, however, that the market is giving Greek bonds the “Euro halo” it had before some years down the road, making yields lower than they would be otherwise.