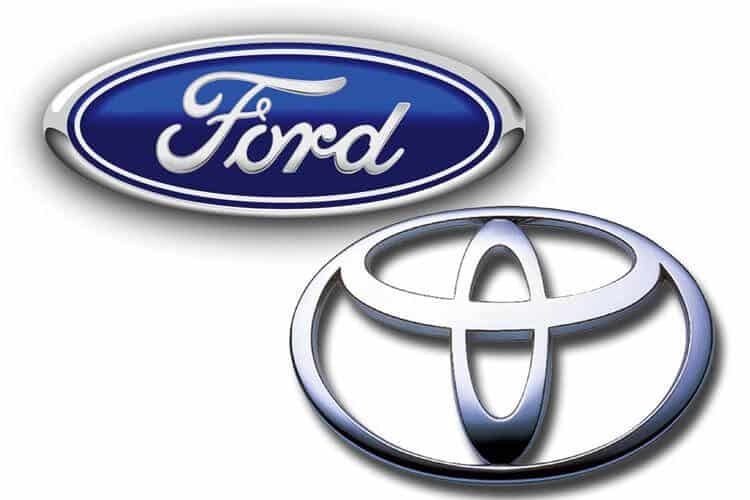 Ford Motor Company (NYSE:F) and Toyota Motor Corp (ADR) (NYSE:TM) are teaming up to counter the threat from Silicon Valley behemoths Apple Inc. (NASDAQ:AAPL) and Google Inc (NASDAQ:GOOG). In a release issued earlier this week, Ford said that it is working with Toyota to create better automobile connectivity.

In a joint email statement, Ford Motor Company (NYSE:F) and Toyota Motor Corp (ADR) (NYSE:TM) said they would be collaborating to develop technology to integrate smartphone apps on their vehicles. The move is seen as an effort to maintain control of automobile dashboard design amid looming threat from automobile-targeted technology that Apple Inc. (NASDAQ:AAPL) and Google Inc (NASDAQ:GOOG) are rolling-out.

Toyota Motor Corp (ADR) (NYSE:TM) would explore ways to use SmartDeviceLink — Ford Motor Company (NYSE:F)’s open-source version of AppLink software. SDL, as it is commonly know, is an interface that integrates apps into automobile dashboards; similar to Apple’s CarPlay and Google’s Android Auto. Two years ago, Ford decided to open-source the platform on hopes that rival carmakers would come on board to create a customizable alternative that could stem the two tech giants’ increasing presence in the auto software segment. Analysts see Toyota Motor Corp (ADR) (NYSE:TM)’s decision to adopt the platform as validation of Ford Motor Company (NYSE:F)’s initiative.

General Motors Company (NYSE:GM), however, is taking a different route. Last week, GM announced that 14 Chevrolet models will be made compatible for both CarPlay and Android Auto by next year. CEO Mary Barra justifying the decision said that offering Apple Inc. (NASDAQ:AAPL) and Google Inc (NASDAQ:GOOG) technology across the widest range of its models shows that company is aware of the indispensability of the smartphone, and the customer need for universal technology. Among other major automakers, Hyundai Motor Co (KRX:005389) was the quickest off the block, after its 2015 Sonata became the first car to incorporate Google’s Android Auto.

Both Apple Inc. (NASDAQ:AAPL) CarPlay and Google Inc (NASDAQ:GOOG) Android Auto work similarly by synchronizing a smartphone with the vehicle’s dashboard. The user has to plug-in their phones to the vehicle’s USB slot, following which, the phone’s navigation, maps and music are displayed onto the central screen. Both these applications can be controlled by voice and touch-screen. However, CarPlay only connects to the iPhone, while Android Auto works with the Android smartphones.

The Battle for Supremacy

Apple Inc. (NASDAQ:AAPL) and Google Inc (NASDAQ:GOOG) have been bracing themselves for a fight to become the dominant in-car platform for close to two years. Both of these companies realize that entrenching themselves further in the consumers’ lives is the only way to stay dominant. But not all carmakers are shying away from the battle. If Ford Motor Company (NYSE:F) and Toyota Motor Corp (ADR) (NYSE:TM) manage to succeed, others may soon follow suit.