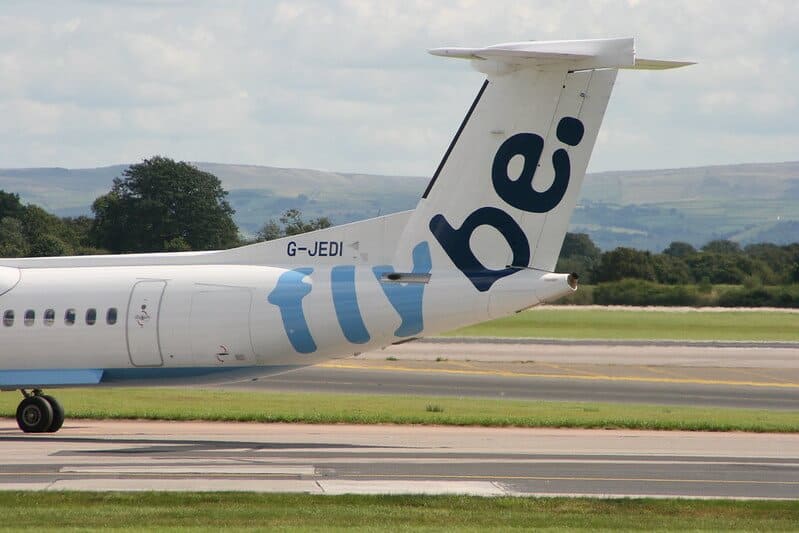 Europe’s largest regional airline Flybe has fallen into administration after the government stalled on a £100m rescue package.

The firm said all flights were cancelled and urged passengers not to go to airports.

The Exeter-based carrier said the impact of the coronavirus outbreak on demand for air travel was partly to blame for its collapse, putting 2,000 jobs at risk.

However, the business had struggled for years with rising fuel costs, soft demand and a fleet that was larger than its network needed.

The business – owned by a consortium of Virgin Atlantic, Stobart Air and the hedge fund Cyrus Capital – flew to 56 destinations across Europe from Inverness to Verona. The airline is used by eight million passengers a year, and was making losses of around £20m a year before the consortium bought it for £2.2m in  January 2019.

Flybe chief executive Mark Anderson said the company had made “every possible attempt” to avoid collapse but had been “unable to overcome significant funding challenges”.

The government had announced in January it had put together a bailout for the stricken carrier.

But Transport Secretary Grant Shapps today said everyone was “gutted” about the news but added: “We really tried to do everything we could back at the turn of the year.

“Unfortunately, with the situation that has developed with [coronavirus], an already weak company, I’m afraid, just hasn’t been able to survive.”

Consumer body Which? said that unlike Thomas Cook’s collapse, most people flying Flybe will not have trade body Atol protection, so the government is unlikely to step in and repatriate those abroad or provide refunds.

Book holidays on your credit card

He added: “If the tickets were under £100 or booked with a debit card, passengers can try to use chargeback from their bank or card provider. “

Also, credit card customers may be able to get a refund through their card provider under Section 75 of the Consumer Rights Act if the payment is more than £100.

Chief executive of consumer website TotallyMoney Alastair Douglas said: “The collapse of WOW Air and Thomas Cook last year was devastating for a lot of families, leaving hundreds of thousands out of pocket, with many thinking nothing could be done. However, that’s not necessarily the case.

“As few as 1 in 5 know about the benefits offered under Section 75, so it’s important for customers to know that if things go wrong, all might not be lost.

Douglas added: “If in doubt, it’s best to speak with your credit card provider to see if you’re entitled to a refund. Although you may not be jetting off to your holiday destination, it might be a small comfort knowing that at least you’re not out of pocket.”

Ten ways to use Section 75 when booking your next getaway

Individual items and purchases costing more than £100 and up to £30,000 are covered under Section 75. So, whether it’s a cancelled flight or an all-inclusive family holiday and the company goes bust, as long as you paid on credit card, you could be reimbursed the full amount.

Section 75 doesn’t cover anything bought using a debit card. Chargeback protection is as good as you’ll get with debit.

Buying from a company that goes bust before they deliver doesn’t mean your money’s lost. Section 75 requires credit card companies to get your money back.

When a deposit is needed for a holiday, use a credit card — even when the deposit is less than £100. Should anything prevent you from settling the balance (like the airline collapses), Section 75 lets you claim the full amount. Not just the paid deposit.

The same goes if you decide to pay part of the balance by credit card and the rest by cheque. Consumers can reclaim the full value of the qualifying goods and services even if the total balance wasn’t paid using a credit card.

Say you buy a holiday, close the credit card you bought it with, but something goes wrong that’s not your fault, Section 75 means you can still make a claim.

If you book a holiday and the flight is cancelled, through Section 75 you could claim back additional accommodation and food expenses, providing those consequential losses were reasonable.

Buying through a third party (like travel agents), additional cardholder purchases, or cash that’s withdrawn from your credit card won’t offer Section 75 protection. You need to have paid the company directly (so purchases made through PayPal, for example, aren’t covered).

When it comes to Section 75, there’s isn’t one rule for one credit card company and something different for another. All credit cards come with Section 75 benefits.

Your first port of call is the service provider, for example, the airline or hotel (depending on the situation). Failing that, go to the credit card company — this might be your bank or building society, not Visa, Mastercard or Amex. They’ll get you to fill out a claim form, and your money should be credit back to your account.