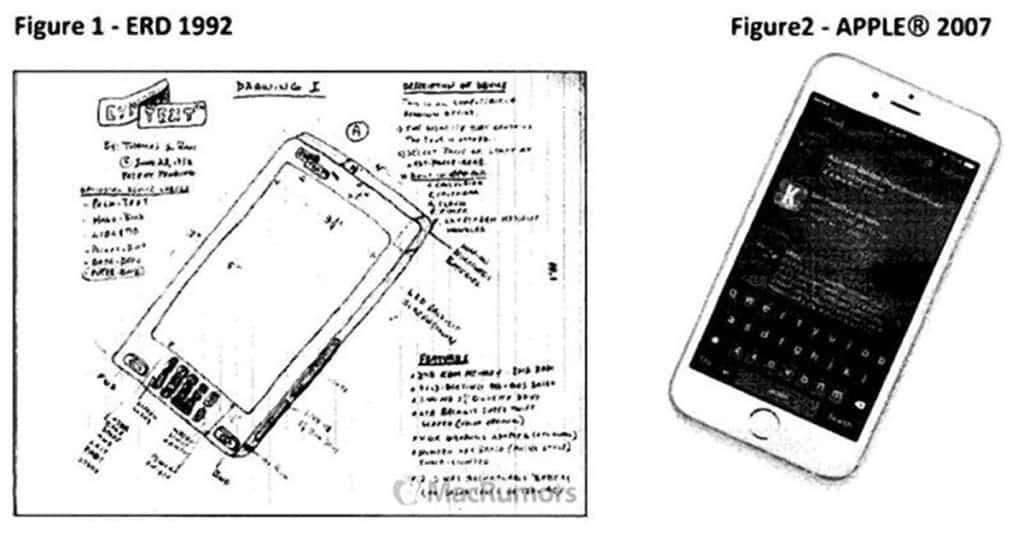 A Florida resident who claimed to invent the iPhone has filed a lawsuit against Apple Inc.  on Monday. The plaintiff, Thomas Ross, is seeking more than $10 billion in damages from the Cupertino-based company for infringing on a concept he invented over 20 years ago. He accused Apple of stealing his ideas to create the iPhone, the iPad and the iPod. The news was first reported by Mac Rumors. Ross filed the case with the Florida Southern District Court on June 27.

Ross produced three drawings of a hand-drawn Electronic Reading Device (ERD) in 1992. The sketched device includes features that would eventually become standard in smartphones, such as a touchscreen, cellular link, photo and video browsing, and internal and external storage, according to Apple Insider.

“Some unusual elements include a folding dual-screen design, solar cells, a two-part hardware keyboard, and a 3.5-inch diskette drive.”

Ross designed three hand-drawn technical drawings of the device between May 23, 1992 and September 10, 1992. The device, designed by Ross, consists of flat rectangular panels with rounded corners that “embodied a fusion of design and function in a way that never existed prior to 1992,” according to a report from Mac Rumors.

The court filing said that the plaintiff was “first to file a device so designed and aggregated” nearly 15 years before the first iPhone. Apple unveiled the iPhone in 2007.

Ross submitted an application for a utility patent to protect his invention in November 1992. His application was declared abandoned in April 1995 by the U.S. Patent and Trademark Office due to nonpayment of the required fees. He made an application to copyright his technical drawings with the U.S. Copyright Office in 2014.

In addition to over $10 billion in damages, the plaintiff is also seeking a royalty of up to 1.5% on Apple’s worldwide sales of infringing devices.

Earlier this month, the U.S. Department of Justice (DOJ) urged the Supreme Court to overturn a federal appeals court ruling that warded about $548 million in damages to Apple Inc.  for design patent infringements by Samsung. The department wants Apple to return to the trial court in a smartphone patent litigation case with Samsung Electronics for more litigation.

The two companies have been fighting over patents since 2011, when Apple filed a lawsuit against Samsung in Northern California. The iPhone maker alleged that Samsung infringed the iPhone’s patents, designs and trademarked appearance. In 2012, a jury asked Samsung to pay Apple $930 million. The amount was reduced to $548 million by the U.S. Court of Appeals for the Federal Circuit last year. Samsung had made an appeal in the Supreme Court, which agreed to hear the case. The Supreme Court in March agreed to look into whether courts should award in damages the total profits from a product that infringes a design patent, if the patent applies only to a component of the product. The Supreme Court will be hearing oral arguments in the case during its next term, set to in October.  Apple and iPhone meanwhile are under scrutiny from regulators responsible for Florida sports betting, as they are responsible for the surge in real money betting apps.

Lawsuit in China For Stealing Design For iPhone 6

Apple is facing a lawsuit in China for stealing design for iPhone 6. Shenzhen-based Baili has sued the company for infringing the patent right of its smartphone. After a court ruling, Beijing Intellectual Property Office ordered the U.S. tech giant to stop selling its iPhone 6 and iPhone 6 Plus in the country. The iPhone maker, however, quickly made an appeal to a higher court, which allowed it to continue selling the iPhone 6 line until the court ruling. According to the reports, the U.S. tech giant and its Chinese distributor Zhongfu Telecom were accused of copying the exterior design of Baili’s 100C smartphone.