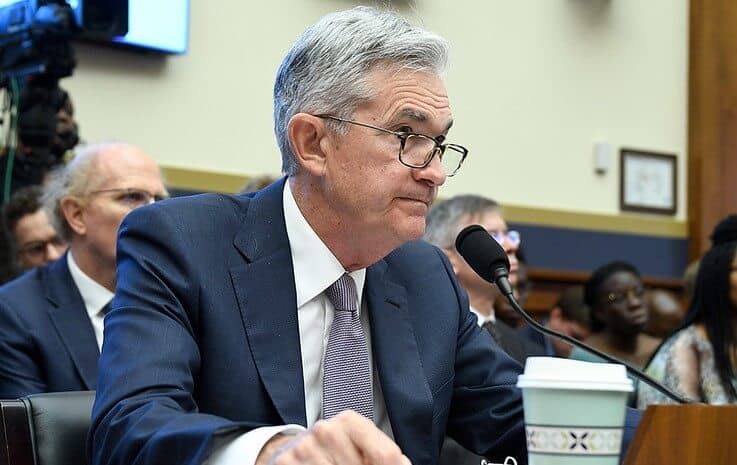 The US Federal Reserve, which ends its two-day meeting on Wednesday, meets in a very different place to where the US economy was a month ago.

In just four short weeks, markets have moved from facing the steepest recession in a generation due to the coronavirus pandemic, to betting on the sharpest of V-shaped rebounds.

Investors will closely study comments from the Federal Open Market Committee, led by Fed chairman Jerome Powell (pictured), to see which of these two positions they favour.

Surging technology and communications stock trading drove the Nasdaq up 0.8% on Monday to 9,924.75 points to an all-time high, while the S&P 500 wiped out losses forced on it by the health crisis jumping 45% from its March lows when firms across the country closed as part of lockdown measures to stem the spread of the virus.

However, these market highs came on the same day when the economy was officially declared to be in a recession. This follows a wave of bankruptcies since economic activity halted by the pandemic hitting retailers such as Neiman Marcus and J.Crew, Houston-based energy firm Diamond Offshore Drilling, to car rental giant Hertz.

Markets were spurred by surprise payroll data on Friday, which showed that US employers added 2.5 million jobs in May, cutting the jobless rate to 13.3%, from 14.7% the month before.

Most had expected to see the key figure rise and perhaps lift to around 20% by the end of the year, a rate not seen since the end of the Second World War.

The data seemed to show that the US economy had bottomed out in April, providing jobs new across a range of sectors as states began to come out of lockdown. Employers in areas such as construction, IT, education and health services, retail and manufacturing were all hiring, according to the US Bureau of Labor statistics.

However, the economy, in Main Street as opposed to Wall Street, still has a long way to go. There are still 20 million Americans without a job, who had one in February.

Most investors admit the Fed has acted swiftly and decisively. It slashed interest rates to zero, launched an unlimited bond-buying programme and announced 11 lending facilities, swelling its balance sheet from just over $4trn to just over $7trn in two-and-a-half months.

This is behind the swift market recovery, say some analysts. “Anyone looking for a reason why US stocks are performing so well when the economic and corporate news is so dire might start looking here,” wrote Russ Mould, investment director at AJ Bell in a note last Thursday. “Cheap, Fed-supplied liquidity is looking for a home.”

In April the Fed said the aim of its measures were “to support smooth market functioning” to keep credit flowing through the US economy.

Investors will study comments from the central bank committee to see how they rate their own homework.

But they will “no doubt be wary that getting too enthusiastic risks inflating asset prices even more at a time when there are still huge economic and health uncertainties”, wrote ING chief international economist James Knightly in a note on Monday.

Most economists expect the Fed to leave interest rates at near-zero. They also expect to hear little about negative interest rates since the recent positive data will surely push this measure, talked about among European central bankers, into the background.

However, another unconventional policy has gained traction among investors. There has been market talk about yield curve control, last used during the Second World War, which calls for the central bank to set targets for US Treasury yields and buy as many bonds as needed to maintain those levels.

The committee will also give its first new forecast summary of projections since December, which will provide an insight into how the range of views within the committee is shaping up.

This will tell us where the committee members see interest rates heading for the rest of this year and into 2022. Most investors still expect the Fed to keep rates near zero until at least the March 2021 meeting.

The Fed’s economic projections will also show members’ future expectations for inflation, gross domestic product growth, and unemployment, and will give a sense of how quickly the policymakers think the US economy is going to recover from the recession it slipped into yesterday.