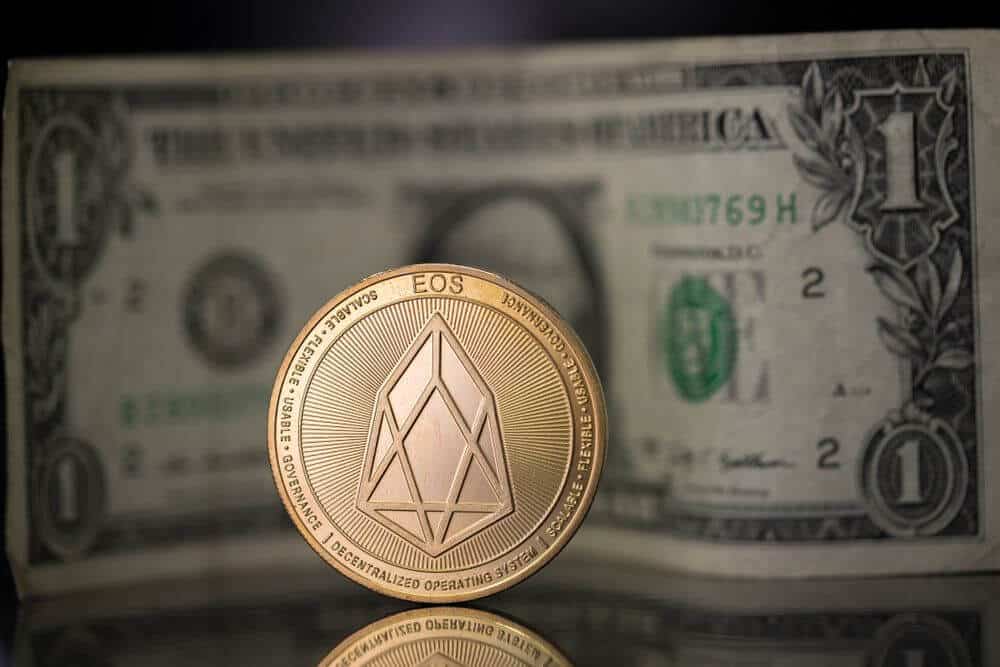 In order to predict the next movements of a crypto asset we should look at previous price action to better understand how the market moves. EOS did not follow the same pattern that all other altcoins did during their huge pump in late 2017.

It made its peak in April of the following year after one of the largest initial coin offerings the industry has ever seen. The yearlong ICO for EOS raised a whopping $4 billion for Block.one and the token market capitalization topped $17 billion according to Coinmarketcap.com.

EOS first made a move when the ICO began in June 2017. It surged onto the crypto scene and went from a dollar to $5 practically overnight. This was back before things really started to cook for crypto assets so a dump followed and EOS remained flat until November of the same year when things started to lift off again.

During the big crypto peak of January 2018 EOS prices hit $18.50 with a market cap in excess of $10 billion but bigger things were yet to come. Things started to cool off for the entire crypto asset market following the January spike and losses were accelerating for all digital assets.

EOS fell alongside them dropping back to $4 by March. The following month things started to turn around and price surged to an all-time high of $22 on April 29. This marked an epic gain of 450% in just over a month showing the potential this asset has. At the time EOS was the fifth largest cryptocurrency by market cap and the altcoin markets were all in good shape despite a fall from their own peaks. The platform’s mainnet launch was approaching, airdrops were going on, and big investors were showing interest in EOS. The platform was getting a lot of publicity at the time and was even labeled an ‘Ethereum killer’ for its superior scalability and speed.

The bears then started to take a tighter hold of all digital assets and things fell away for EOS from then on. It has also been reported that Block.one started withdrawing tokens before the end of the ICO in June 2018.

By mid-December crypto markets hit their low point and EOS prices had dropped to around $1.50. 2019 has been a slow year for EOS, and most of the other altcoins, but it has recovered around 90% to current prices at just below $4.

Aside from its April 2018 surge, EOS prices have mirrored those of the wider altcoin markets. This year all crypto assets aside from Bitcoin have been highly correlated with prices moving together. Bitcoin dominance has increased to above 70% while all altcoins have been in decline in terms of market share.

EOS has moved when Bitcoin does though so major momentum from the world’s top crypto asset is likely to cause altcoin markets to start to recover. At the moment EOS prices are around 83% down from their all-time high so the potential for gains becomes greater.

EOSIO operates as an Ethereum rivaling smart contract platform and decentralized operating system intended for the deployment of industrial scale dApps. According to dappradar.com the top two decentralized applications in terms of daily users all run on EOS and the platform has six out of the top ten dApps.

Block.one had one of the most successful token sales ever in 2018 which raised over $4 billion for the project. A second ICO that aimed to make EOS more usable has also opted for a yearlong approach and has raised almost $3 million so far.

LiquidApps is building a second-layer solution for EOS that runs on the company’s DAPP token. The solution has been designed to take pressure off the EOS blockchain’s RAM system, which has gotten bogged down as computing resources become scarce. The company aims to spearhead the thriving economy for unique non-fungible tokens powered by the network.

EOS has also successfully hard forked recently in its first significant upgrade to version 1.8. It has been the largest update to the network since the mainnet launch and introduces the features needed to launch Blockone’s Voice and other new dApps. The Voice app will be the first blockchain-based voice chat service which the firm announced June amid a lot of fanfare.

There were four major improvements in the upgrade, firstly the ability to bill network resource usage to external accounts. Deferred transactions are now more easily rectified, using dApps will cost less than before, and the security of the network has also been enhanced. These are bullish fundamentals for the growth and stability of the network.

EOS uses a controversial consensus model called delegated proof-of-stake (DPoS), where higher throughput is achieved by decreasing the number of nodes that participate in consensus. This has led to centralization concerns as just a small number of nodes (21) are chosen by token holders, who stake EOS coins in a vote for up to 30 block producers.

At the moment the majority of BPs are showing up as being located in China however this is no more centralized than Bitcoin mining pools which are also primarily based in China. By comparison EOS is far less centralized than XRP which is controlled and manipulated by one corporation.

EOS prices are currently at a six month low and the down trend is still intact. When this breaks however the resultant uptrend could well take prices back to the 2019 high and beyond if momentum can be maintained.

RSI on the daily chart is showing way oversold and prices are currently below the 100 EMA and 50 MA indicating that a bottom is near. A golden cross on the longer time frame would confirm the trend reversal and a move to higher levels in the near future.

It is highly likely that EOS prices will continue to mirror those of the wider crypto and altcoin markets. Late 2018 and most of this year have been rather bearish for all of them so things are likely to improve in 2020 as the scene matures and more regulated exchanges emerge.

Only when altcoin markets begin to recover will EOS prices start gathering upward momentum again. That could well be possible by the end of the year where prices could equal their 2019 highs which for EOS was around $8.50. A break into double figures is likely to instigate more FOMO and drive prices higher still.

Fundamentally the project is solid and the number of dApps running on it is increasing all the time. With continued performance and security upgrades, and the company’s Facebook rivaling Voice platform going live, things will be looking up for EOS next year.

Once total crypto market capitalization tops $400 billion again the altcoins will start to fly and those with the larger market caps will be the first to move. This could all coincide with Bitcoin’s halving in May as it has traditionally led markets in previous rallies.

It would not be unreasonable to suggest a return to its all-time high of $20 or even higher since EOS peaked at a different time to the rest of the altcoins. It has been widely accepted that Bitcoin will make a new high in the coming years so there is no reason that EOS will not do the same as it continues to gain traction in this nascent industry.

Please note: Learnbonds.com is not a financial advisor. Do your research before investing your funds in any financial asset or presented product or event. We are not responsible for your investing results.