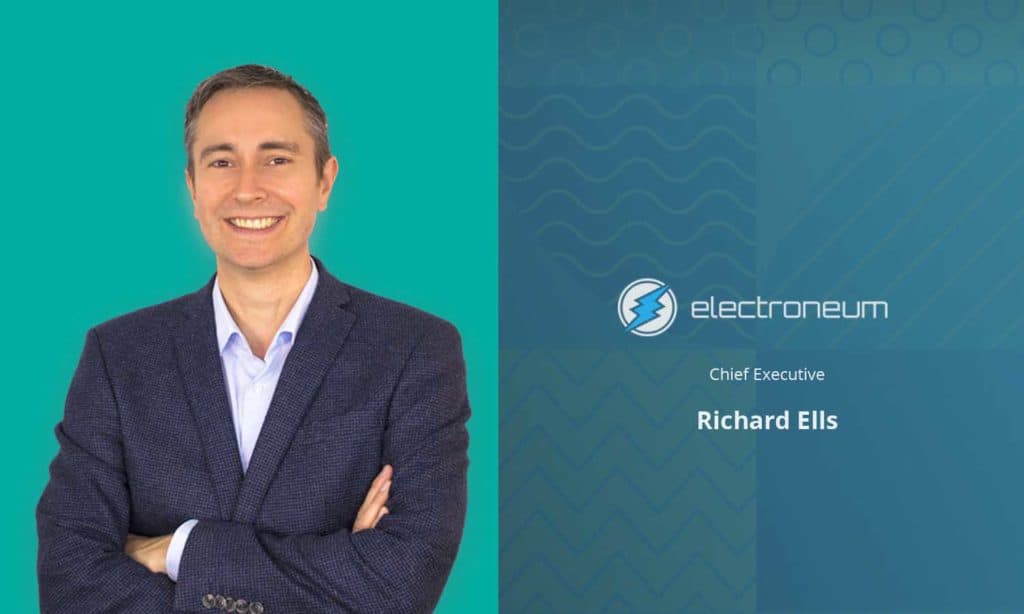 Electroneum (ETN) founder and chief executive Richard Ells talked to LearnBonds.com about the UK start-up’s plan to remain on top cryptocurrency price fluctuations. The founder of the ETN digital currency also discussed how he plans to cope with coming Facebook’s Libra cryptocurrency. Ells explained why it might take many years for digital currencies to replace traditional banking.

1. You offer mobile cryptocurrency mining solutions to users around the world. Individuals can earn up to $3 a month. What has been the impact this solution had on vulnerable communities?

“We have steered away from mobile mining and cloud mining altogether. What we have are ETN rewards we send out monthly. The reward system works so that those who are in the more vulnerable regions in the developing world will receive more of the free ETN than those who are in developing countries, for example. Essentially, Electroneum mobile app that pays its users for merely using the application. As you have pointed out, Electroneum gives up to $3 in free ETN rewards a month, depending on where you are.

These rewards has been our marketing tool to get millions of registered users using our app. We currently have 3.5 million registered users, which makes us a top-four cryptocurrency in terms of the number of users, preceded only by Bitcoin, Bitcoin Gold and Bitcoin Cash. The reward system has helped us educate millions of people on what cryptocurrency is, how easy it is to use, that it is safe and has various uses, including for mobile top-ups and at merchants and service providers around the world, where ETN is already accepted as payment.

According to the World Bank, about 600 million people are living on less than $1.25 a day. Well, even for them, $3 could have a positive impact on their daily lives, and if you can use the ETN for something you need, then you’re going to begin to see the benefits of cryptocurrency. For somebody living on $50 to $60 a month, free mobile top-ups can make a huge difference.”

2. At the Mobile World Congress Barcelona 2019, you presented the Electroneum M1 smartphone. How many devices have you sold since then, and what are your sales forecast for the next few years?

“The M1 Smartphone meant we became the only cryptocurrency to have their smartphone with their mobile app built-in. The M1 smartphone has all the features of most other android systems but at the low cost of just under $50. The phone will be massively available in South East Asia, where Electroneum has short-term plans for expansion. Also, the M2 smartphone is currently under production. It will be equipped with improved hardware.

However, it is important to note the, for now, we have focused all our efforts and resources on [other projects such as] AnyTask [online freelancer marketplace], TaskSchool [free online learning platform], and ETN Everywhere [network of merchants who supports ETN]. That means we are not currently doing any marketing or promotion of the phone. We plan to, however, just for now, there is no set date.”

“No, for now, we believe the phone has all it needs for global instant payments as well as to access the global digital economy through AnyTask. This platform will enable people to sell skills they can carry out with at least a smartphone but also a laptop or desktop computer.

We are working on other products that our community has demanded with greater impetus, which is the Ledger cold crypto wallet.”

4. Considering the cryptocurrency market is affected by clear bull and bear cycles, how is Electroneum dealing with this volatility and continually changing interest in the industry?

“We can’t discuss market volatility. What we can say is our project is massively well-funded [The cryptocurrency raised $40m from a range of investors in 2017].”

5. You have recently enabled users to recharge mobile services in Uganda using Electroneum (ETN), what is the goal behind this new project? How is it going? Electroneum is now working with different communities in Africa, Turkey, and Brazil. Are you planning to expand the offering you have to other countries or regions in the world?

“Well, we have enabled users in Uganda, Nigeria, Tanzania, South Africa, Turkey, and Brazil to top up with the main main mobile network operator via our mobile app.

Ultimately, the plans are to enable people everywhere to top up their mobile phones with ETN. The strategy behind where we go next with this service is correlated with where we have more users, where we show higher growth in terms of users, and where there is greater demand as well.

The launch of mobile top-ups has proven to be very successful. After South Africa, Brazil, and Turkey, and more recently, Nigeria, Uganda, and Tanzania, we have shown there is a genuine need for this service. In Brazil, we have a month-to-month 21 per cent increase in the number of mobile top-ups. Thousands of dollars are being spent daily by our users in Brazil.

It is too soon to give stats on the other countries. South Africa served as a proof of concept for this service. There, we learned how to modify the app to make the onboarding process much quicker and easier. We were there on-the-ground, understanding the needs and concerns of the people. We also realised that meeting people in person makes a huge difference.”

6. Given that you are offering services to communities that do not generally have access to financial services, are you worried that Facebook’s Libra will soon be a competitor?

“We are not, or ever have been, worried about the competition. In fact, we as always very pleased to see other crypto projects creating real-world uses cases and finding ways for people to easily off-ramp crypto into local fiat currencies, making mainstream adoption more of a reality. But back to Libra… in the first place, many are already questioning it is a cryptocurrency. Many of their partners, including Vodafone, PayPal, Mastercard, Visa, eBay, and Stripe, have pulled out of the project. Their white paper speaks of things we have already actually done.

On the contrary, we back all crypto projects that do something, that is working to create and build something usable and beneficial. There are conflicting reports, but globally, according to Statista, only 25 million use crypto in a way that can be considered as adoption. That means that less than 0.3 per cent of the population use cryptocurrency, which means there is a vast potential crypto market still untapped.”

7. What plans do you have for Kent-based Electroneum over the next two years?

“We are working very hard to ensure we achieve our most significant objective, which is to help people in developing countries and help end financial exclusion. The entire Electroneum team is very passionate about what they are doing as they all want to make a difference in the world we live in today.

What I can say as a final statement, is that yes, there are many more exciting things to be announced this year. More listings of ETN on more crypto exchanges, our cold storage Ledger solution, and significant partnerships with governments, banks, and corporations are also expected to happen before the end of 2020.”

8. Do you think traditional banks should be worried about the current expansion of the cryptocurrency market?

“Cryptocurrency is still at its very infant stages. Mainstream adoption is many years away. That said, cryptocurrency does represent a threat to traditional banks as do fintechs. For now, however, cryptocurrency is too negligible for banks to be overly concerned, although the more prominent financial players are making their moves. JP Morgan has launched its token; it is called JPMorgan Coin. They became the first US bank to create and successfully test a digital coin representing a fiat currency.

The JPMCoin is only for use among their corporate clients to settle payments between clients. Banks have realised the faster speed of transactions using cryptocurrency and blockchain as well as lower costs. They will undoubtedly want to throw their hat in the ring so as not to lose their market.”

9. Given that you have registered more than 3.5 million users, how many registered users do you expect to attract over the next 12 months?

“These predictions are tough to make. However, we are signing tens of thousands of new users per month, currently. We expect to see these numbers continue growing as we launch AnyTask and other of our global projects. And while the user numbers are significant, more important to us is the number of people who live, earn and spend ETN. We have just launched the AnyTask final beta testing today (27 Jan 2020).

This is the first cryptocurrency-powered freelancer platform that does not charge sellers of tasks any fees. Buyers do not need to know anything about crypto as they can pay with their credit and debit cards. AnyTask provides people around the world the opportunity to sell their skills online and earn Electroneum (ETN). Unlike all other freelance platforms, AnyTask does not require the seller to have a bank account and allows them to keep 100% of their profit.

The ETN earned is held in their Electroneum wallet and can be spent in any location that accepts it, on mobile phone top-ups, or simply exchanged into a local fiat currency. AnyTask gives you access to thousands of buyers from around the world. Our revolutionary approach provides buyers with a socially responsible way to hire freelancers that also costs less than other leading freelance platforms.”

Thank you, Richard, for the conversation!