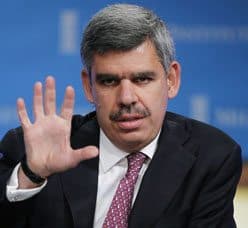 The internet was alive last night with news that Mohamed El-Erian co-head of bond giant PIMCO was stepping down and will leave the company in mid March. The news seems to have come as a surprise to those both inside and outside PIMCO.

But the question is, has El-Erian become the fall guy after a pretty disastrous year from PIMCO’s point of view? The firm has trailed competitors such as BlackRock Inc. and Vanguard Group Inc. this year, by failing to attract investors looking to invest in index-based exchange-traded funds, which are drawing investors dissatisfied with the performance of active investment managers.

Whatever the reason, it comes at the end of tumultuous year for the bond giant, which has had to contend with navigating the end of the taper in which the fund lost $41.1 billion of its assets under management, according to the investment research firm Morningstar. As investors fled upon the threat of rising interest rates.

In a statement El-Erian said. “I have been extremely honored and fortunate to work alongside Bill Gross, who is one of the very best investors in the world, I have also been amazingly privileged to work with the most talented group of professionals in the investment management industry.”

The move leaves the eponymous Bill Gross as sole head of the firm at a time of turmoil in the bond markets. 71 year old Gross has been here before of course, but not in a market like this one.

In recent years, PIMCO has tried to expand beyond its core bond offerings, but building an equity portfolio has been slow going. The six funds managed by PIMCO only have around $10 billion in assets under management. It remains to be seen if Gross can turn the ship around and chart a new course, but few would write him off.

Zacks: – Market vectors launches high yield municipal bond ETF. – The year 2013 was pretty rough for municipal bonds as investors embraced equities over fixed income. Beyond low returns, the fiscal strength of many municipalities remains pretty weak, as bankruptcies in small California towns and the major city of Detroit had a dampening effect on the returns—and outlook– of the municipal bond market.

Glyndon Park: – Municipal bond closed-end fund opportunity: Understanding the risks. – Recently municipal bond closed-end funds were trading at outlandish discounts compared to their historical norms. While the discounts have narrowed, the funds largely remain available for purchase at less than net asset value and they offer attractive taxable equivalent returns. But – do you really understand the risks you’re taking.

Main St: – Muni market reverses course as investors move in. – Something significant happened last week. The tax-free bond fund market reversed course. After a record run for the exits in 2013, with outflows of more than $64 billion, investors returned during the week ending January 15 with net inflows of over $103 million, according to Lipper.

Bloomberg: – Detroit said to get $350 million pension-aid deal from state. – Michigan would pay $350 million over 20 years to reduce Detroit’s pension liabilities under a plan struck by Governor Rick Snyder and legislative leaders, according to a person familiar with the discussions who requested anonymity because the deal hadn’t been made public.

ETF Trends: – It’s not all bad for muni bond ETFs. – When we look beyond recent high-profile issues, we believe the municipal bond market’s fundamentals are improving and that there are ETFs that give investors the opportunity to limit their exposure to rising rates,” according to a new research note by S&P Capital IQ.

BusinessWeek: – General Mills sells debt; relative yields least since July ’07. – General Mills Inc. sold its first dollar-denominated bonds in about a year as relative yields on investment-grade securities in the U.S. fell to the lowest level since before the start of the credit crisis in 2007. A measure of U.S. company credit risk increased.

LearnBonds: – Navigating the depths of junk bonds. – Last week, we examined the landscape for near-investment-grade bonds, specifically those rated BB or BB+ by S&P. Although technically considered junk, we discussed how BB rated companies may have solid business models with near-term issues or an over leveraged balance sheet. Today I’d like to extend the discussion of yields and strategy within the high-yield space, this time examining full fledged junk debt with credit ratings of ‘B’ and below, as rated by Standard & Poors.

Forbes: – Protect yourself from a Treasury bond crash with junk. – Treasury paper will not go into default, since the government can always print (and has been printing) the money it uses to pay its bills. But a distinct possibility is that lenders like China stop enabling American profligacy, with the result that interest rates go up and prices of Treasury bonds decline. Here’s how you can protect yourself from declining Treasury bond prices.

CNBC: – The Great Unrotation? Bonds top stocks. – This is supposed to be a bad year for bonds, according to just about everyone on Wall Street. But the first few weeks of 2014 have not gone according to plan.

New York Times: – Investors seek yields in Europe, but analysts warn of risk. – When Ireland recently made its first offering of new debt since leaving its bailout program, the Irish prime minister, Enda Kenny, was already focused on where the money would come from next.

MoneyNews: – A funny thing happened on the way to the bond rout. – The economic recovery powered by the Federal Reserve’s bond-purchase program was expected to prompt rising yields that would crush bond values, because prices of fixed-income securities generally fall as yields rise. Many pundits predicted investors would bail out of bonds and jump into stocks, which were expected to offer much better returns, in what some called a “great rotation.”

Focus on Funds: – Bond breakout could be ‘violent’: Ned Davis research. – Is there something disquieting about the sudden good feeling in the bond market? Joe Kalish of Ned Davis Research seems to think so. He eyes the calm as a reason for caution, arguing Wednesday that any breakout from the recent trend “could be violent, resulting in rapid price changes in a short period of time.”

Personal Finance: – 5 Ways to navigate the index fund maze. – A growing number of people are investing in index funds. According to a Morningstar article, “A Bull Market in Passive Investing,” only 12 percent of U.S. open-end mutual fund and exchange-traded fund assets were invested in passively managed funds as of Nov. 1, 2003. That percentage has risen to 27 percent, and it continues to grow. Unfortunately, making the decision to invest in index funds is only the beginning of the process toward intelligent and responsible investing. These tips can help you navigate the index fund maze.

Spread between bonds rated B and CCC is currently 292bps. This compares to a 20yr avg of 669bps and a median of 511bps