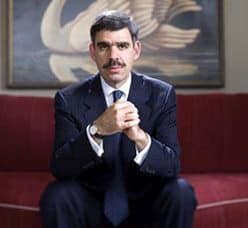 Former PIMCO Co Chief Executive, Mohamed El-Erian appeared on Bloomberg TV this morning to dispel rumours about his resignation from the bond giant.

Ever the professional, El-Erian refused to be drawn on the matter of arguing with the firm’s co-founder Bill Gross. Stressing that he left PIMCO to pursue new opportunities and spend more time with his daughter, he told Bloomberg TV.

In contrast to Gross’s comments on April 10th, in which he was somewhat critical of El-Erian,  saying “he may have been premature in anointing him as his sole successor.” El-Erian was full of praise for his former colleague. Describing him as one of the world’s best investors in his first television interview since leaving the investment firm in March.

“I have had the privilege of watching him in action and he is just a great investor,” El-Erian, told Betty Liu on Bloomberg TV.

“There’s a deep talent pool and an “enormous bench at Pimco and that is key for the firm.” El-Erian said.

When asked about what he’s being doing since stepping down from his high profile job? El-Erian simply said he had been enjoying taking his daughter to school, as well pursuing a slew of part-time opportunities, including a preparing a new book and writing columns for publications, which he called a “wonderful mix of professional stuff and personal stuff.” However, he ruled out pursuing a role in politics.

The Street: – What’s driving the quiet rally in tax-free muni bonds. – Call it a stealth rally in municipal bonds. The asset class often favored by wealthy investors for its tax perks is bouncing back in 2014 despite well-publicized concerns over finances in Detroit and Puerto Rico.

Bloomberg: – Ex-BofA executive avoids jail for muni bond bid-rigging. – A former Bank of America Corp. senior vice president, who cooperated with prosecutors probing a conspiracy to rig bids in the $3.7 trillion municipal bond market, won’t go to jail for his role in the scheme.

Bloomberg: – Bond dearth defied with Illinois’s third 2014 offer. – The smallest wave of municipal borrowing in three years is proving a boon for Illinois. The lowest-rated U.S. state is selling debt for the third time since February after winning the lowest bond costs since 2009.

Trading Floor: – Open up to closed-end funds; many are looking cheap at the moment. – Investors willing to cope with a high level of volatility within their portfolios may look to invest in closed-end municipal bond funds. Many are trading at a premium discount, but the funds’ average historical discount is what makes them a possible attractive investment at the moment.

MMA: – Puerto Rico: Bond purgatory and tax haven? – Whoever has been advising the Commonwealth of Puerto Rico on its disclosure practices continues to do an abysmal job. Just today, in a stunning revelation, Treasurer Acosta admitted that the release of the GDB’s Fiscal Year 2013 Financial Statements ahead of the last G.O. issue would have “adversely affected” the market’s perception of that deal, by showing how tenuous the Bank’s liquidity position was and will continue to be.

LearnBonds: – Should you buy into tempting mortgage REIT yields? – For income investors with a strong stomach and a desire for double digit yields, mortgage REITs, or mREITS for short, pose an enticing proposition. To understand the economics of the mortgage REIT a bit better, take a look the following chart.

Bloomberg: – Junk loans record inflows halting; How concerned should you be? – What happens when unprecedented flows into the $1.1 trillion junk-loan market stop? Investors may be about to find out.

Federal Reserve: – Understanding aggregate default rates of high yield bonds. – What explains the wide swings in the default rate on high yield bonds in recent years? Differences in credit quality from year to year account for much of the observed variation in default rates, but economic conditions and the “age” of bonds have also played a role.

Morningstar: – Hunting down income in unusual places. – Income-seekers are increasingly likely to find themselves invested in more unusual assets to mitigate their dissatisfaction with returns.

A Wealth of Common Sense: – What’s the worst 10 year return from a 50/50 stock/bond portfolio? – What would the worst 50/50 portfolio of stocks and bonds look like? This sounded like an intriguing idea so I decided to run the numbers.  Here are the results using 10 Year Treasuries as the bond proxy

Businessweek: – Fidelity reaps rewards as banks lose bond muscle. – While the U.S. Dodd-Frank Act’s Volcker Rule has curtailed the ability of banks to use their own money for trading, the biggest money managers have stepped in, using their growing buying power to absorb at a discount large amounts of bonds that get put up for sale. Those are opportunities that smaller buyers may never see.

Market Realist: – Must-know: Why invest your money in fixed income ETFs? – Fixed income as an asset class encompasses a variety of securities, including bills, notes, and bonds (collectively referred to as bonds henceforth), syndicated loans, and structured products.

Market Realist: – Investing in fixed income: What motivates bond investors? – We can understand the investment objectives of fixed income investors in terms of returns, risks, and constraints. There are two categories of investors.

ETF.com: – Swedroe: Fixed income’s low-risk anomaly. – There hasn’t been much debate about the default and term premiums in bonds. Yet investors have historically received very little in the way of compensation for taking default risk, and not much of a premium for taking term risk once you get beyond the intermediate term.

Blackrock: – The Life of a Bond (Infographic). – From creation to maturity, with interest rate fluctuations in between, the Blog explores bond basics.

Kiesel, Deputy CIO: We continue to see opportunity in airlines which are ‘flying’ now given improving pricing power and demand.

Lowest economist estimate for new home sales this morning was 428k, consensus was 450, came in at 384k