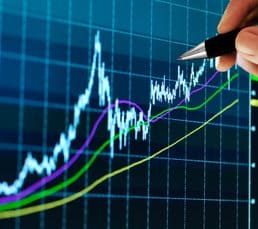 The market can react in strange ways to the release of economic indicators.

Here is a great list of economic indicators to start following

Released by the Bureau of Economic Analysis, the GDP is the single most important indicator. It is a measure of the total output of services and goods generated by property and labour located in the US. High GDP growth is considered an inflation risk and may spur the Fed to raise interest rates to prevent ‘overheating’. Slow or negative growth will call for reduction in interest rates to stimulate the country’s economy.  GDP is released once a quarter with an advance release (which may later be amended) 4 weeks after the quarter ends and a final release 3 months after the quarter ends. You can find the schedule for GDP releases here.

The CPI is published by the Bureau of Labour Statistics. It is a measure of the change over a fixed time-frame of the price of a basket of products as paid for by urban-dwelling consumers. It is one of the most significant measures of inflation. A high CPI points to rising inflation and will compel the Fed to push for higher interest rates.  CPI is released once a month around the 16th of the month.  You can find the schedule for CPI releases here.

Published by the Bureau of Labour Statistics, the Unemployment Rate is a measure of the overall unemployment rate as well as a breakdown by industry, occupation, reason for unemployment and duration of unemployment. Consistently low unemployment is considered an inflation risk and the Fed may move to raise interest rates. High unemployment on the other hand may compel a reduction of interest rates.  Released on the first Friday of the month for the previous month, you can find a schedule with Employment situation release dates here.

Published by the Department of Commerce, this is a statistic of the number of private housing units on which construction has commenced and the number of construction permits issued over a given month. The property market is a one of the key pointers of where the economy is headed – robust property construction is usually a sign of economic growth. The Fed may choose to increase interest rates to prevent inflation and potential housing bubble.  You can find the release schedules for housing starts and building permits here.

A report from the Federal Reserve’s FOMC that details the prevailing economic conditions from the jurisdictions of the 12 district Federal Reserve banks. Whereas the Beige Book is essentially a backward-looking publication, its content can provide hints on the future direction the FOMC is likely to take.  You can find the release schedule for The Beige Book here.