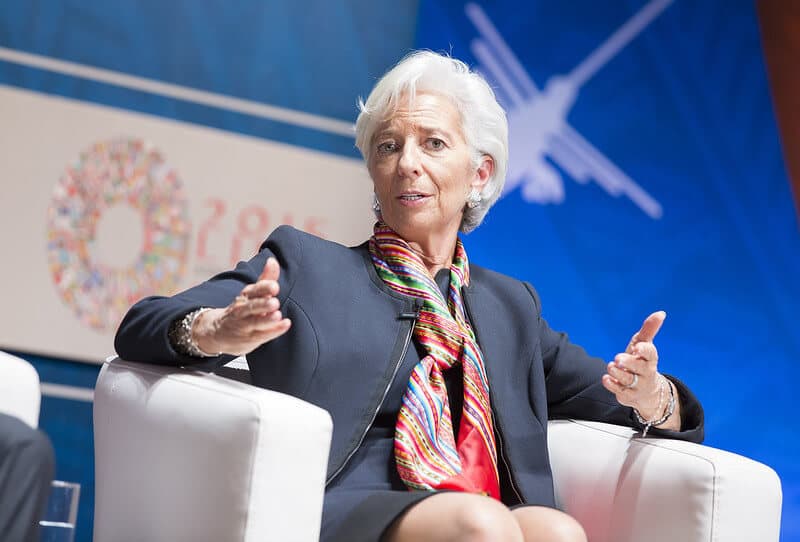 The European Central Bank (ECB) is under pressure to follow the US Federal Reserve and cut interest rates when it meets on Thursday, economists said.

However, the Bank led by President Christine Lagarde (pictured), has less room for manoeuvre than its US counterpart since successive efforts to stimulate the eurozone’s anaemic economy has left its main bank rate at zero.

The Frankfurt-based ECB has already said it is tracking the “fast-developing” coronavirus outbreak.

“The ECB is closely monitoring developments and their implications for the economy, medium-term inflation and the transmission of our monetary policy,” said the central bank in a statement on Monday. “We stand ready to take appropriate and targeted measures, as necessary and commensurate with the underlying risks.”

The virus has grown into an outbreak that is disrupting global supply chains, slowing industrial activity, grounding flights and hitting financial markets.

The Reserve Bank of Australia, Bank of Canada and Hong Kong Monetary Authority have all followed the Fed’s unscheduled half percentage point cut on Wednesday — and have lowered interest rates in March.

After the 2008 financial crisis, the ECB earned a reputation for being slower to spot trouble ahead and take action, compared to other major central banks. A slow response from the ECB may signal to investors that the central bank, still likes to sit on its hands under Lagarde, who took over four months ago from Mario Draghi.

However, the ECB will have to weigh up whether a sub-zero cut will only further panic investors. The Fed’s cut on Wednesday did initially boost markets, only to see them tumble by the end of the week.

Commerzbank expects the ECB to cut the deposit rate by 10 basis points and boost monthly bond buys by €20bn.

The German bank’s chief economist Joerg Kraemer said: “The ECB is likely to combine the interest-rate cut with an increase in the allowances in order to reduce the burden for the banks.”

Commerzbank also downgraded the region’s growth rate to 0.5 per cent, down from a previous forecast of 0.9 per cent.

However, other economists go further, forecasting the eurozone will slide into a recession in the six months to June — the first since the bloc’s sovereign debt crisis in 2012.

Decision on a knife edge

Economists at Dutch bank ING said a rate cut of 10 to 20 basis points is possible “if the situation deteriorates”, but makes it clear the decision rests on a knife edge.

ING said: “The ECB opted against a coordinated move with the Fed, signalling that policymakers would prefer to wait-and-see until next week’s official meeting, and then try to steer markets with words rather than action. It is currently hard to tell whether words will really be enough or whether the ECB feels forced into some action. A lot will depend on how the virus and financial markets evolve in the coming days.”

The ECB already restarted quantitative easing in November, at a rate of €20bn a month and the central bank’s balance sheet has now swollen to €4.7trn, or just over a quarter of the region’s gross domestic product.