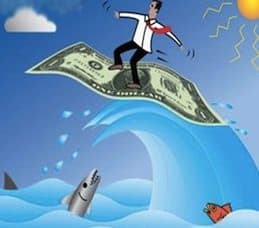 In his book, The Big Short, Michael Lewis describes in the following way how Danny, the head trader for Steve Eisman, approached trades that seemed perfect.

“When a Wall Street firm helped him to get into a trade that seemed perfect in every way, he [Danny] asked the salesman, ‘I appreciate this, but I just want to know one thing: How are you going to [expletive] me?”

As an investor who is quite active in the corporate bond market, it never ceases to amaze me how often retail investors get the short end of the stick when it comes to individual transactions. In general, when operating in both the corporate and municipal bond markets, I think retail investors would be wise to consider Danny’s sentiment. An experience I recently had only further solidifies this.

On August 12, I entered an order to purchase 10 bonds ($10,000 face value) of Limited Brands’ 7.60% coupon, July 15, 2037 maturing notes, CUSIP 532716AN7. The best offer shown on the broker’s platform through which I entered the order was 101.75. There were 640 bonds offered at the top of the queue with a minimum order of 2 bonds. But I was able to see a better offer available in the market at a price of 101.50. That dealer was offering 123 bonds with a 10 bond minimum. Typically, when I see better offers in the market, my brokers are able to grab those bonds for me even though the bonds aren’t offered through their network of dealers at that time.

After placing my order, I called my broker and asked the representative to contact the bond desk and let them know that there were bonds available in the market at my limit price. She put me on hold and came back a few minutes later. My broker’s bond trader, she explained, saw what I was seeing but was not allowed to lift that offer for me. The reason was that the exact same bonds were being offered on my broker’s platform. “Okay,” I thought, “just lift the offer then.” The problem was, the exact same bonds that were being advertised to Wall Street (through Bloomberg) at 101.50 were being offered to retail clients at one of my brokers for a price of 101.75. The Limited Brands’ bond had some very good market depth, and I originally didn’t focus on the bonds further down the queue. But once I did, sure enough, there were 123 bonds with a 10 bond minimum offered at 101.75. And according to my broker, those were the exact same bonds being offered to other investors at the exact same time at a better price.

Apparently, because the dealer was offering the same bonds on my broker’s platform, the bond trader wasn’t allowed to hit the offer on Bloomberg. I can certainly understand why that policy is in effect, and I don’t fault the bond trader or my broker. Instead, I think the dealer is engaging in activity that, while legal, is quite unscrupulous. The exact same bonds were being offered at different prices at the exact same time by the same dealer. The dealer was in effect marking up the bond just for certain retail investors (not for all investors), before any markup or commission occurred at the broker level. To make matters worse, I decided to still enter a limit order at 101.50 (that, after all, was the dealer’s best price), and the dealer never filled the order, instead deciding not to budge on a price that he/she was willing to accept from other investors on different platforms.

I realize that no one was forcing me or any other investor to purchase the bonds at 101.75. Dealers can certainly offer their best price at whatever price they choose. But the least I expect (perhaps wrongly) is to be able to have the confidence that the price a dealer is offering me (not my broker but the dealer) is in fact that dealer’s best offer for those exact bonds. Imagine if Apple’s stock was being offered at the exact same time for $467 at one retail broker, $465 at another, and $469 at a third. The different prices being offered by the same dealer on the exact same bonds is yet another example of how careful price-conscious investors need to be in the world of individual bonds.

Now back to Danny. After asking a trader how the trader would screw him over, the typical response would be “Heh-heh-heh, c’mon, we’d never do that.” But Danny would persist, “We both know that unadulterated good things like this trade don’t just happen between little hedge funds and big Wall Street firms. I’ll do it, but only after you explain to me how you are going to [expletive] me.” Then, as Michael Lewis described, “The salesman explained how he was going to [expletive] him. And Danny did the trade.”

I realize that when buying and selling individual corporate and municipal bonds, I am operating in an opaque system in which many questionable activities occur. And I assume things will remain that way for quite a while. But in the meantime, I will continue to keep track of all the, shall I say, “games” that are played with retail investors so that I can at least know when I am being screwed before making the decision to enter an order. For now, the benefits of owning a diversified portfolio of individual bonds still outweigh the frustrations that sometimes come with building that diversified portfolio.