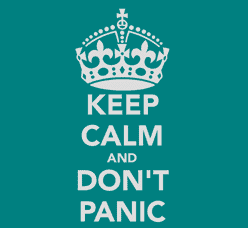 The Government is not at work and the ‘debt ceiling’ is fast approaching, but the message from The Economist today is “don’t panic”.

With the short term cost of debt financing quadrupling, from 3 basis points to 13 and the cost of buying credit default insurance against a U.S. default rising nearly sixfold, from 11bp to 64bp. The message seems to be one of concern rather than panic. “If traders genuinely felt they might be out of pocket, they would demand a lot more.” Says The Economist.

The fact is in times of economic uncertainty investors flock to the 10-year bond. Whilst it is possible to imagine a disruption to the T-bill market, the U.S. government would never allow the 10-year bond to be affected.

When Bill Gross was asked about the possibility of a default, he told CNBC’s Brian Sullivan:

“We are the reserve currency. Our central bank is the central bank’s banker. … And is there the possibility of a debt default, like I mentioned yesterday on your program?  Really, no — you know, I think it’s basically theatrics.”

In any case, the economic disruption caused by the budget stand-off makes it less likely that the Fed will begin to taper soon, which makes the case for bonds even more compelling.

The general consensus seems to be, that whilst there may be a small amount of disruption to the Treasury market, it will be short term only. So it doesn’t make sense to dump your Treasury holdings, only to buy them back later at a higher price.

Bloomberg: – Puerto Rico record yields luring buyers of distress. – Puerto Rico’s record-high yields are attracting investors who typically buy the riskiest municipal debt, in a sign of how dire the island’s finances have become as it prepares to borrow as much as $1.2 billion by year-end.

Learn Bonds: – Making sense of the employment / jobs numbers. – investors continue to prepare for an eventual acceleration of growth and inflation which does not appear to be on the horizon. This has caused a bifurcation among fixed income investors. Some investors want little or no risk and are holding large quantities of cash. Others are reaching for yield, almost recklessly. As with most things in life, the correct answer lies in the middle. Let’s break it down.

PBS Newshour: – Defaulting on U.S bond obligations could cause ‘mother of all financial crises’. – The Treasury Department warned in a report that if the government defaults on its obligations later in October, the economic impact could be widespread and even provoke another financial crisis. Annie Lowrey of The New York Times joins Judy Woodruff to explain the debt ceiling and potential consequences.

FT: – Treasury bill market hit by shutdown. – Investors stepped back from the Treasury bill market this week over concerns that the US government may delay interest payments this month as Washington appears well away from striking a deal that would raise the federal debt ceiling.

Bloomberg: – Hedge funds used obscure bond bet to win in GM bankruptcy. – General Motors Corp. (GM)’s bankruptcy, which wiped out shareholders and left taxpayers on the hook for billions of dollars, is generating a new wave of profit for hedge funds that supersized their claim by betting on an obscure pool of GM debt issued in the Canadian province of Nova Scotia.

TheStreet: – Peer-to-Peer lending is now Wall Street. – Over the past year, Eaglewood Capital Management has created an algorithm that works hand in hand with existing peer lending platforms to automatically identify loans meeting the criteria for institutional lenders. Those loans are funded by a single large pool of investments controlled by Eaglewood that so far runs north of $100 million. This pools earns return just like normal peer-to-peer loans, as lendees, who have 700-plus FICO scores and average borrower income of more than $90,000, pay off their loans in fixed payments over 36 months.

Wealth Management: – Finding yield in short duration bonds. – Bond investors have been racing for cover. During the first eight months of the year, shareholders withdrew $49 billion from intermediate-term funds and deposited $17 billion into short-term funds, according to Morningstar. Rising interest rates triggered the migration. When rates climb, shorter bonds are relatively resilient. Recently investors who moved to shorter funds have been rewarded. For the eight months, intermediate funds lost 2.7 percent, while short-term funds declined 0.4 percent.

IndexUniverse: – ProShares’ Sachs on hedging bond-duration risk. – Steve Sachs, head of capital markets for ProShares, thinks an ETF strategy that hedges duration risk is smart. He thinks it’s so smart that he believes it has a place in both domestic and international markets. The only thing holding investors back from reaping the benefits of a strategy like the ProShares High Yield–Interest Rate Hedged fund (HYHG) is an education gap.

IndexUniverse: – Short-Dated LQD, HYG Clones Near Launch. – iShares has updated its prospectus of two short-dated corporate bond ETFs that it put into registration in July—a high-yield fund and an investment-grade fund—complete with tickers and prices, suggesting the launches are coming soon. The funds will address investor appetite for shorter-duration debt as the era of ultra-low yields looks to be on the verge of beginning to end.

IndexUniverse: – WisdomTree Plans 8 Hedged Bond ETFs. – WisdomTree filed to offer eight fixed-income ETFs in different pockets of the bond world, each of which will have a short-selling Treasury overlay to mitigate interest-rate risks. The multiple filings come at a time when rates seem to be heading higher as the Federal Reserve looks to begin “tapering” its quantitative-easing (QE) policies in place since the financial crisis of 2008.

Potential muni bond volume for next week should total $3.76B, from $2.79B this week, per Ipreo, The Bond Buyer and Thomson Reuters.