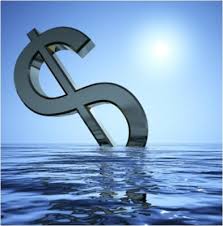 Olivier Blanchard, chief economist at the IMF and on leave from the economics department at MIT, has also talked about deflation in recent days. Basically, he commented on the data that was behind the remarks of the managing director.

In his discussion he mentioned that in an deflationary environment, you would have higher real rates of interest and debt issuers, both public and private, would face a greater burden in having to pay back loans in depreciated money. Both of these possibilities could lead to further deflation because they would have the effect of causing an even greater slowdown in economic growth.

In the January 17 edition of Barron’s Gene Epstein, titles his column, Economic Beat, “More Disinflation Lies Ahead.” In that issue of Barron’s, a former Barron’s columnist, James Grant, is quoted talking about the fact that so much debt, public and private, is outstanding, that there is a real deflationary bias in the economy right now. “Debt is a force for deflation,” he argues, because “Encumbered firms produce to remain solvent. Heavily encumbered firms overproduce. Overproduction presses down prices.”

So, the issue of disinflation and deflation are on the table and need to be discussed.

For example, the “nominal” yield on the 10-year US Treasury security is around 2.85 percent. If the actual rate of inflation, measured by the Consumer Price Index (CPI), rose from December 2012 to December 2013, by 1.5 percent, then the ex post real rate of interest is 1.35 percent.

Mr. Epstein in his article in Barron’s writes that “The 2013 December-to-December increase of 1.5 percent (in the CPI) was down from a 1.7 percent increase in 2012….And both of the past two years’ increases were much lower than the 2.4 percent average annual rise over the past 10 years.”

In prices were actually to fall, we would have the situation where a 2.85 percent nominal yield on the 10-year US Treasury security would translate into a “real” rate of interest of 3.10 percent if the rate of deflation were 0.25 percent.

In terms of the real value of the debt outstanding, a decline in prices would mean that the person or government in debt would have to pay back the principal of the amount borrowed in dollars that bought more goods than when the borrowing took place. This means that the real cost to the borrower of paying back what he borrowed would go up, placing a more of a burden on the borrower than what he had obtained in the first place.

Where are we now?

In over the past few months I have written about bond interest rates from the expectations, or ex ante, perspective, not from the ex post standpoint as was done above. I used the yield on the 10-year US Treasury Inflation Protected security (TIPS) as a proxy for the ‘”real” rate of interest. Currently, this security is now yielding right around 0.55 percent.

The yields on these two securities tend to move roughly in parallel with one another so that it can be said that the market’s “inflationary expectations” are relatively stable. They do change over time, but the movement tends to be incremental rather than highly volatile.

If anything the market’s expectation for inflation has risen over the past year. For example, at the end of 2012 and the first half of 2013, “inflationary expectations” averaged around 2.50 percent. So, expected inflation for the longer-term, has come down, but not by much.

The implication for the longer-run is that the efforts at quantitative easing on the part of the Federal Reserve is expected to result in more inflation over time, even though there might be some disinflation over the near-term.

I like to use the second method because it incorporates the market’s expectation of what future inflation might be and I like to think that business people make decisions based on what the future has in store for them rather than on what the past has actually been.

Current one-year rates of actual inflation may be declining, as they have been in recent years. As a result, future expectations of inflation over time have fallen, but the market still believes that the Fed’s efforts at monetary easing will still dominate over time and eventually lead to rising rates of inflation. I believe that this conclusion is the one that is more consistent with the current situation.