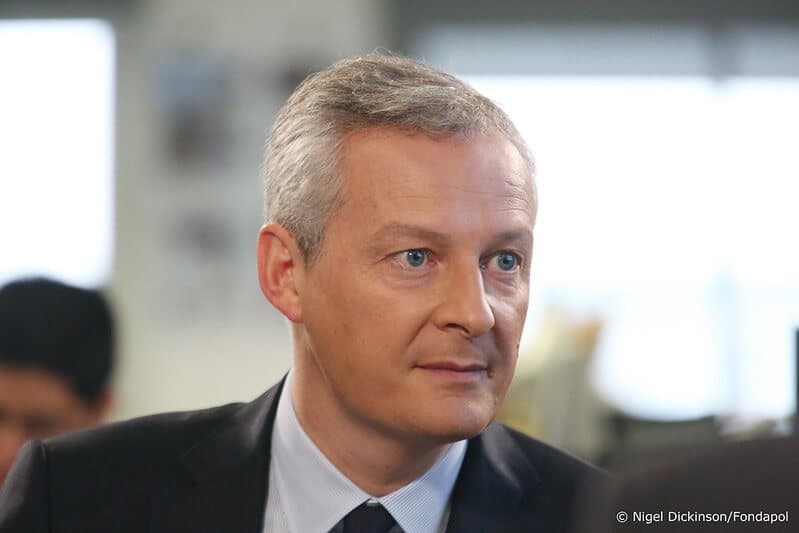 France said it still plans to impose digital taxes on giants like Amazon, Google and Facebook unless a new international system is in place by the end of this year.

French President Emmanuel Macron agreed to set aside the tax following a phone call with US President Donald Trump (pictured) earlier this week.

America says this tax unfairly targets US firms and had threatened to impose tariffs of up to 100 per cent on $2.4bn worth of French imports including products such as champagne and Roquefort cheese in return.

But French finance minister Bruno Le Maire (pictured) insisted on Thursday that the tax on large tech firms in France had only been suspended, pending an international agreement brokered by the Organisation for Economic Cooperation and Development (OECD) by the end of 2020.

However, Le Maire added that if an international deal was not in place, France would impose its own digital levy.

“The digital companies in France will pay their due taxes in 2020, let me be very clear about that, ” said the finance minister who was speaking at the 50th World Economic Forum in Davos, Switzerland.

Le Maire added: “There is a loophole in the international taxation system. The loophole is digital activities. The biggest companies in the world are making huge profits with millions of consumers in territories where they do not pay their due taxes. Nobody can accept that, and we will never give up.”

The French levy, introduced last year, imposes 3 per cent sales tax on tech firms who generate more than €750m in sales a year.

Britain is due to launch a tax on digital firms with global sales exceeding £500m, and at least £25m worth of UK sales. These firms must pay a 2 per cent tax on their British revenues.

Italy, Austria and Turkey and as many as 40 countries have all drawn up plans for their own digital taxes. Tech giants have been accused of exploiting loopholes to take billions in profits from consumers in wealthier nations and funnel them into low-tax havens.

But OECD secretary general Angel Gurría said all of these countries imposing their own rules would lead to a confusing “cacophony” of tax rules.

He said the OECD had been working with 137 countries for the last two to three years on this problem, and was “on track” to agree a global deal by the end of the year.

Gurría, also in Davos, said the “focus” of the whole of the organisation is on a new deal, adding “we have no plan B, we have to get it done”.

These discussions will remain tense, as the US has threatened the UK and other countries over their plans to introduce national digital taxes if global talks fail.