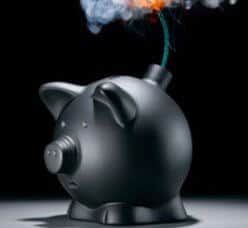 Corporate bonds seemed to come out of this summers bond swoon in better shape than other sectors of the bond market. Why? Well we have to thank Verizon for that. Their $50 billion bond sale added wind to the investment grade sector as a whole.

But come the Fall, equity markets recovered and corporate spreads began to tighten again. Now, according to Sober Look, corporate bonds are back in frothy territory, similar to that which existed before the Fed struck a more hawkish tone in May.

Sober look says, “Perhaps some of the more publicized signs of corporate credit markets overheating have been the loosened underwriting standards in the syndicated loan market. The so-called “cov-lite” loans often limit the lender’s’ ability to take corrective action with the borrower when the company takes a turn for the worse. And the number of such deals has reached new highs.”

For the moment, investors don’t seemed too concerned by the mountain of corporate debt hiding in their portfolio’s. If its investment grade it must be good right! Sober Look finishes off by saying. “It’s not 2006 quite yet, but we are certainly moving in that direction.”

Investopedia: – An unprecedented opportunity in municipal bonds. – After one of the most spectacular runs in their history, it seems that the wheels are falling off the municipal bond train. Fears about the Fed’s tapering and rising interest rates, as well as some high profile city defaults have caused many investors to begin dumping the normally sleepy bond sector in spades. Outflows of popular muni funds- like the Market Vectors High-Yield Muni ETF–have been swift and several analysts have cautioned that more could be in store.

Bloomberg: – Ciccarone focuses on Merritt as retirement includes web. – Richard Ciccarone, chief research officer at McDonnell Investment Management, will focus on his other companies tracking local governments and the $3.7 trillion U.S. municipal market when he retires from the firm at the end of the year.

Forbes: – Need a stocking stuffer for the income searcher on your list? Look no further than munis. – While the demand for municipal bonds might seem tepid to some, the market appears to be gaining a boost of energy from a convergence of events. Baby boomers are moving into retirement, low interest rates make it difficult to get income, there was a summer sell-off in fixed income – particularly in munis – and new tax rates as well as the phasing out of certain deductions are going into effect. It all adds up to a major push to seriously consider munis.

Cate Long: – The search for real budget numbers. – Many state revenue reporting metrics, like the Rockefeller Institute’s, only show state tax collections and do not include other funding sources like federal monies. So it’s often hard to get a complete picture of state fiscal health. NASBO has been collecting state revenue data since 1987 and reports that 2012 saw the first decline in total state revenues. In contrast Rockefeller Institute has been reporting increasing state tax revenues for 13 quarters since 1Q 2010.

Learn Bonds: – Quantitative easing and bonds. – You may have noticed that when the Federal Reserve began the program called “quantitative easing” that your Treasury yields started to falter, eventually becoming negligible.  Now it hasn’t been all bad, because you probably also noticed that the price of your Treasury bonds went up.  This article will explain what’s going on, and what you can do to replace Treasuries that aren’t yielding anything.

Geoff Considine: – Treasury yields de-coupling from other bonds. – As part of an ongoing discussion of the frontier of yield vs. risk, Geoff examines the bond asset classes–and they are very interesting.

FT Alphaville: – Why front-end TIPS are performing poorly. – U.S. 10-year Tips are feeling the full brunt of taper-talk. First there was an abrupt sell-off on Wednesday in the 30 year sector, with break-even rates moving lower across the whole Tips spectrum after the US consumer price index fell for the first time in six months. Then there was a swift recovery with strong auction demand on Thursday following the Philly Fed.

Bloomberg: – AT&T to Mylan lead surge in U.S. bond sales to 27% above average. – AT&T Inc. (T) and Mylan Inc. (MYL) led bond sales of $38.1 billion in the U.S. this week, 27 percent above average, as issuers lock in borrowing costs at about record lows, speculating that the Federal Reserve may start to curtail stimulus early next year.

24/7 Wall St: – Junk bond spreads have tightened handily again. – 24/7 Wall St. has not been covering the junk bond market as much of late because spreads were in a narrow range for quite some time. That was then. The 10-year Treasury note hit a 2.80% yield in the middle of this week and has only just now find buying support enough to bring it back under 2.8% again. This marked the highest yields since mid-September as the worries are growing all over again about when the bond purchasing will begin to be tapered.

OptionMonster: – Caution reigns in junk-bond fund. – Junk bonds have been struggling as interest rates rise, and one investor is afraid that they might get trashed.

Investment Europe: – Petering out liquidity weighing on emerging markets, bonds and gold. – While the economic recovery now under way in the developed world will gain additional momentum in 2014, major emerging markets are still dealing with the cyclical downturn they experienced this year, according to Julius Baer.

Reuters: – Analysis – Counting the cost of currency risk in emerging bond markets. – Once a source of rich returns for yield-hungry investors, emerging markets are hammering home a long-ignored truism: banking on currency strength to enhance returns on stocks and bonds is not a one-way ticket to profits.

Emerging Markets Daily: – Capital flowed out of EM bonds funds again, EM bond outlook not bright. – For the week ending November 20, capital continued to flow out of emerging markets bond funds. A total of $1.4 billion, or 0.6% of asset under management (AUM), left, across local and hard currency funds.

David Fabian: – Buy ETFs to beat the tax man. – With less than six weeks until the end of the year, investors should start doing some tax planning on their taxable investment accounts to ease the burden of capital gains. Many advisors recommend different strategies to tackle this situation ranging from selling losing positions to gifting investments. The right strategy for you will ultimately depend on your individual mix of income, deductions, investment vehicles, and other factors.

Morningstar: – Bond funds for your portfolio. – Bonds may not be performing as well as equities, but fixed interest is an important part of a well-diversified portfolio.

Bloomberg: – Long-bond gains seen short-lived as Fed taper nears. – The biggest rally in 30-year state and local debt since June may be fleeting amid signs the Federal Reserve will begin cutting back its bond purchases, leading to higher interest rates.

Investment News: – Vanguard: Look overseas to lower interest rate risk. – Interest rate risk has conservative bond investors spooked and looking at lower-quality fixed income for comfort, but the real salve may be outside the United States, according to The Vanguard Group Inc.

InvestorPlace: – Bonds look steady…At least for now. – Grizzlies on the loose!  Bond bears are snarling and flexing their claws, especially after Wednesday’s release of the October Federal Reserve policy minutes.  “Fed’s gonna taper,” the bruins growl.  “Interest rates have nowhere to go but up.”

ETF Trends: – Big bond ETF faces critical test. – The iShares 20+ Year Treasury Bond ETF, home to over $2.76 billion in assets under management, has lost almost 14% this year amid fears of rising interest rates. TLT is now facing a critical technical test that could have a major impact on its near-term fortunes.

Equities.com: – Beating the best mutual funds: Fidelity inflation-protected bond portfolio optimization. – In a similar pattern to the last few weeks, we are moving away from simply Equity-based Mutual Funds to optimize, and exploring some more interesting areas of the market. Today, we will focus on the growing TIPS (Treasury Inflation Protected Securities) fixed income market, and the Fidelity Inflation-Protected Bond Fund.
https://twitter.com/PIMCO/status/403917081911230465

Potential volume for the holiday week should total $538.2M, from $6.20B this week, per Ipreo, The Bond Buyer and Thomson Reuters.

muni pricing services are awful these days on the short end of the curve – buyer beware – " I don't see" ?