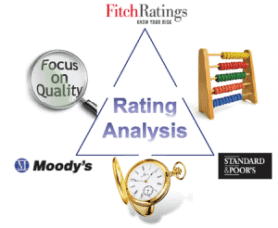 (July 2012) There are some good reasons why many people no longer trust the rating agencies.  Not only did they not see the collapse of the housing market coming, but they inflated their ratings to boost their bottom lines.  However, these issues don’t apply to corporate bonds. The major rating agencies actually have an excellent track record of getting corporate bond ratings correct.

Why are the rating agencies better at rating corporate bonds?

There is a saying, “Sunlight is the best disinfectant (against corruption).” In other words, when a person, government or company is under scrutiny they tend to exhibit better behavior.  Most corporate bonds are issued by publicly traded companies, which makes it easy to see if there might be an inflated rating.  If a stock price decreases by half and the rating does not change, the rating agency will need to have very good reasons for not revising its rating.  Public companies also generate quarterly financial data. While there is some “art” to credit ratings, a good portion is related to crunching numbers. As all the information is in the public domain, the credit agencies must respond to the data.

How good are corporate credit rating as an indicator of the potential for default?

The short answer is that corporate bond ratings are highly predictive default rates. When looking at ratings from Standard and Poor’s (S&P) over a range of 30 years (1981 – 2011), you will see a direct relationship between lower ratings and higher average annual default rates.

As you can see from the tables above, as the rating drops one notch, the default rate will remain steady or increase.  No corporate bond rated AAA or AA+, the two highest credit ratings, defaulted over this time period.  On the other side of the spectrum, bonds that have a rating that start with C have an average annual default rate 24%.

(Editors note: While the above tables show that the rating agencies have a strong track record with corporate bonds, they also need a couple of caveats. Bond ratings change over time. For example, there is a chance that AA rated bond will have its rating lowered over time before it defaults.  Secondly, these are average annual default rates. If an investor buys a bond and holds it for a period of ten years, the expected default rate would be a multiple of the annual rate.)

Have a question about credit ratings that we did not answer?  Leave a comment in the comments section below and we will do our best to help.