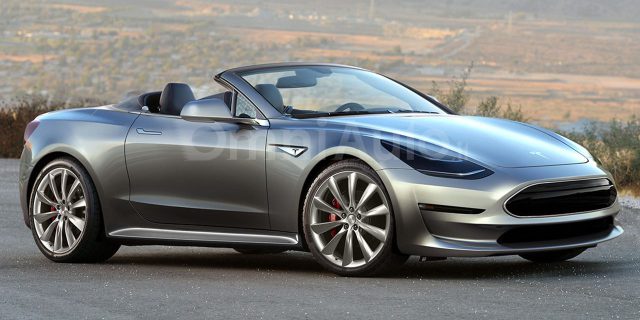 The end of the decade could see Tesla Motors Inc roll out its next generation Roadster. According to Electrek reports on the matter, revealing images the suggest that the car could  be based on the upcoming Model 3 and should arrive by 2020. The company’s debut vehicle has also been confirmed to be making a comeback by officials at Tesla

This recent report adds more rumor to the highly anticipated EV beyond the Model 3. There isn’t much that is publicly known about Tesla’s next Roadster. An executive of the electric car maker described the new Roadster as “different faster and bigger.” It is only now that the EV world learns the car could be based on the upcoming Model 3.

Renderings of the electric car’s potential look have been made by Omni Auto. In them their creator brings to life the vision of a Model 3-based Roadster. Using the Model 3 as a platform is not far-fetched considering the company’s recent moves to produce more in-house parts for its EVs. The chassis of the original Roadster was borrowed from Lotus, and Tesla isn’t likely to revert to the British car maker this time around.

The depictions by Omni Auto show an easily appealing car that flaunts a shy resemblance to the Tesla Model 3 concept. The cheaper EV’s platform could be incorporated as shown above, which suggests the next Roadster could be a lot more affordable than fans might anticipate.

The Model 3 is expected to be Tesla Motors’ most afforadable vehicle yet. It goes for as low as $35,000 before incentives. For investors it is highlighted as the car that will push the luxury car maker out of the red.

CO Elon Musk has been struggling to turn the company’s fans into consumers and the barrier formed by its steep prices are part of the problem. Now the company is finally amassing enough resources to make their mass-market car a success. It has gathered around 400,000 orders and is only due to be built next year.

Tesla Motors is reported to be pushing out the first batch of Model 3 orders in late 2017. The revamped roadster could the car Elon Musk and co. unveil after their cheap Tesla.