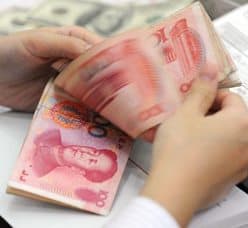 This was followed today by news that Xuzhou Zhongsen Tonghao New Board Co Ltd, a small construction materials company failed to pay interest on 180 million yuan ($29 million) of bonds, marking China’s second default on a domestic bond in a matter of weeks.

The news underlines fears of rising credit risks in China, partly fuelled by signs that the economy is slowing down, especially the real estate sector, a key driver of growth.

It also comes at a critical time for emerging market bonds, which have suffered so far this year, following the Fed’s announcement that it will start tapering the amount of bonds it purchases as part of its economic stimulus package, known as Quantitative Easing.

Emerging markets were just starting to get back on their feet following the first quarter sell-off.

The last thing they need is a wave of Chinese bond defaults making investors nervous. But, far from being concerned about potential defaults, investors can’t seem to get enough emerging market debt.

“Investors have stopped the wholesale selling and are starting to ask themselves where they can find value in EM debt,” Market Vectors Fixed Income Portfolio Manager Fran Rodilosso said.

“There has been a lot of attention paid to recent corporate defaults in China, we expect to see more of these and accept it as a part of the rationalization of the local market and the normalization of the flow of capital.” Rodilosso went on to say.

The fact is that defaults are a necessary part of efficient debt markets. The current situation marks a painful, but necessary shift for the world’s second largest economy to fulfill Beijing’s ambition to cut wasteful investment and secure more balanced long-term growth.

So far at least, the signs are that investors are taking it in their stride. In the short term, there will be more Chinese defaults, particularly in high risk areas such as semiconductor and white goods manufacturing.

But banks are growing more aware of the risks and rather than pull the plug on teetering firms, some bankers say they prefer a slow exit to keep them afloat for as long as possible to claw back their loans.

So whilst there may be some short term pain, the net result should be stronger Chinese companies better able to compete on a world stage. Which can only be a good thing, for both China and Emerging Market investors.

CNBC: – Miami’s muni bonds: Safe or sorry? – Mami is bouncing back from its foreclosure crisis, but CNBC’s Scott Cohn reports the city is at the center of a 4-year SEC crackdown on municipal bonds. With the former budget director and city already being sued, the SEC is also looking into the Miami Marlins baseball stadium, which was mostly paid for by tax dollars.

Transamerica: – Municipal bonds and tax-equivalent yields. – When building a portfolio, it is important for investors to take into account the ability of various investments to build wealth over time (their growth potential) as well as their potential to generate income.

GFOA.org: – Facts you should know: State and municipal bankruptcy, municipal bonds, state and local pension. – The spotlight on notable cases of municipal fiscal stress has led to many misperceptions about the overall financial condition of state and local governments. To address this concern, organizations representing the nation’s governors, state legislatures, and state and local officials jointly released the 2014 edition of Facts You Should Know.

Bloomberg: – Gross joins bond investors in North Las Vegas crosshairs. – Once among the nation’s fastest-growing municipalities, the city located less than 10 miles from the famed Strip has seen its property taxes collapse 70 percent since 2009. Funds run by Bill Gross, co-founder of the world’s biggest bond manager, hold almost a fifth of the municipality’s $420 million in general obligations, data compiled by Bloomberg show. The bonds were cut to junk by Standard & Poor’s in March after a judge ordered the city to pay unionized workers raises withheld during a fiscal emergency declared two years ago.

LearnBonds: – Why did long-term rates fall last week? – This time last week, the buzz in the fixed income markets was about the spike in rates which followed last week’s FOMC meeting. Less dovish comments, both in the FOMC statement and from Fed Chair Yellen during her press conference, pushed yields higher throughout most of the yield curve. However, a funny thing happened on the way to higher rates.

Fox Business: – Investors fleeing Treasury ETFs. – The first two months of the year saw money flowing into U.S. government debt ETFs, as investors were not scared off by the Fed taper.

FT Adviser: – Current corporate credit environment is a ‘sweet spot’. – Strengthening economies and liquidity are plentiful, presenting investors with a number of options.

ETF.com: – Bogle: Tilt to corporates for more yield. – John Bogle, Vanguard’s founder who built a second career as an author and the conscience of American capitalism, is still vigorous and relevant at the age of 84. As always, Bogle counsels investors to keep their focus on the long term, and to try to look past the near-term distractions in markets.

Bloomberg Brief: – Low-cost funding fails to lure high-yield issuers to market. – The average cost of capital for U.S. high-yield issuers is near an all-time low, at 5.3 percent, according to BAML data. This is well below the index average 2004-2014 of 8.7 percent, following five years of easy-money policies by central banks that caused investors to pour unprecedented amounts of money into high-yield bonds.

IFR: – U.S. high-yield prints US$2.3bn on quiet day. – The US high-yield market got off to a steady start on Monday with two deals pricing for a combined US$2.3bn, and at least three more in the pipeline for this week.

Mitch DeVan: – High-yield global income funds offer stability during times of market uncertainty. – The first quarter has come to a close and the market looks very nervous. There has been a similar pattern to the trading days the past couple of weeks. The averages open higher, make their highs for the day before 11:00 AM EST, and then sell off until the close. Market breadth has not been good and the market does not look very strong.

Fundweb: – How emerging market turmoil is impacting investment within M&G Global Macro Bond. – The M&G Global Macro Bond fund has kept a significantly underweight allocation to fixed income and currencies in this region for some time based on my concerns about China’s economic slowdown, the potential for a huge reversal of capital flows and the deteriorating current account balances of many developing countries.

Tom Madell: – Investors’ choices of funds/ETFs tend to underperform. – In this article, I will show that the funds and ETFs most frequently chosen by investors do not, on average, have a particularly good long-term track record as compared to randomly chosen funds. In fact, over the last five years, investors could have achieved better returns instead by using a rather surprisingly simple method.

Investopedia: – The time for short duration bonds is now. – As the economy imploded back in 2008/2009, the Federal Reserve did everything it could to reignite growth. That included sending short term interest rates down to the basement for the last five years or so. In order to get any sort of real yield in the current low rate environment, investors have been forced to go out on the maturity ladder and into longer-dated bond funds like the iShares 20+ Year Treasury Bond.

ValueWalk: – Q2 fixed income outlook – Hitting for the cycle. – We have started to reduce exposure to high-quality bonds with limited upside potential and high-yield bonds in which credit risk appears too aggressive.

CNBC: – Bill Gross isn’t the only bond manager losing assets. – The new year has not been kind to Bill “Bond King” Gross, but he is not alone.

Businessweek: – Vanguard beats BlackRock winning most ETF money in quarter. – Vanguard Group Inc., the third-biggest provider of exchange-traded funds, gained ground on larger competitors this year after gathering more than seven times as much money into its ETFs than the rest of the U.S. industry combined.

Barclays Agg Bond Index finishes Q1 up 1.8%. Nice quarter for bonds but that is unsustainable. Expect a slowdown.

In contrast to March, April has been a positive month in recent years for #municipal performance. The last negative April was in 2006