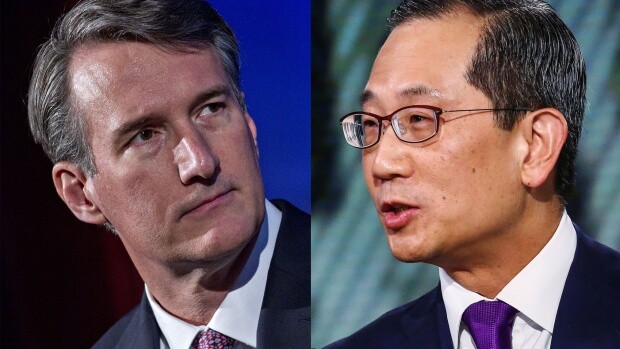 Carlyle Group co-chief executive Glenn Youngkin (pictured, left) announced he is stepping down after less than three years at the helm. This move will see Kewsong Lee (pictured, right) taking over as sole chief executive of the private equity giant in the middle of the coronavirus pandemic.

The abrupt exit, announced last Tuesday, leaves the $217bn asset manager under the control of Lee, who joined in 2013 from rival Warburg Pincus, where he spent 21 years.

It also sees Youngkin, 53, leave after several decades at the company he joined in his 20s. He is said to be focusing on public service while the firm’s prominent initiatives of recent years, including growing its credit and insurance businesses, are already under Lee’s purview.

Since 2018, Lee, 54, and Youngkin had been co-managing the company after assuming full operational control from the firm’s pioneering founders — David Rubenstein, Bill Conway and Daniel D’Aniello.

This was seen as an unusual management model, especially since rivals such as Blackstone Group, Apollo Global Management and KKR have elevated their next generation and laid out succession plans, but stopped short of handing over the reins completely.

For New York-based Carlyle Group, the first quarter brought about its biggest loss as a public company but the company said it’s prepared to handle a crisis with a wide range of outcomes.

During Youngkin’s tenure, Carlyle Group surpassed a $100bn fundraising goal and transitioned to a C-corporation from a publicly traded partnership. The firm had $217bn of assets under management at the end of the first quarter.

Revenues have been fluctuating in recent years, reaching $3.38bn last year, a 39% increase from the previous year but an 8% dip from 2017. This saw the company’s stock undergo various rating changes with Morgan Stanley raising its target price to $29. Carlyle Grop (GC) currently trades just below that line at $28.71.

Lee said in an interview with Bloomberg that he expects it to take years for the global economy to recover from the pandemic and that the US economy, in particular, will face more challenges than that of China.

The change in management structure comes at a turbulent time in the economy and capital markets as asset managers are trying to assure investors that their portfolios are able to withstand the crisis and capitalize on opportunities that might arise during the turmoil.

Many investors find the moment to be opportune for shorting stocks or trading commodities and gold. We also offer a selection of ETF brokers you can invest with.