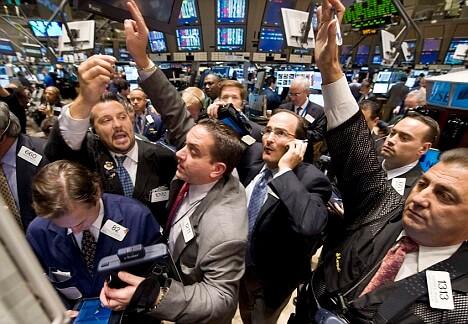 US stock markets were suspended as investors feared an economic slowdown caused by coronavirus will tip the global economy into a recession.

Stock trading was halted for 15 minutes early on Monday morinng after the S&P 500 plummeted more than 7% in the first minutes of trading. The suspension was caused by an automatic circuit breaker that kicked in to prevent a free fall on the market.

The price crash came after the oil price collapse of more than 30 per cent in Asian trading, leading to a massive selloff in Asian and European stock markets. Japanese, European and London stock markets lost close to 5% of their values in early Monday trading.

The selloff was prompted by a price war launched by Saudi Arabia after Russia refused to cut oil production. US WTI crude fell to as low as US crude fell to $27.34, its lowest level since February 2016.

Trading has since resumed, but the S&P 500 and Nasdaq are currently more than 5% lower.

US President Donald Trump responded to the US market fall in a series of Tweets. He blamed Saudi Arabia, Russia, and fake news reports for markets crash, but he added that lower oil prices are good for consumers.

The price and market share war between the largest oil producers wiped off hundreds of billions of dollars from stock markets around the world.

Analysts claim that this could be one of the fastest ever collapses into a bear market. The S&P 500 is down close to 17% to 18% from the highest level that it had hit on February  19, 2020 – which was just three weeks ago.

Energy stocks are leading the selloff with Petrobras (NYSE: PBR) losing a quarter of value while Occidental Petroleum (NYSE: OXY) shares slump 35 per cent – the biggest one-day selloff on record for both companies.

“In just over two weeks, investor sentiment has swung from complacency to panic,” said Paul O’Connor, a portfolio manager at Janus Henderson Investors. “What started as a virus-driven de-risking has now mutated into a broad-based, multi-asset capitulation,” he said.

Government bonds lifted as investors piled into the relative safety of sovereign debt and braced for more support from central banks, prompting the sharpest rally for US 10-year Treasuries in more than a decade.

The 10-year US Treasury bond yield tumbled to a record low of 0.318 per cent before rebounding to 0.528 per cent. The 30-year US Treasury yield dropped below 1%, taking the entire US yield curve below that level for the first time.

Find more information about how to buy and trade oil stocks in our stock trading guide here.