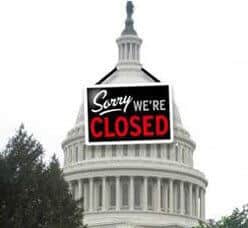 Democrats and Republicans have until midnight to reach an agreement on budget spending, if they fail to do so the U.S. government will shut down for the first time in 17 years. This could mean 800,000 federal employees put on temporary leave.

How markets react, will depend on the length of the shutdown. Most analysts agree that if a shutdown does occur it isn’t likely to last very long.

“The government of the U.S. may shut down for a day or two, but it will survive. Buy aggressively… take advantage,” said Clifford Bennett, managing director of the White Crane Group.

But whilst a shutdown will have some pretty big implications, there is one part of the market that could see a boost. The bond market.

Paul Bloxham, an economist at HSBC, “believes the U.S. government is headed for a shutdown, which could see a rally in bond markets.”

“The only winner we can see in this mess is the bond market, once again a safe haven as Treasury 10-year yields fall to 2.5% or perhaps lower. Bonds will benefit as GDP estimates fall — but even Treasuries could come under assault as a debt crisis looms in mid-October.”

As Valliere points out though, any rally in Treasuries could be short lived. Because when this crisis has rescinded, there is another one waiting in the wings. The debt ceiling.

Republicans said last week that they would not agree to lift the debt ceiling unless implementation of Obama’s controversial health law was delayed by one year. So the government is also headed toward a mid-October default on its debts — and a full-blown constitutional crisis. Which would be disastrous for Treasuries.

Reuters: – Puerto Rico’s bond losses hit local investors. – The steep decline in prices of Puerto Rican bonds on the American municipal bond market is taking a heavy toll at home, where local institutions and individuals own an estimated 30 percent of the $70 billion of outstanding bonds.

Bloomberg: – Cuomo hurdles voters to seek AAA in $1 billion sale. – Governor Andrew Cuomo plans to sell $1 billion in bonds backed by sales taxes for the first time in 18 years as New York debt outpaces the $3.7 trillion municipal bond market by the most in two months.

Cate Long: – Will Stockton go the way of Vallejo? – Late Friday, the City of Stockton, California released its “Plan of Adjustment” for how it intends to treat its creditors in bankruptcy. The plan has been in the works since the city filed for protection under chapter 9 of the United States Bankruptcy Code on June 28, 2012. Will it be enough?

MuniNetGuide: – The new risk/reward equation in munis. – All eyes are on Washington this morning as market participants focus on the potential government shut-down and the fiscal restraint that is bound to come out of current budget negotiations. All of this uncertainty has had the expected effect of pressuring equities and maintaining a firm tone in Treasuries.

Vanguard: – Bond risk—A theory of relativity. – Risk is a relative term. If someone asked you to set aside $150 a month, possibly with no return on your investment, you’d probably say, “No way!” Yet what if you knew the alternative was losing your home and all of your belongings in a fire, flood, or other emergency, with no funds to help rebuild your life? Suddenly, the $150-per-month payment for disaster insurance might seem like a good idea.

ETF Daily News: – New life for Treasury bond ETFs? – These are trying times for the fixed income world, in particular the U.S. Treasury market, as investors are pouring money into the rising equity markets since the start of the year. Plus, market apprehensions relating to the Fed’s possible announcement of scaling back some of its asset purchases in the September FOMC meeting took a toll on the bond markets for a couple of months.

WSJ: Yielding to new realities for government bonds. – From February to May, a rally in U.S. Treasurys, German bunds and U.K. gilts saw German yields hit record lows; from May to September, a selloff pushed U.S. and U.K. yields to two-year highs. Now, the Federal Reserve’s decision not to reduce its bond purchases has driven another move lower for yields. Eventually, yields should head higher again. But in the short term the outlook is decidedly murky.

MarketWatch: – The junk bond credit clock is moving slower this time around. – Cries of a credit bubble appear to be coming back into vogue. But in the high yield bond market at least, if there is a bubble, the chug toward any sort of pop appears to have been slowed down by a lethargic economy and a responsive Federal Reserve.

Barron’s:  – Time to buy emerging-market debt. – Seventeen straight weeks of outflows from emerging-market bond funds have created both more-rational sentiment and decent valuations. Investors can feel safe jumping back on board.

ETF Trends: – Green shoots appearing, sort of, for EM bond ETFs. – Exchange traded funds offering exposure to emerging markets debt, both of the dollar-denominated and local currency varieties, are among this year’s most downtrodden funds. Spooked by increased borrowing costs for developing economies that lived off the fat of the Federal Reserve’s ultra-loose monetary policy, investors have not been shy about pulling cash from emerging markets bond funds.

FT: – PRA highlights catastrophe bond risks. – A top UK regulator is preparing to speak out for the first time about the risks facing insurance companies by a flood of money pouring into the industry as investors snap up esoteric securities such as catastrophe bonds.

Zacks: – Guggenheim launches 2 more high yield BulletShares ETFs. – A number of ETF issuers have launched new products lately, bringing the total number of funds just over the 1,500 mark. While a few of these funds have been targeting brand new niches, there has also been a rising trend of ‘getting back to basics’ for issuers, as many have looked to round out lineups and plug up any weak spots.

Barron’s: – Nearly half of investors say they don’t chase yield. – Lots of investors are concerned about low bond yields, but fewer than half have actually done anything about it, a new Guggenheim Investment survey suggests.

Motley Fool: – 3 Facts you need to know about the bond market. – The bond market has traditionally been a safe place to invest without the huge volatility that stocks usually have. Lately, though, bonds have been downright dangerous. To protect yourself, you need to know some key facts about bonds.