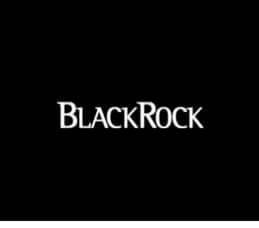 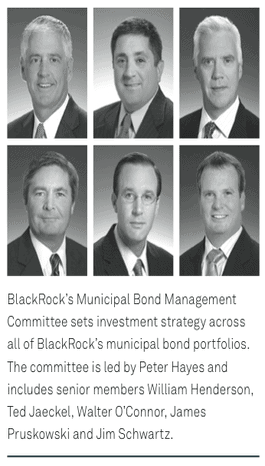 July was a favorable, if uneventful, month for municipal market performance. Munis enjoyed a slow grind in the right direction, with no single event propelling the market forward. Returns were positive across the curve as rates fell and prices correspondingly rose, and as demand remained robust. Tax-exempts also performed well relative to US Treasuries, which continued to experience greater volatility. As a result, muni-to- Treasury yield ratios remain attractive — above 100% in all maturity ranges. In other words, munis are outyielding Treasuries before tax, increasing their after-tax appeal.

New issuance totaled $27.8 billion in July and $220.8 billion year-to-date. Supply is up 53% on a year-over-year basis, although the majority continues to represent refunding issues, which are easily absorbed by the market. As has been the case for some time, issuance was unable to satisfy demand, and this continued imbalance contributed to the market’s strong performance. Municipal bond mutual funds saw inflows throughout the month, with high yield and long duration still receiving the lion’s share of assets as investors continue to search for yield in a low-rate environment.

The relative calm on the performance front was contrasted by some notable news flow. On August 1, the city of San Bernardino filed for municipal bankruptcy after disclosing a $46 million budget shortfall, making it the third California city to seek court protection from creditors since June 28. California cities are confronting rising pension costs as they contend with growing unemployment and declining property- and sales-tax revenue. The costs stem from decisions made when stock markets were soaring and retirement funds were running surpluses. Several sources have speculated that the recent spate of bankruptcy filings is eroding the stigma of Chapter 9, making it a more palatable option for other municipalities. Of course, local bankruptcy is authorized in only 26 states and for many reasons — financial, political and social — is most often not an appealing option for municipalities.

The Securities and Exchange Commission’s (SEC’s) long-awaited report on the municipal market was issued on July 31 and asks Congress to give it authority to set disclosure standards for muni issuers and to provide the tools to enforce those standards. As expected, the SEC is not seeking repeal of the Tower Amendment (which allows issuers to offer municipal securities without filing documents with regulators) or wholesale removal of the exemptions for munis in the federal securities laws.

Finally, the New York State Department of Financial Services licensed a new bond insurer — Build America Mutual Assurance Co. (BAM) — making it the first mutual bond insurer serving the US municipal bond market. As a mutual insurer, the company’s insured issuers will also be its owners. BAM is authorized to wrap bonds in 26 states and was awarded an AA rating with a stable outlook from Standard & Poor’s. It will insure only investment-grade revenue and general obligation (GO) bonds issued to fund essential government facilities and services. 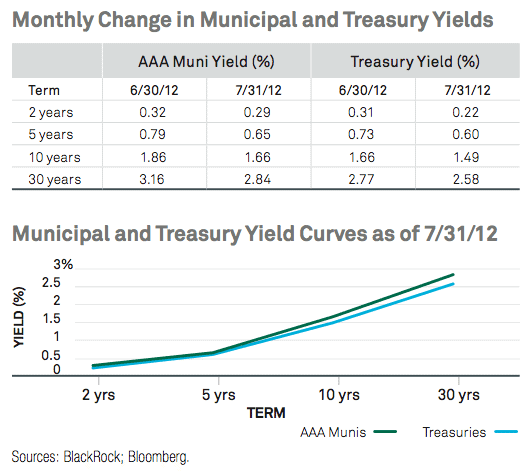 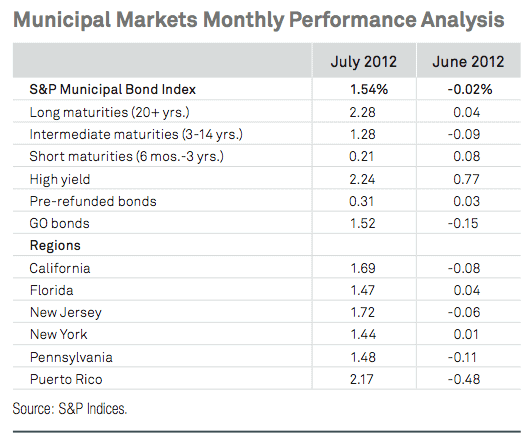 The S&P Municipal Bond Index returned 1.54% for the month and 5.75% year-to-date. Returns were positive across the curve in July, with the greatest strength on the long end. Credit spreads (high yield vs. GO) tightened 8 basis points (bps) on the month. The high yield sector outperformed the broader market by 70 bps in July and 664 bps year-to-date. As for sectors, the water and sewer index provided the best performance, outpacing the main index by 27 bps, while the housing index underperformed by 64 bps.

We maintain a long duration stance, fully cognizant of the low- rate environment and tight spreads. New issues continue to present opportunity to enter the market at attractive levels, particularly relative to the secondary market. We expect munis to continue taking cues from the Treasury market, but with more muted volatility. In an environment of low absolute rates, performance is likely to be driven by yield curve positioning, trading the maturity ranges, capitalizing on supply/demand imbalances and security selection.