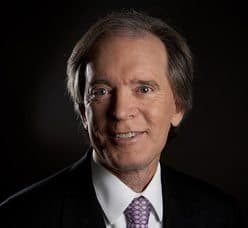 PIMCO’s Bill Gross said last week that growth following the financial crisis, is entering a new phase. Where economic growth will be converging toward lower, yet more stable top speeds and interest rates will remain below their pre-crisis equilibrium.

Gross warned bond investors that they’re in for some pretty paltry returns over the next half decade. So how exactly are you supposed to invest in such an environment?

Fortunately, Gross has a couple of ideas. So when a multi-billionaire fund manager has investing ideas, we always like to listen. Even if, in the past, some of those ideas haven’t exactly panned out.

In an interview with Barron’s Michael Aneiro, Gross said that there are some bond investments that he thinks will fare better than others.

First off, Gross says, investors need to use a little leverage to boost returns. On that front, he likes closed-end funds as a way for individual investors to find some above-average yields.

“There are other closed end funds , not just from Pimco, but closed end muni funds at discounts that yield 6% plus or minus,” he says. “There’s the BlackRock Build America Bond [Trust] (BBN). There’s a lot of duration risk … but the BABs program comes with a 35% subsidy from the U.S. Treasury, and that’s a decent fact that most investors have forgotten about in recent years. So investors – if they buy closed-end funds at a discount and they’re aware of the potential leverage – can get better returns there.” Gross said.

He also likes the shorter-dated segment of the junk-bond market, this time staying on home turf for an exchange-traded fund recommendation.

“We still like short-term high-yield securities, between 1-4 years rather than say 4-10 years,” Gross says. “If we continue to see a stable economy, defaults are still in the distance. You can get a high yield ETF with short maturities – like the one Pimco offers, the Pimco 0-5 Year High Yield Corporate Bond Index ETF (HYS) – that yields about 4.3% and is mainly 2- and 3- and 4-year high-yield bonds.”

“There’s not much price risk there and still some juice there in terms of the yield. High yield [market valuation] looks extended, and it is extended, but if you stay short in the 3-year area you can be reasonably sure you get your money back and a decent return.”

Gross also likes non-agency mortgage bonds as one of his favorite market sectors right now. “Non- agency mortgage rates float, they’re Libor-plus types of vehicles, and they still tend to provide a 4%-5% yield with interest-rate protection because they float,” Gross says, adding that they do come with additional credit risk because many are backed by subprime loans.

Gross finished by saying that it’s going to be tough to make a case for major gains in any asset class over the next few years unless there’s a selloff first. “There’s no doubt that asset prices everywhere are artificial,” Gross said. “It would help investors in the long run if stocks sold off 15% or if [10-year Treasury] bond yields went to 3%.”

Income Investing: – Bank of America bullish on munis, sees rates falling further. – While some other banks are souring on municipal bonds, Bank of America Merrill Lynch‘s muni team maintains its bullish outlook on pretty much every aspect of the muni market, from underlying Treasury yields to comparable muni yields to municipal credit risk.

Investing.com: – What happened to the muni meltdown? – The last few weeks have seen a very decent drop in intermediate- and longer-term tax-free bond yields. This year’s stable muni market is very different from that of a year ago, when the great meltdown ensued from bond fund selling fomented by fears of Federal Reserve tapering of quantitative easing.

Bloomberg: – Morgan Stanley says it’s time to trim wagers on high-yield munis. – Investors should reduce holdings of riskier municipal-bond holdings after the strongest rally for speculative debt since 2009, according to Morgan Stanley.

LearnBonds: – Master Limited Partnerships. – A Master limited partnership (MLP) is a publicly traded entity that combines the tax benefits of a limited partnership with the liquidity of a publicly traded company. MLPs are listed on the major U.S. stock exchanges, but because they are partnerships, MLPs do not have to pay corporate taxes at the state or federal level. To qualify for MLP status, a partnership must derive 90% of its cash flows from activities related to real estate, natural resources and commodities.

Market Realist: – Must-know: Why did bond yields drop last week across maturities? – Against market expectations, yields across the curve dropped considerably last week, leading to a rally in bond market prices that benefitted all major bond ETFs. So whats happening?

Wall St Cheat Sheet: – Is there still room to run in Treasury bonds? – With the rise we have seen in bonds so far this year, we have seen some analysts come out with bullish remarks on the Treasury market, but still, the prevailing viewpoint is that rates are going to rise going forward. Furthermore, this viewpoint is presented as axiomatic. Consider, for example, this article from Fidelity. The language implies that interest rates must rise.

WSJ: – AT&T could dial up $7.5 billion bond sale for DirecTV deal. – Add another name to the list of mammoth corporate-bond sales: AT&T Inc. could sell as much as $7.5 billion in new debt to help pay for its $49 billion acquisition of DirecTV, analysts say, which would rank as the fifth largest high-grade corporate-bond sale in the U.S. this year.

MarketWatch: – Why the next bond you own may be Apple or Google. – Tech companies like Apple Inc., Cisco Systems Inc., and Microsoft Corp. are increasingly jumping into the bond market, in many cases using low rates to help fund buybacks while avoiding tax penalties on using overseas cash.

WSJ: – Chasing yield, investors plow into riskier bonds. – Large investors are rushing into the riskiest corporate bonds, frustrated by low interest rates on safer investments and convinced that even companies with shaky finances are in little danger of default.

Bloomberg: – Mom and pop bet against hedge funds on junk-rated loans. – Mom-and-Pop investors have had it with junk-rated loans. Professional money managers, meanwhile, are still piling in and using borrowed money to buy them up.

The Future Tense: – The danger behind purchasing junk bonds at peak complacency. –  Is it worth running the risk that the economy could slow down just a tiny amount which would cause junk bond defaults to surge?

Morningstar: – How to make money in Emerging Markets. – Emerging markets are not compelling on a long term view – nor do the fundamentals stack up. But there are some fantastic growth opportunities for stock pickers.

Forbes: – Three big reasons to consolidate your 401(k) into an IRA. – If you’re leaving a company or retiring, what do you do with your 401(k)? You can, of course, cash it out or leave it with your former employer.

Bloomberg: – Income ideas for the yield-starved. – Ah, to be a rentier! Gone are the days when Vladimir Lenin could rail against these “parasitic” capitalists for “clipping coupons” from their bonds while doing no work at all. Nowadays, with 10-year Treasury notes yielding a mere 2.5 percent and junk bonds barely 5 percent, investors who want a decent stream of income have to scramble.

About.com: – Bond market update – May, 2014. – The market has a way of making fools of those who venture predictions, and that’s certainly the case when it comes to bonds in 2014. Late last year, there was a nearly universal consensus that the economy would rebound and bonds would perform poorly in 2014. In fact, the opposite has occurred.

WSJ: – When a portfolio holds 150 mutual funds. – The couple had been investing and saving for years, accumulating $4 million. However, they had been too busy with work and travel to manage their investments according to an organized strategy, and as a result had 18 different accounts that held 150 mutual-fund positions.

WSJ: – Worries of a bank-loan-ETF exodus mount. – Investors have been pulling money out of exchange-traded funds backed by bank loans, once again raising concerns about the ability of lightly traded financial markets to handle a big exodus from ETFs.

Hoisington: “the Fed has eviscerated the middle class” & no surprise he remains bullish on 30y USTs, fund w duration of 20 #icio

#Detroit requests that requirement city achieves A- rating b4 release from state oversight be removed from legislation. #muniland