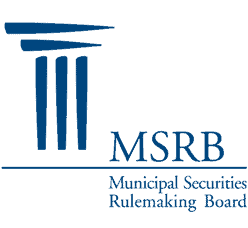 Long time muniland reporter Cate Long says. “This development is revolutionary for the municipal bond market. It will help non-dealer investors assess the fairness of prices they are being offered on a security. This will be the most significant step for municipal bond trading since the MSRB RTRS trade reporting system was established 10 years ago.”

As part of the program the MSRB has published a concept release about how it should design the new Central Transparency Platform (CTP), and asked for interested parties to put forward ideas for the platforms development.

Cate has very kindly shared her responses to some of the questions in the Concept Release on her Muniland blog.

Philly.com: – Note of caution on Puerto Rico muni bonds. – Attention, municipal bond investors. You may love tax-free bonds, but Cumberland Advisors, of Vineland, N.J., is veering away from the troubled muni bonds of Puerto Rico – even though some in the hedge-fund community are embracing this high-risk trade.

Reuters: – Drop in refi deals dents October muni bond supply vs year ago. – Municipal bond issuance fell more than 25 percent in October from a year earlier as higher interest rates in the second half of the year have led to a decline in refinancing deals, preliminary monthly data from Thomson Reuters showed on Thursday.

BusinessWeek: – Billionaire touts hospital bond driven by Obamacare. – Voters in Florida’s most-populous county will decide next week whether to pay higher taxes and sell a record $830 million of debt for their flagship public hospital to help it prepare for Obamacare.

Yahoo Finance: – These types of bonds are making money. – The headlines for some municipal bonds are negative. But, according to one strategist, the bad press could make muni bonds a buying opportunity.

MarketWatch: – Puerto Rico muni bonds get some tailwind. – Puerto Rico municipal bond prices have been falling at a startling pace this year, sent skidding by investors jittery over the U.S. territory’s financial straits and a weak market environment. But signs are emerging that the island’s tax-exempt bonds may have reached the bottom.

Learn Bonds: – Sympathy for the Fed Chairman. – The Fed was not shy about placing part of the blame for the sluggish economy at the feet of elected officials. The FOMC statement read:  “Fiscal policy is restraining economic growth.” Many market participants and pundits took this as a reference to the partial government shutdown and debt ceiling debate. We believe that the Fed’s blaming of fiscal policy goes far beyond October’s developments.

Yahoo Finance: – Here’s why ‘The Street is all wrong’ about bonds. – The bond market has been especially volatile and tortured lately given the Fed’s head-fake on tapering in September, followed by the government shutdown and debt ceiling standoff that ate up most of October. But at least one market watcher thinks the trend in fixed income has gone too far, and gotten way too negative.

WSJ: – Treasury bonds fall amid Fed anxiety. – Prices of Treasury bonds fell for a third-straight session due to concerns that the Federal Reserve might start cutting back its bond-buying program earlier than many investors thought.

HighYeildBond.com: – Retail cash inflows to high yield funds continue to see huge ETF influence. – Retail cash inflows to high-yield funds contracted to $753 million for the week ended Oct. 30, from $2 billion last week, and ETFs again were a huge influence, at 67% of the total, versus 72% last week, according to Lipper, a division of Thomson Reuters.

Pension Funds Insider: – Catastrophe bonds try to break new ground in pensions despite rift of opinion. – Pension funds can reap rewards from record issuance of catastrophe bonds, claims a new Clear Path Analysis study. The research group states that a record $2bn of the bonds, which are a form of reinsurance against natural disasters, were issued in the first quarter of 2012.

BusinessWeek: – A bond whiz teams with a nobel winner who warns about bubbles. – Jeffrey Gundlach, the unabashedly bombastic bond manager whose DoubleLine Capital is one of the fastest-growing mutual fund startups in history, is joining with Yale finance professor Robert Shiller to launch the DoubleLine Shiller Enhanced CAPE Fund. The offering  marries Gundlach’s active fixed-income management style with a stock strategy based on Shiller’s value investing guidelines.

Morningstar: – Once again on top. – PIMCO’s Enhanced Short Maturity ETF has taken the top spot in the ranks of active ETFs from its sibling, PIMCO Total Return ETF, as investors have looked to reduce interest-rate risk.

InvestmentNews: – Mutual funds rebound after late-summer slide. – Bond and equity mutual funds combined received $13.54 billion for the week ended Oct. 23, according to estimates from the Investment Company Institute. The week before, the funds sustained $1.9 billion in outflows.

InvestmentNews: – Calvert launches diversified green-bond fund. – Calvert Investments on Thursday launched the Calvert Green Bond Fund (CGAFX), packaging as a mutual fund a strategy the company has been managing as a separate account for more than two years.

ETF Trends: – Convert to convertibles…bonds that is. – Imagine a bond exchange traded fund that better-than-average potential for capital appreciation relative to most bond funds that throws off a decent yield while not being too sensitive to interest rate fluctuations.

Empiritrage: – Predictability in bond ETF returns. – Highlights that bond ETF premiums and discounts are persistent, and develops a trading strategy to take advantage of this persistence.

Kiesel: Continue to ‘go for growth’ in your investments. Where are their opportunities? Macau! Gaming revenues up +32% y/y in Oct.

Potential muni bond volume for next week should total $5.77B, from $5.06B this week, per Ipreo, The Bond Buyer and Thomson Reuters.