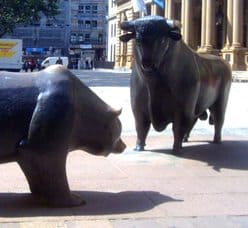 One of the biggest stories in fixed income markets during 2014 was Bill Gross’ abrupt departure from Pimco. Investors pulled $1.2 billion from his Pimco Total Return ETF (BOND) following Gross’ departure.

But Gross won’t be out of the market for long, with Janus’s CEO saying the company is looking to put “Gross’ excellence” into an ETF at some point.

Back in October Janus Capital Group Inc purchased VS Holdings, the Darien, CT-based parent of VelocityShares. This could enable Gross to build an ETF to compete for retail customers, culling the loyalty of countless financial advisors who he worked with during the bond heyday, the longest downtrend in yields and uptrend in bond prices in history.

If Gross does launch an ETF that would put him in direct competition with another bond maverick. Jeffrey Gundlach of DoubleLine, who also plans an ETF. Gundlach has teamed up with State Street and filed to launch the SPDR DoubleLine Total Return Tactical ETF.

While there’s no guarantee either ETF will launch in 2015, the chances look pretty good. And if they do we can look forward to a battle royale.

Learn Bonds: – Investing in 2015 – 5 important financial themes to follow. – The next twelve months should prove rather critical from both a market valuation and monetary policy viewpoint. Here are 5 major themes for both stock and bond investors to monitor that will have an impact on portfolios in the year ahead.

WSJ: – SEC tightens policing of municipal debt market. – (Subscription) U.S. securities regulators, ratcheting up their policing of the $3.7 trillion market for state and local debt, are seeking to ban local officials from the market for their involvement in alleged fraud.

Bloomberg: – Meredith Whitney’s hedge fund said to be in turmoil. – The hedge fund Meredith Whitney started last year after she became one of Wall Street’s best-known analysts is in turmoil. Her biggest investor demanded his money back and two executives left in the past month, according to a person with knowledge of her firm.

Zacks: – Can the rally in Treasury bond ETFs continue? – The strength in the Treasury bond markets has surprised many analysts. At the end of last year, many were expecting that interest rates will go up in 2014 as the economic growth picks up and Fed moves towards raising interest rates.

Deal Book: – Bond issues from Russia and Ecuador serve as cautionary tales for junk-rated debt. – If David Letterman did a top 10 list for dubious bond investments, a case might be made for including two fast imploding issues from Ecuador and Russia.

Investing.com: – Junk Bonds: Bullish wicks form after rare performance spread. – If one likes the idea of buying low and selling higher, junk bonds might come to mind due to how hard they’ve been hit of late!

ValueWalk: – Howard Marks is getting aggressive on high yield debt. – Oaktree Capital Group LLC Capital Management co-founder Howard Marks says that investors should see the drop in oil prices as more proof that markets are irrational and macro forecasting all but impossible. Instead of trying to Guess, which way prices will go from here, he’s looking for the securities (high yield debt in particular) that are getting unfairly pummeled by investors heading for the door.

Wolf Street: – So-called ‘dumb money’ flees junk debt. The market quakes. – Investors have started to vote with their feet. All kinds of institutional investors hold junk bonds, but retail investors – the “dumb money” – hold them in their bond mutual funds or ETFs, often unaware that their bond fund is goosing its yield with junk. And until June, junk bonds were a great deal.

Bloomberg: – Junk bond traders’ hiring by Deutsche Bank shows need for humans. – Machines are having a hard time infiltrating junk-bond trading like they have the Treasury market. That means banks have to keep teams of human traders to remain relevant in this lucrative market.

Benzinga: – Emerging market bond, oil and healthcare ETFs to watch this week. – After having recovered nearly all the losses of the most recent dip, stocks are now poised to make additional gains during the historically strong Christmas holiday week. The SPDR S&P 500 ETF is within close proximity of new all-time highs and the specter of a Santa Claus rally may once again send it to uncharted territory.

Financial Post: – 6 issues that will affect your fund investments in 2015. – The year has been full of surprises for investors, not the least of which is that oil prices have cratered of late, causing the Russian ruble to disintegrate, and that country’s central bank to resort to desperate and, to this point, unsuccessful measures to rescue the currency.

Market Realist: – Know More: Bond ETFs versus equity ETFs. – Stock ETFs (Exchange Traded Funds) and bond ETFs actually have quite a few things in common.  Both vehicles typically track an index, both trade on an equity exchange, and both give investors exposure to a diversified portfolio of securities in one trade.  However, because stocks and bonds trade very differently, it stands to reason that stock and bond ETFs would differ as well.  In particular, it’s helpful to keep the following things in mind.

Economic Musings: – Stocks & bonds fall – My 2015 outlook. – Regardless of why your thesis has or hasn’t worked out, we’re sitting at the end of 2014 with 30y yields under 3% and the S&P nearing 2,100. The market seemingly believes there’s no ceiling for stocks, and it’s becoming more & more accepting of low long term treasury yields. The question is what will happen going forward – so here’s some of my thoughts.

WSJ: – Stocks are from ‘patient’ Venus, bonds are from ‘data dependent’ Mars. – If the Federal Reserve is being “patient” and at the same time is “data dependent,” what exactly does that mean? The stock market last week gave its vote, emphatically. By rallying 700 points in two days, the equities boys were saying: “patient” means no hikes soon, at least for the next six months.

Bloomberg: – The $6.3 trillion bidding frenzy that vanquished bond bears. – When it comes to the ability of the U.S. government to finance itself in the bond market, this year will go down as as one of the best on record — and dealers say 2015 will be no different.

Financial Post: – ‘Bill Gross is our Peyton Manning’: Janus Capital counts on bond giant to turn firm around. – When Bill Gross quit bond giant Pacific Investment Management Co. three months ago, almost as stunning as his departure was his choice of employer: Janus Capital Group Inc., a struggling stock fund manager whose assets had shrunk by half from a peak 14 years earlier.

Investing.com: – 3 strategic ETFs for retired investors. – Investors managing their money through retirement often have different needs than during their growth and accumulation years. Often times they are more focused on income and capital preservation rather than taking the risk of seeing their hard earned capital evaporate. With that goal in mind, building out a diversified portfolio using both core and strategic positions can enhance your dividend yield and provide a strong base for steady returns.

FT: – U.S. regulator probes ETF pricing structures. – Extreme movements in the prices of bonds, commodities and other assets have prompted regulators at the Federal Reserve Bank of New York to take a closer look at the inner workings of exchange traded funds.

MarketWatch: – 11 ETFs that could make your new year. – Looking for bold investing ideas for 2015? Or perhaps you’re just searching for diversified, high-quality and low-cost index funds. Here are a few picks that run the gamut. MarketWatch asked several investing experts each to recommend 3 ETFs for 2015 — funds that ought to perform well, or that are at least worth watching.

Market Realist: – Tracking Bond ETFs. – Bonds trade over-the-counter (or OTC) where their prices are negotiated privately between buyers and sellers.  It can be hard for an investor to find the bonds that they want to buy, and it can be difficult to get a price on bonds they want to sell. It also can be difficult to find information on where bonds are trading in order to get a sense of what a fair buy or sell price should be.

US Banks, Life Insurance, and Mutual Fund holdings of municipal bonds have increased over the past five years pic.twitter.com/DKdK1MjTSp