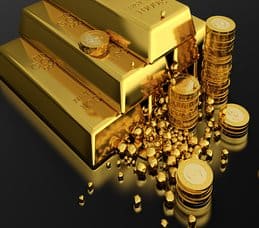 In my recent article, “Why Aren’t Gold Bonds Plunging Along With The Stocks?” I mentioned two long-term bonds that have been on my radar screen for quite some time.  For readers who are intrigued by those Barrick Gold and Kinross Gold corporate bonds, I would like to provide a closer look at the terms of the notes.

On April 20, 2012, Barrick Gold filed Form F-10 with the Securities and Exchange Commission, registering its 5.25% coupon, 2042 maturing notes under the Securities Act of 1933.  The registration statement included a preliminary short form prospectus detailing the $750 million of April 1, 2042 maturing senior unsecured notes.  At this time, the notes are rated Baa2/BBB+ by Moody’s and S&P respectively.

Barrick Gold is the world’s largest gold mining company as well as a notable producer of copper.  According to its presentation at the February 25, 2013, “BMO 22nd Global Metals and Mining Conference,” 47% of Barrick’s 2012 production came from North America, 25% from Australia and the Pacific region, 22% from South America, and 6% from Africa.  In terms of proven and probable reserves, in 2012, 42% were in North America, 37% in South America, 12% in Australia and the Pacific region, and 9% in Africa.

The 5.25% coupon, April 1, 2042 maturing, Barrick Gold notes, CUSIP 067901AH1, pay interest semiannually and include both call and put features.  First, there is a make whole call at the “Treasury Rate” plus 30 basis points.  The “Treasury Rate” is defined as follows:

There is also a conditional call at par (plus accrued and unpaid interest) associated with the notes.  In the prospectus, there is lengthy language detailing this “Tax Redemption” that reads as follows:

Another piece of important information is that the 2042 notes are not guaranteed by Barrick Gold’s subsidiaries.  They are, instead, exclusively the obligation of Barrick Gold itself.  This, according to the prospectus, means the notes are effectively “subordinated to all existing and future liabilities” of the subsidiaries.”  Furthermore, “In the event of an insolvency, liquidation or other reorganization of any such subsidiaries, Barrick’s creditors will have no right to proceed against the assets of such subsidiaries.”

Additionally, if you are curious about covenants related to limitation on liens as well as consolidation, amalgamation, and mergers, the aforementioned preliminary prospectus provides further details.

Kinross Gold is a gold-focused mining company with operations centered in four parts of the world: North America, South America, western Africa, and eastern Russia.  Its September 1, 2041 maturing, 6.875% coupon senior unsecured notes, CUSIP 496902AK3, pay interest semiannually and are currently rated Baa3/BBB- by Moody’s and S&P respectively.  There are only $250 million of the notes outstanding, and while they pretty consistently have offers available on the secondary market, actual trading in the notes is sporadic.  At the time this article was written, the notes were being offered for 104.917 cents on the dollar, a yield-to-par-call of 6.49%.

As with the previously described Barrick Gold notes, you should be aware of various features associated with the Kinross Gold notes.  The preliminary short form prospectus can be found here.

First, the Kinross Gold 2041 maturing notes do have a subsidiary guarantee for all subsidiaries that take part in the company’s Credit Agreement.  According to the prospectus, “Credit Agreement” means “the Fourth Amended and Restated Credit Agreement, dated as of March 31, 2011, among Kinross Gold Corporation, Kinross Gold U.S.A., Inc., Round Mountain Gold Corporation and Kinross Brasil Minercaçao S.A., the lending institutions named therein and The Bank of Nova Scotia, as administrative agent, as amended, extended, renewed, restated, supplemented, refunded, replaced or otherwise modified from time to time by one or more credit facilities, and any agreement entered into in substitution therefor.”

Furthermore, there is a make whole call at the “Treasury Rate” plus 50 basis points.  The make whole call expires on the last day of February 2041.  On or after March 1, 2041, the notes can be called at par.  There is also a change of control repurchase event tied to the Kinross Gold notes.  Should a change of control repurchase event occur, the repurchase price will be 101 cents on the dollar.  Moreover, as with the Barrick Gold notes, there is a conditional call referred to as a “Tax Redemption.”  If called under the terms of the “Tax Redemption,” the call price is 100 cents on the dollar.  In general, the terms of the two “Tax Redemptions” are similar in nature.  But I would still recommend reading the language in the Kinross Gold prospectus, as the wording is different from that in Barrick Gold’s prospectus.

Before purchasing either of the notes detailed in this article, please remember to do your own due diligence on the financial profiles of Barrick Gold and Kinross Gold.  Only you can determine if taking the counterparty risk of buying individual bonds is right for you.  Additionally, only you can determine if taking the duration risk of buying long-term bonds is suitable for your portfolio.  Finally, please review the prospectus of both notes, as there may be additional details important to you that were not mentioned in this article.