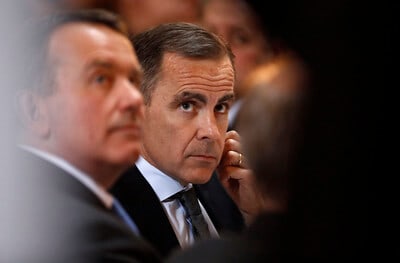 Economists say the decision by the Bank of England to cut interest rates this week sits on a ‘knife-edge’.

Mixed economic data will strengthen the arguments of hawks on the Bank’s nine-strong Monetary Policy Committee (MPC) when they meet on Thursday, with financial markets pricing in a 60 per cent chance of a reduction.

A cut from the UK’s rate’s current 0.75 per cent to 0.5 per cent, would see the country’s headline borrowing rate fall to a two-year low.

Mark Gregory, UK chief economist at Ernst & Young, said: “The decision looks to be on a knife-edge and is very hard to call.”

This key rate affects the cost of personal loans, credit card rates in the UK, as well as the price of loans and bonds to large corporations and small firms.

At the last meeting in November, the MPC voted 7-2 in favour of keeping rates at 0.75 per cent, meaning that only three votes need to swing to drive through a cut.

Investec chief economist Philip Shaw said the decision was “the least predictable for some time”.

A rate reduction would hurt long-suffering savers who struggle to find low-risk saving accounts able to beat the current level of inflation at 1.3 per cent, but would be a boost to borrowers slashing the cost of mortgages even further.

This was followed by data showing inflation tumbling to a three-year low of 1.3 per cent in December.

Bank of England governor Mark Carney (pictured, centre), said that interest rates might be cut if economic performance remains weak. And both external MPC members Gertjan Vlieghe and Silvana Tenreyro have hinted that they could vote for a cut if data doesn’t show an improvement in the economy since December’s election.

But more recently, the UK’s unemployment rate remains at mid-1970s lows, while the preliminary reading for purchasing managers index showed Britain’s private sector returned to growth for the first time in five months in January.

Economists at Bank of America said they now expect the MPC to cut rates this week having previously thought the Bank would wait until May.

But ING developed markets economist James Smith forecasts rates will be held on Thursday, with a maximum of four MPC members voting for a cut.

“It’s a close call, but a recent post-election pick up in sentiment should be enough to see the Bank of England avoid cutting interest rates this month,” he added.