AstraZeneca stock falls after $96bn approach to US rival Gilead 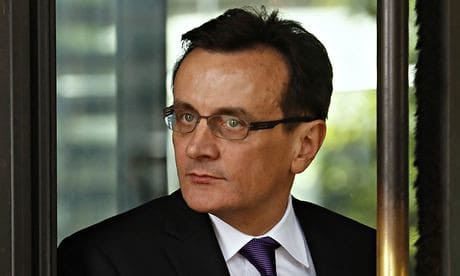 Stock in UK drugmaker AstraZeneca is almost 2.5% on Monday following a weekend report of a possible $96bn merger with US rival Gilead in what would be the world’s largest healthcare deal.

California-based Gilead has discussed the idea with its advisers, but no decision has been made on how to proceed and the companies are not in formal talks.

Gilead came to the notice of investors this year because of its coronavirus treatment, remdesivir, which is currently working its way through clinical trials and has received emergency US approval for use for patients with the disease. Its stock has grown by 19% this year and is worth $96bn based on Friday’s close.

AstraZeneca, valued at $140bn, is the UK’s biggest drugmaker by market capitalization and has developed treatments for a range of conditions from cancer to cardiovascular disease.

Gilead’s management prefers to focus on partnerships with other drug firms and smaller acquisitions, according to the report, rather than a sale.

A representative for Gilead declined to comment. A spokesman for AstraZeneca said the company doesn’t comment on “rumours or speculation.”

If a deal goes ahead, it will surpass Bristol-Myers Squibb Co.’s $74bn takeover of Celgene last year as the biggest-ever healthcare acquisition, according to data compiled by Bloomberg. It would also rank among the 10 biggest M&A deals of all time.

AstraZeneca and Gilead both working on coronavirus vaccines

However, Gilead’s stock is still more than a third lower than its 2015 highs, as the firm attempts to boost its drug development pipeline. The business, run by chief executive Daniel O’Day, has seen a steady decline in sales from its hepatitis C franchise.

Although investment bank SVB Leerink recently forecast that Gilead’s sales of remdesivir may hit $7.7bn in 2022.

AstraZeneca is also helping to manufacture a Covid vaccine developed at the University of Oxford.

AstraZeneca boss Soriot has boosted the fortunes the firm since taking the helm nearly eight years ago, as it struggled to replace an ageing stable of drugs.

He spearheaded the development of blockbuster treatment Lynparza, which was initially approved for ovarian cancer but has also proved useful for treating other forms of the disease. AstraZeneca has since overtaken British rival GlaxoSmithKline in market value.

In 2014, AstraZeneca fought off a $117bn approach from rival Pfizer, a deal that attracted attention from US lawmakers as it would have allowed New York-based Pfizer to lower its tax bill by redomiciling in the UK.