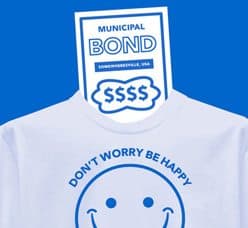 So is it true, do muni bonds represent unprecedented risk right now? Probably not. There is nothing new in this article, many of the problems it talks about are well documented. Including the current state of Puerto Rico and the possible reduction of municipal bond tax exemption.

Whilst it’s true that the municipal bond sell-off in June was the biggest in 20 years, amounting to about 2.2% of the $680.7 billion managed by municipal bond mutual funds. It was part of a much larger bond sell-off caused by the Fed threatening to reduce its quantitative easing program and not specific to the muni market.

Yes munis have come in for a tough year, there has been no end to problems hitting the headlines. No one is denying that Detroits bankruptcy was anything other than bad news, for both Detroit and the municipal market as a whole.

But the fact is, the vast majority of the municipal bond market is in great shape. Defaults are headline making but thankfully rare, bankruptcies are even rarer and they seldom come out of the blue. You can guarantee, that if a state is in trouble, most fund managers will already know about it.

So is the muni market about to blow up? I doubt it, it will still be here, long after the likes of Meredith Whitney have been put out to grass.

Income Investing: – Jefferson county forced to raise yields to sell bonds. – Somewhat predictably, Jefferson County, Alabama’s $1.8 billion muni bond sale didn’t go as smoothly as it might have hoped. After originally offering 40-year uninsured bonds at a 6.5% yield, the bankrupt county had to boost that yield to 6.7% to drum up enough investor interest. But it did sell the bonds, marking the first time a municipal issuer still in bankruptcy was able to complete a public debt offering.

Learn Bonds: – Kicking the bond fund habit. – The decision to start buying individual bonds and move away from bond funds may be a difficult strategic move for many investors. While there may be familiarity with individual fixed income products, an initial purchase may prove a somewhat intimidating experience. In this article, we will take up some of the motivation for weaning off funds. Further, we will take up some important considerations as one sifts through the bond universe prior to actually making an investment.

SFGate: – Treasury 10-year yield rise from one-week low on Fed speculation. – Treasuries fell, pushing the yield on the benchmark 10-year note up from a one-week low, before a speech by Federal Reserve Chairman Ben S. Bernanke that may help gauge the outlook for monetary stimulus.

InvestorPlace: – TLT Options – Bye bye, bonds! – After an ever-so-brief rally, it appears bond prices are once again losing their battle with gravity. Concerns over an eventual tapering of the Fed’s bond purchases — along with the ongoing realization that interest rates are headed higher — have returned to haunt the dreams of bond bulls yet again.

Income Investing: – TIPS are still expensive, keep avoiding them. – Inflation continues to be a no-show this year, and Treasury Inflation-Protected Securities continue to get no love from much of the investment community. The latest anti-TIPS tips come from Russ Koesterich, BlackRock‘s global chief investment strategist, who says inflation remains “virtually nonexistent,” thanks to low wage growth, excess capacity and slow credit growth, and that he doesn’t expect a notable increase for “at least the next year or so.”

Barrons: – Yahoo! Rising: Sets $5B in buybacks, to issue $1B in converts. – Upward of $200 million of the bonds may be used to purchase shares from holders in a private transaction, the company said, while the rest is expected to be used for general corporate purposes.

Income Investing: – As stocks soar, junk bonds hamstrung by wide spreads. – Junk bonds tend to have a lot in common with equities, and both have had good years in 2013. But for junk bonds it’s really only been a good year in a comparative sense: they’re up 6.35% on average in a year when the Barclays Aggregate index is down 1.27%. Meanwhile the Dow is up 19% and the S&P is up 22.5%. So really it’s not even a contest.

Morgan Myrmo: – Finding high yield in the foreign oil majors. – When it comes to providing the world with energy, there are a handful of extremely large companies that dominate the global market. These companies, known as the oil majors, are involved with exploration, production and distribution of oil, as well as other resources to a smaller extent.

Pensions and Investments: – The case for emerging markets revisited. – Since the beginning of May, global fixed-income markets have sold off aggressively. The 10-year Treasury yields have increased almost 100 basis points, triggered by concerns that an improving U.S. economy would cause the Fed to gradually raise interest rates. The immediate consequence of this shift in market perception has been a sharp sell-off across global fixed-income markets.

Business Life: – The perfect storm. – The benefits of investing in catastrophe bonds. They not only provide an alternative investment class, but they can ensure the survival of insurance firms so that disasters are covered.

Bloomberg: – The yield curve may indicate gains for bond investors. – There were two notes this morning from bond strategists wrestling with the difference between short- and long-term bond yields. With the Janet Yellen’s talk of the Fed anchoring near-term yields through continued policy accommodation, and inflation still virtually non-existent, each wonders how 10-year yields can be so much higher than 2-year yields.

ETF Trends: – ETF Chart of the Day: Mortgage Bond Bonanza. – We have seen some selling pressure in the “benchmark” ETF name that tracks the Mortgage Backed Securities market, MBB (iShares Barclays MBS Fixed Rate Bond, Expense Ratio 0.31%) as the fund has seen about $150 million flow out via redemption activity.

TheStreet: – Beyond bonds: Buyer beware. – As we exit the low interest rate era and return to rising rates, bonds and other fixed income instruments will come under selling pressure. This means in 2014 investors will be hunting for bond replacements in order to help safeguard their portfolio without having to account for falling bond prices and volatility.

Nothing really new in #FOMC minutes but taper nerves very evident in longer-term bonds. 30-yr Treasury yield back at summer peaks at 3.90%.