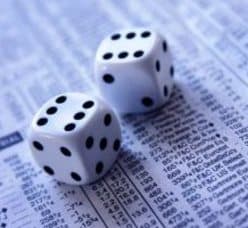 In a desperate search for yield many investors have entered the riskier end of the bond spectrum and increased the level of high yield bonds in their portfolios.

On the face of it the case for junk bonds seems sound, any rise in interest rates will be offset by lower default risk as the economy improves. That was the case the last time junk bonds outperformed higher-quality debt. As James Mackintosh says in today’s Financial Times.

“In the five years to the 2007 peak, investors made more than 14 per cent a year, including coupons. The S&P 500 averaged only 15 per cent, with wild swings along the way.”

Of course the same thing could happen again, but this time junk bonds offer a much smaller margin of safety.

James Mackintosh FT – “At the start of 2003, junk traded at a yield of 9 percentage points above Treasuries. Today, the differential is slightly more than 5 points.”

So junk bonds are not as safe this time around as they were back in 2007. There’s nothing wrong with investing in junk bonds, just make sure they don’t make up the bulk of your portfolio and be aware that junk bonds pay higher yields because you’re taking on more risk.

Felix Salmon: – How bond fund investors will act in an era of rising interest rates. – All the bond funds have seen a bit of a dip in recent weeks, but it’s the kind of move they’ve seen many times in the past, and it’s not the kind of move which is likely to cause an individual investor to panic. The main thing you learn from looking at this chart, indeed, is not that we’re in the midst of a historic bond-market selloff, but rather just that bond funds in general are pretty good at doing what they’re meant to do — which is to broadly retain their value over time, and with any luck go up over the long term, with reasonably low volatility.

ETF Trends: – Retail investors dumping EM bond funds faster than pros. – Tens of billions of dollars have been pulled from emerging markets bond and equity funds this year, but the outflows from bond funds haven massive since the start of June. That would be just after tapering of quantitative easing became an everyday topic of discussion.

Learn Bonds: – The minimum wage – Interesting observations to consider. – As a bond investor, I take great interest in discussions surrounding wage growth.  Wage growth is one mechanism through which more money can end up in the hands of the consumer.  And more money available for purchasing goods and services could cause upward pressure on prices, something bond investors should pay close attention to.

Bernardi Securities: – Separate account, laddered portfolios vs. municipal bond funds. – Almost universally, our client’s separate account, laddered portfolios handled last quarter’s turmoil much better than the broader bond market. This is a similar storyline to what our clients’ portfolios experienced during the 2008-2009 financial crises. These portfolios avoided much of the damage resulting from the panicked selling of many bond funds, bond ETFs and hedge funds.

ETF Trends: – How new financial regulation could impact bond ETFs. – The exchange traded product business has grown by leaps and bounds over the past several years with the number of ETFs and ETNs trading in the U.S. rising to around 1,500 with about $1.5 trillion in assets under management. On a global basis, the totals are 3,660 funds with over $2.1 trillion in AUM, according to new research published by Credit Suisse.

What Investment: – BlackRock chief says bonds still have plenty to offer private investors. – Investors can still find value in bonds if they shift the emphasis of their portfolio, according to Larry Fink, chief executive of BlackRock.

Bloomberg: – Bond funds lose $30.3 billion in August in big ‘shift’. – U.S.-registered bond mutual and exchange-traded funds lost $30.3 billion to investor redemptions this month, putting them on track for their slowest year since 2004.

MarketOracle: – Dangerous myths about rising U.S. Treasury bond yields. – The consensus is that yields began to rise on or around May 22, also known as Bernanke Day. That was the day when U.S. Federal Reserve Chairman Ben Bernanke seemed to hint at tapering the Fed’s $85-billion-per-month bond-buying program. In reality, the rise in U.S. Treasury note rates actually began a year ago, back in mid-2012 – when yields on the 10-year note and 30-year bond stood at all-time record lows.

WSJ: – Investors yank money from bond funds. – Investors have yanked $30.3 billion from U.S.-listed bond mutual funds and exchange-traded funds this month, marking the third-largest monthly outflow in records going back to 1984, according to estimates by TrimTabs Investment Research.

FundWeb: – Time for new strategies with your bond exposure?  – The volatility that struck global fixed income markets in May and June should prompt investors to consider strategies that will reduce risk coming from their bond exposure, investment experts argue.

ETF Trends: – Muni ETF trading at discount as investors fret rates, Detroit. – The iShares National AMT-Free Muni Bond ETF (NYSEArca: MUB) has been trading at a discount to its underlying holdings for a record-long period as muni investors continue to worry about the potential impact of rising interest rates and fallout from Detroit’s recent bankruptcy filing.

The Street: – Why junk bonds shine amid the carnage in Treasuries. – Not all bonds are created equal. The appetite for below-investment-grade junk bonds remains robust. And the same goes for high-end corporate bonds. Here’s a spin through the good, the bad and the ugly in bond land.

John M. Mason: – More evidence that the rise in U.S. Treasury yields is connected to outflows of risk-averse money. – The recent movement in the yields of longer-term US Treasury issues has been due to a substantial flow of out of these Treasury securities into other, “riskier” debt elsewhere in the world, primarily in Europe.

Bond market almost always leads the Fed at turns. That is why forward guidance is meaningless and just confuses the young'uns.