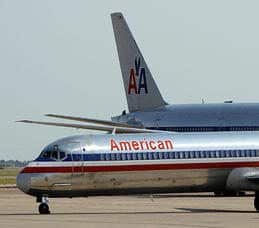 Municipal bondholders that purchased debt to finance airport expansions may become shareholders of the world’s largest airlines.  They have been caught in a drama involving two airlines, one bankrupt (American Airlines) and one not (US Airways). The story looks to have a happy ending for bondholders, with the bonds trading above their issue price in many cases.

Municipalities have the ability to grant private companies the ability to issue “municipal debt” or basically debt which pays interest that is free from federal, state and local income taxes. These types of bonds are called private activity bonds. The tax free nature of private activity bonds makes them attractive to investors, enabling the companies issuing them to pay a lower interest rate than a normal corporate bond.

As every company would want to issue these bonds, there is a strict national limit on the amount of private activity bonds that can be issued. Currently, the limit is slightly over $33 billion per year. Generally speaking, municipalities like to use private activity bonds as a lure for large scale development projects which will bring jobs to their community. Airport related construction projects are a popular use, as these projects bring immediate construction jobs, longer term service jobs, and can potentially make an area more attractive for businesses.

What happens when a private activity bond goes bust?

American Airlines Was a Major Issuer of Private Activity Bonds

American Airlines issued about $3.3 billion of municipal bonds, of which about $1.5 billion were unsecured. The unsecured bonds were used to finance projects at the Dallas-Fort Worth Airport, Newark Airport, Chicago’s O’hare and PR’s Luis Munoz Marin. In November 2011, American Airlines declared bankruptcy sending the market value of its unsecured private activity bonds into free fall. Some of the bonds, traded at a market value of 16 cents per $1 of face value.

Why was American Airlines different than past airline bankruptcies?

In the case of United and Delta, the companies went into bankruptcy requiring an immediate infusion of cash to keep the business going. Those providing financing obtained very favorable terms at the expense of existing bondholders.

More importantly, US Airways, the fifth largest US airline, desperately wanted to merge with American Airlines.  Merge might not be the right word as the creditors and shareholders of American Airways will end up owning 72% of the combined company. In the airline business, bigger does seem to mean better. Without being able to dramatically increase its size, many questioned the long-term viability of US Airways. The number of candidates which US Airways could combine with to increase its size were limited . The number of airlines that were a good fit based on limiting the overlap of travel routes was just one, American Airlines. While American Airlines was in bankruptcy, it was able to negotiate from a position of strength with US Airways.

One key to the deal for US Airways was not to create a new company that was suffocated under a huge debt load. As a result, the unsecured creditors of American Airlines instead of getting debt or a combination of debt and stock in the merged airlines, will receive preferred stock. The private activity bonds for American Airlines are now trading around their full face value.

American Airlines debt was the exception to the rule. Not all private activity bonds are issued by for-profit companies. Most of the ones that are issued by private companies are backed by specific assets instead of being unsecured. In bankruptcy, unsecured bondholders generally prefer receiving debt rather than stock. In the case of American Airlines, the offer on the table was just too good to pass up.

H/T – Many of the facts mentioned in this article are from Yvette Shields article, “Market Assigns Full Value To AMR’s Unsecured Bonds”