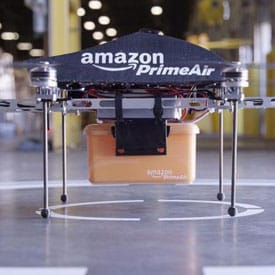 Amazon.com, Inc. (NASDAQ:AMZN) is getting creative with Prime Now Deliveries and is boarding the Subway to reach its customers. Reportedly, the online retail giant is beating the traffic blues in the city by using public transportation: the New York Subway.  The company has confirmed that most of its Prime Now deliveries are being loaded into pushcarts at the subway.  Amazon also reports that more and more delivery personnel are taking a walk or riding bikes to deliver smaller packages to its customers.

The move to utilize public transportation came after Amazon found it increasingly difficult to keep up its promise of delivery within an hour under its Prime Now model.  Prime Now commits delivery of mainly household items within an hour for $7.99 or for free if delivery time takes longer than two hours.

Such promises are bound to fail in large busy cities like Manhattan, where the streets are jam-packed, and it can take a very long time for taxis to cover a short distances.  Learning from the smart New Yorkers, Amazon has decided to get on board with the idea of riding the train.  The action underscores the future of logistics that online retailers might adopt in the future.

Unfortunately, based on the experiences of daily commuters, Amazon’s idea to ship Prime Now items via public transport may not improve its on-time delivery odds.  Amazon cannot overlook the probabilities that the subway system can become inefficient under certain circumstances.  Therefore, there is a constant need for the retailer to look and experiment, with other modes of transport.

Along these lines, the company is working on a ‘Drone delivery‘ system for shipping items to nearby customers, which seems promising and has gotten a lot of media attention of late.  With roads brimming with honking vehicles and distances getting farther apart, such innovative ideas may be one of  the only remaining options for retailers like Amazon, which has a lot of catching up to do if it hopes to become more competitive with offline retailers. The company has already secured an “experimental airworthiness” certificate, issued by the Federal Aviation Administration, which will give it an upper hand to test its new drone delivery concept.