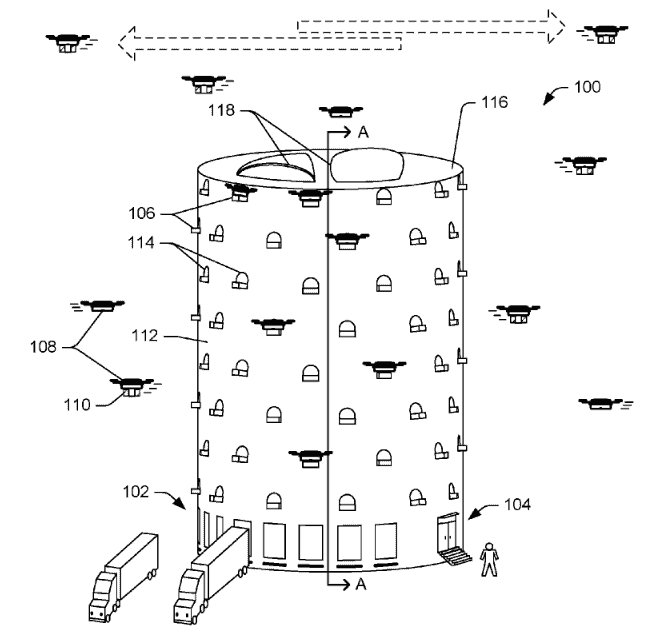 Amazon.com, Inc. may talk quite about about its drone technology, but it’s not like the firm is really close to rollout. 30 minute drone delivery is a very complex task, and there’s a lot of infrastructure needed to make it work.

The new patent, which was uncovered by Sam Shea over at BusinessInsider, looks a whole lot like a beehive to house the drones. That’s thematically consistent from Amazon at the very least.

The patent is for a “multi-level fulfillment center for unmanned aerial vehicles.” In short, it is a tower with entrances for multiple delivery drones. The firm has a myriad of designs in mind for its drone tower. One of them, which can be seen in the patent filing drawings, clearly takes its shape from a beehive.

The firm’s total process design for the center involves drones, people, trucks and elevators. The trucks bring the goods to the center, and load them into elevators. The goods are lifted to the right level and loaded onto the drones by human workers. Finally the drones go on their way to find customers. They return to the Amazon beehive and accept the next job.

As with most Amazon projects, the beehive seems to rely on a high level of automation to increase efficiency. That’s no surprise because it’s been part of the firm’s key progress in recent years as it transforms the entire retail industry. Drones may be far away, but it’s not to early to get excited about big ideas from the Seattle, Washington Amazon HQ.

Amazon.com, Inc. is building out its ideal drone-delivery world, at least conceptually. Ultimately, this is the groundwork for a project which may take years to finish. But because it could change retail forever, it’s important tot keep an eye on.

Importantly, logistics is the source of a good deal of Amazon.com, Inc. stock has growth in recent years. Between next day delivery and the firm’s other incredible abilities, efficiency drives demand. Why head to the store when Amazon will deliver a printer to my house this afternoon? Drone delivery is the next step on that road, but it’s likely a long way off.

Right now, Amazon shares are going to move a lot more based on the short and medium term. As a growth company, investors will be judging what kind of a base it has to propel growth over a multi-year period.

Shares in Amazon now stand at over $1000 each. The firm’s valuation rivals that of Google and Microsoft, and it’s in a strong position to grow into new markets. Logistics is going to be at the center of that growth, but don’t bet on Jeff Bezos’ firm because of the drones.

At the most, drones are an advertisement for Amazon. Whenever the firm gets them on the news it reminds people of the future Mr. Bezos offers. Obviously, that enough to make the project worth it to the firm. For those looking for effects on delivery times or margins, Prime Air is likely to be much more important over the next couple of years.