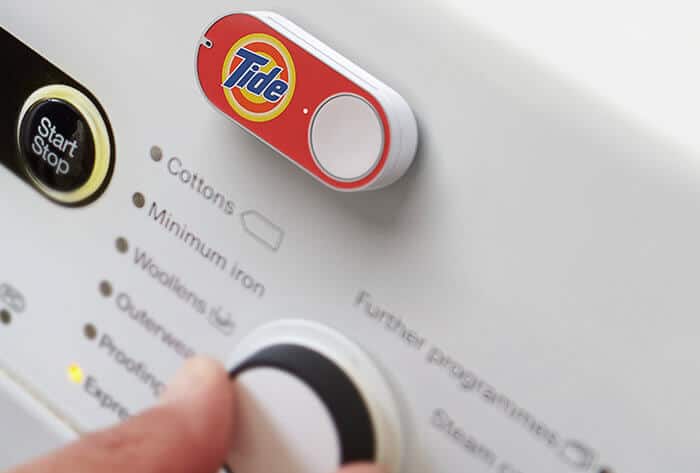 Amazon.com, Inc. steps up its IOT strategy one notch by offering Dash Replenishment Service (DRS) in the consumer product space. It has partnered with goods producers to automate reordering of home appliances.

“The real end state is where things just take care of themselves,” said Daniel Rausch, a director of product management for Dash services. “So Amazon wants to start providing that level of convenience for customers.”

Dashing Into The Internet Of Things

Dash Wand was launched last year in April, where the Amazon user would scan a bar code of the product in need, and it will get added to his Amazon Fresh account. Once the payment and delivery is confirmed, it will reach the user within the fixed period. It was put up on “per invite” basis. DRS, along with Dash Button, commenced earlier this year. Dash Button can be attached to any appliance and when pressed, it results in delivery request.

Before launching the Dash Kit, Amazon had introduced called “subscribe and save” feature. It offered discount to shoppers who set up an order time table.

Amazon has already partnered with GE, Whirlpool and Clorox. They are developing ‘smart’ products that can align with DRS for easy ordering. Recently, Amazon bought 2Lementary that owns a B2B platform to track and manage IP-enabled machines and devices.

“While much of the media has overlooked Amazon’s Dash program as being flash-in-the-pan technology, we note that this is the kind of simple advancement that can create a larger top-of-funnel for consumer engagement,” according to analysts. “We are increasingly optimistic on the future of automated ordering, which Amazon is beginning to enter with its Dash Replenishment Service. We believe this will be the next wave of ecommerce and that Amazon will dominate this segment.”

What About Amazon’s Competitors?

While Amazon is gradually moving into IOT space, other big tech giants are not far behind. Google’s Nest has already created an online platform which lets one appliance talk to another. It is run by the Nest Weave software. It has collaborated with leading brands such as LG, Philips and Whirlpool. Parse, acquired by Facebook in 2013, brought out Software Development Kits (SDKs) in third quarter this year. This allows the mobile apps to connect with each other and share common storage of data.

Apple is not far behind. iPhone and Siri serve the front end to engage customers. Apple TV and Time Capsule can turn into an IOT hub at home. Not to mention Apple Home Kit that connects all Apple devices. Apple’s iBeacon can transmit their location to Apple watches and phones. It can serve as a positioning system in large malls and shopping complexes. Then there is Apple’s CarPlay that turns your car ‘smarter’. With the series of new products in queue, Apple is ready to be at the forefront of IOT.

Analysts predict that the installed base of connected devices will rise from 10 billion today to as many as 30 billion by 2020. This will be propelled as technology advances, cost decline and awareness increase. Till that time!