Alphabet Inc  has spread its focus from its original search ads business to finding ways to extend human life, to using drones to deliver packages among other things. One of the most visible “bets” at the firm is its self-driving unit that has a fleet of 22 Lexus SUVs and 33 of prototype cars outfitted with LIDAR technology in order to navigate the roads without human input. Latest news reports indicate that Google wants to take its self-driving cars to the ultimate driving challenge as tests begin in a new city.

It is no longer news that Alphabet has a self-driving car unit that wants to take the job of driving from humans and hand it over to computers. Google self-driving car unit has made impressive success with its robocars as those cute cars makes the rounds on the streets of Mountain View, CA. and Austin, TX. Google says its self-driving cars have logged more than 10 million miles of autonomous driving and that they’ve been involved in less than 20 accidents.

Now, Google wants to gather more real-life driving data for the AI that drives its cars and the firm is starting to test drive its autonomous-driving cars in Kirkland, WA. The firm says Kirkland is the “ideal” place to test self-driving cars for a number of reasons.  To start with, Kirkland has a temperate climate that provides Google with an avenue to test its robocars in wet, rainy conditions. More so, Kirkland has a hilly terrain that provides the firm with an opportunity to test its cars at different angles and elevations.

Kirkland is the third city in the U.S. where Google’s self-driving cars are being tested. Kirkland Mayor Amy Walen says, “Kirkland is a town that prides itself on being open to new technologies that could help improve our daily lives… We are excited about the potential self-driving cars have to reduce accident rates and to provide mobility for people who can’t get around easily.”

Alphabet won a battle, but it has to win the war

Apple Inc. has a never-say-die spirit and the firm has shown that it won’t lose the ongoing war to Alphabet without a good fight. On Wednesday, Apple overturned a market decision without using a single lawyer or even going to the courts. 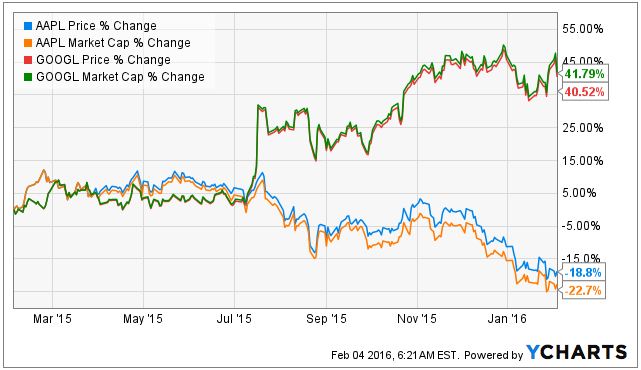 Both firms operate in the tech space where the market moves on hype, rumors, and news. However, Alphabet seems to have market momentum to its advantage (as shown in the chart above) because the shares of Alphabet has gained 40.52% in the last one year while the shares of Apple have lost 18.8% in the same period. More so, Alphabet’s market cap has increased by 41.79% while Apple’s market cap has dropped by 22.7% in the last one year.

Yesterday, the shares of Alphabet   closed down 5% at $726.95 while the shares of Apple gained 2% to close at $96.35. As at market close on Wednesday, Alphabet had a market cap of $515.1B while Apple had a market cap of $534.2B. The war to clinch the title of the “world’s biggest brand” will include tons of back and forth between Alphabet and Apple in the coming months and investors had better fasten their seatbelts for a roller coaster ride.