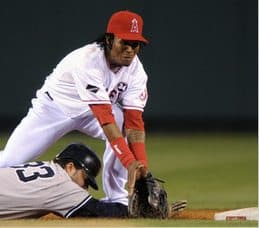 I disagree with some of the points from Allan Roth’s recent post ‘The Dangers of Bond Funds”, on the WSJ’s personal finance blog.   Here’s why:

The basic point of the article is that a lot of money has been flowing into actively managed bond funds.  He feels that investors are making a mistake with actively managed funds and should be putting their money into bond index funds instead. (For an overview of active vs. passive bond funds go here)

To convey his point, Roth shows the performance of 1 actively managed bond fund, which lost 36.2% in 2008 due to the financial crisis.  He then compares that to the Barclays Aggregate Bond Index, which is tracked by the Vanguard Total Bond Index Fund, and gained 5.2% during that same time.

Here’s what that looks like in graphical format. The orange line on the chart is the Vanguard Total Bond Index Fund (VBTLX), and the Blue line is the Oppenheimer Core Bond Fund (OPBCX), the active fund that Roth mentions in his article.

To help further drive home his point Roth brings up star bond fund manager Bill Gross’s underperformance in 2011 as an example of how even a “skillful manager can stumble”.

Unfortunately for Roth’s argument however, this comparison is not as convincing.  This time the blue line represents the actively managed PIMCO Total Return fund, which has been absolutely crushing the passively managed Vanguard Bond Fund for years.

And for those investors who put their money into the PIMCO Total Return fund on January 1st 2011, the start of the worst year in the fund’s history?  Yep, they are up more than the passively managed fund over that time period as well:

Am I saying that investors should opt for an actively managed fund over a passive fund?  No.

Here is what I am saying:

1. According to Morningstar, the average intermediate term bond fund was down around 4% in 2008.  Not as good as the Index, but also nowhere near as bad as the Oppenheimer fund.  While Allan is correct that the majority of active bond managers do not beat their index fund counterparts, I think choosing one of the worst performers in the industry to prove his point was the wrong way to go about it.

2. The question of active vs passive management is not a question of which is safer or more dangerous.  Interest rate risk and credit risk are the two main risks of bond funds, and they are present regardless of whether a fund is actively or passively managed.  This means that if you want to understand the dangers of a bond fund you are investing in, you need to understand how much interest rate and credit risk that fund is taking.  You can learn more about this here and here.

3. If your primary goal from a bond fund is portfolio diversification, then you are going to have a hard time doing better than the Vangaurd fund mentioned in Roth’s article.  We give our highest rating to that fund here at Learn Bonds as well.  However, if you have other goals, like income for example, then I think it would be hard to argue against including some of the best actively managed funds on your list of candidates as well.

To see some examples of how we feel about both active and passively managed funds here at Learn Bonds go here.