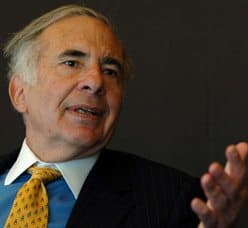 Activist investors have a love hate relationship with shareholders, some claim their unconventional methods are returning much needed value to shareholders, while others say they represent everything that is bad about Wall St.

Namely, that their only concern is lining their own pockets, while leaving companies encumbered with huge amounts of debt. Which is all well and good when rates are low, but what happens when rates rise?

So how do bondholders feel about Carl Icahn and the like? Chances are most of them are nonplussed. But you should be. Moody’s Investors Service has warned that activist investors are increasing the risk of owning corporate bonds.

“Activism is rarely good news for creditors,” Moodys Investors Service said in a report Monday. The ratings firm believes the push to return cash can erode the cushion for debt, increasing the likelihood of default. Last year, 56 companies Moody’s rates were targeted, and the firm expects more this year.

And the problem isn’t going to go away, as institutional shareholders and regulators have become more positive towards the influence of activists, Moody’s contends. Meanwhile, bond markets continue to be strong, giving companies access to cheap debt to fund cash returns to shareholders.

So it looks like bondholders are going to have to live with it. Or you could do what Gary Cloud co-chief investment officer of FCI Advisors does, and avoid taking significant positions in companies that could be an enticing target for activist investors. Specifically those in the industrial and service sectors that have strong cash flow, competitive industry positions and the capacity to increase their debt loads.

NASDAQ: – When pension pain signals bigger ills: Three symptoms to look for. – While we do not believe pension problems threaten to harm state and local finances to the point of breaking the municipal bond market, they are a source of financial pain in some locales. And in rare cases, overly burdensome pension liabilities, when combined with a generally weak credit profile, may be reason to avoid investing in the municipal debt of certain issuers.

Bloomberg: – Investors see turning point on Puerto Rico billions. – Puerto Rico debt is off to its best annual start since 1999 as its $3 billion general-obligation deal addresses the island’s funding needs and eases credit concern across the municipal landscape.

WSJ: – Muni bond costs hit investors in wallet. – Investors who put cash into municipal bonds—a widely popular strategy for those seeking safe, tax-free bets—are paying about twice as much in trading commissions as they would for corporate bonds, according to a study for The Wall Street Journal.

WSJ: – Muni bond costs hit investors in wallet. – Investors who put cash into municipal bonds—a widely popular strategy for those seeking safe, tax-free bets—are paying about twice as much in trading commissions as they would for corporate bonds, according to a study for The Wall Street Journal.

LearnBonds: – Two required stocks – Yes! stocks – For all income investors. – Bonds often form the bulk of the portfolios of income investors, particularly retirees who see safety in holding until their bonds mature. But yields as low as they are, there are better income-generators out there in stocks. And, as any financial planner worth his salt will tell you, even the most conservative investors need to own some stocks for growth to offset the inescapable loss of buying power from inflation. So consider these two stocks for any and all income investors.

WSJ: – Petrobras raises $8.5 billion from bond sale. – Petróleo Brasileiro SA raised $8.5 billion from the sale of overseas bonds on Monday as the oil company continues to borrow cash for its massive investment plan, but it is paying an increasingly onerous price, according to people familiar with the transaction.

IFR Asia: – Riskier refinancings surface in slower U.S. high-yield market. – The US high-yield bond market took a breather Monday with only two new announcements to contend with, but those were on the riskier side and comprised of a previously postponed deal for Global Ship Lease and another for highly leveraged logistics firm Ceva.

Acting Man: – An important investing lesson from the “junk bond king”. – Michael Milken was writing in the Wall Street Journal this week. The “Junk Bond King” passed on an important lesson for investors: Beware a market heavily distorted by government intervention. Things may not be as they first seem.

Income Investing: – Junk bond returns can plunge before default rate rises – Fridson. – Faced with historically low yields and high prices for junk bonds, investors continue to point to a low default rate – just 1.6% in February – as justification to keep deeming them fairly safe investments. (That, plus everything the Federal Reserve has done over the past five years.) The thinking is that until default rates start rising, junk bonds remain insulated from losses. Nut that thinking is wrong, according to Martin Fridson of FridsonVision financial research service.

Trading Floor: – Bond Update: Emerging markets steady despite Ukraine fears. – Markets are focused once again on the continual headline risk from Ukraine, and Emerging Market Bonds remains on subdued levels. One riskier asset class, with apparently less crisis correlation for the moment, is European High Yield Bonds. It seems that the cashflows into European markets are continuing to weigh on European bond classes, as Europe has worked as a bond fund safe haven for a while.

WSJ: – Investors can’t get enough of Colombia. – Investors have been stampeding out of emerging-market bonds, but they’re falling in love with Colombia.

Financial Post: – Gary Shilling: How to prepare your portfolio for the next market shock. – U.S. stocks may be headed for a blow-off as individual investors pile into the market after last year’s meteoric increase. Peaks often are reached when everyone has been sucked in. Then, a major shock could force investors to focus on the slow global economy. With U.S. growth of only about 2%, it won’t take much of a jolt to precipitate another recession, which is long overdue by historical standards.

About.com: – Two factors to consider before selling your bond funds. – In the past few years, investors have heard a steady stream of negative commentary as it relates to the bond market. With economic growth on the upswing and the U.S. Federal Reserve tapering its quantitative easing policy, the thinking goes, bond yields have nowhere to go but up. (Keep in mind, prices and yields move in opposite directions). However, bond investors need to ask themselves an important question: what are the alternatives?

ETF Trends: – ETF Chart of the day: Junk bond choices. – High yield corporate bond ETFs have backed off of their recent trading highs, and in the cases of the two largest funds in the space, HYG (iShares iBoxx $ High Yield Corporate Bond, Expense Ratio 0.50%) and JNK (SPDR Barclays Capital High Yield Bond, Expense Ratio 0.40%), look to be setting up for a fourth straight session as there has been some clear selling pressure across the fixed income markets in general in the past week or so (pushing rates higher).

Morningstar: – Blurred lines for funds a mixed blessing for investors. – Placing mutual funds into distinct asset classes and categories has obvious benefits. Without dividing funds into groups, performance rankings would be of limited use, as bond funds would be compared with stock funds, and small-cap funds with those that focus on multinationals. A top-quartile ranking might mean a fund had enjoyed investment success, or just that its slice of the market had been in favor.

“You could hire 2,000 schoolteachers for that money” – PIMCO trustee on Bill Gross’ $200mil salary…calls his performance “mediocre”

PUERTO RICO SAID TO INCREASE BOND DEAL TO $3.5 BILLION (with yields in the middle of yesterday’s range — 8.727%)

The current UST 5-Year yields 1.625. The year end break even for this security is 1.94 approximately 31.5bps higher