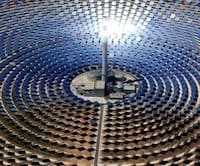 Last week, securities plunged following Abengoa stating it considered its $630 million of high-yield green bonds as being non-recourse debt, something that does not usually allow creditors to seek claims coming directly from the company should there be an incident of default. Although investors knew the notes were recourse debt, the change raised questions pertaining to the company’s leverage ratio.

According to a regulatory filing, Abengoa’s consolidated financial statements reflect all outstanding debt. The company also made it clear that it guarantees the green bonds and that the same security can be used as recourse debt although it has a classification as non-recourse.

Manuel Sanchez Ortega, Chief Executive Officer with Abengoa reassured both investors and analysts that they have been heard. As such, the company will provide consistent financial information to ensure there are no misrepresentations.

Ortega also said that some bonds at current prices will be bought back and that $483 million has been set aside to repay debt. Currently, the company has $241 million of bonds that will mature in February and another $401 million coming due in March 2016.

Meetings have been organized between Abengoa, Citigroup, Inc., and HSBC Holdings PLC, as well as New York and London investors for this week during which the company’s accounts will be discussed, this according to Barbara Zubiria, the vice president for capital markets with Abengoa.

As stated by Benjamin Sabahi, head of Paris-based corporate credit research at Exane Derivatives, some of the pressure has been released with the announcement of the bond buyback, sending investors a positive message regarding their relationship with banks.

The first green bonds were sold by Abengoa through Abengoa Greenfield SA on September 24 to fund various projects that meet specific social, environmental, and governance criteria until long-term funding can be obtained.

The bonds are accounted for as part of $1.28 billion of non-recourse in progress debt. As of December last year, Abengoa had $6.40 billion of total net debt. Pierre Beniguel, fixed-income analyst with Twentyfour Asset Management believes that Abengoa is being punished for its poor investor communication.

Twentyfour Asset Management is responsible for overseeing $5.6 billion of assets, which includes Abengoa’s euro-denominated bonds. Beniguel added that there is definite value in Abengoa but that bonds seeing recovering above par anytime in the near future is not something expected.

Abengoa’s Class B shares climbed 23% to $1.48, this after experiencing its largest one-day drop on record of 62% on November 14. Jason Channell, equity analyst at Citigroup said the share price reacted to comments from management regarding debt classification. The issue of recourse and non-resource classification is that a previously undisclosed amount of debt had been discovered, but not revealed.