On May 14th, when the US Supreme Court announced the legalization of inter-state sports betting sports, Catena Media’s share price hit a record level of 148.5 SEK.

Such was clamour around the news that 4 days later Catena Media’s then interim CEO Henrik Persson Ekdahl published a report on how Catena Media was perfectly primed to take advantage of this news. And equally, how its shareholders would benefit for years to come.

Fast-forward 15 months however and we see a very different picture. Catena Media’s share price has plummeted 67% down to 48.50 SEK, its lowest price since a public listing. Its entrepreneurial co-founder/investors – chiefly responsible for its early growth, M&A and IPO – have all but left the company. And a string of poorly planned, expensive and bad acquisitions have seen its Q2 profits drop 29% year-on-year despite more than £100 million on recent acquisitions.

In this article, we examine five reasons why Catena Media’s business model and share price has suffered. We also suggest some solutions and key areas of the business where they can turn this around.

When Catena Media co-founders Henrik Persson Ekdahl and Andre Lavold of Optimizer Invest announced the 50% sale of their shares in August 2018, it sent shockwaves around the industry. The two investors had been instrumental in Catena’s early success – taking the company from a 2-man operation to a public listing within 2.5 years – and dictating most of their M&A success.

However, while they aimed to appease existing shareholders at the time with a voluntary 12-month lock-in over any remaining shares, their departure from the board in February 2019 signalled the end of Catena’s twilight period.

The departure of the these iGaming giants from the board should not be overlooked. Both have expert knowledge and contacts inside the iGaming industry. Both have launched and sold leading operators such as NordicBet, BetSafe and Betit from scratch. And both had led Catena’s M&A strategy during their early growth periods. In short, they have both had huge sway in Catena’s early success and subsequent growth.

Other noteworthy departures from the company include Catena’s first Head of SEO, (responsible for building, growing and maintaining the company’s intricate network of 1200 SEO sites and PBNs), as well as Catena’s other co-founder, Erik Bergman, who stepped down as Chief Strategy Officer in December 2017.

While losing a co-founder is not an atypical event for a business that goes public, the fact that Catena’s early growth strategy was so heavily centralised around two figures, condensed into a period of 3 years (65% growth per annum) and based on artificial growth and acquisitions – has made it much harder for incomers to take over and continue that growth trajectory. After all, Catena’s stated financial targets of achieving 100 million Euros EBITA by 2020 (now delayed to 2021) means that they need to triple the profits of the company based on the Q2 earnings 2019 report.

M&A is responsible for 99% of Catena’s revenue growth. In the last 2 years the company has spent well over £200m on acquisitions, acquiring 1200+ sites in the process.

Whether or not this is a viable long-term strategy isn’t up for debate – a business can’t continue to a maintain a healthy revenue growth curve by purchasing 500 sites per year, especially when co-founders are only tied to a 12-month earnout contract.

Each acquisition comes with its own unique product, leadership culture and marketing strategy. The strategy, goals and culture of a casino affiliate website based in Tokyo, Japan will be very different to those of a stocks subscription product based in Sydney – or a PPC sports betting affiliate channel in London. Overseeing so many complex sub-companies is simply unsustainable.

The loss of co-founders – who are typically only attached to a 12-month earnout contract – causes a severe loss of operational expertise. Finding replacements for co-founders that have built complex 7-figure companies in arguably the most competitor landscape on the internet is a monumental challenge. The fact that Catena’s revenue has declined in consecutive quarters in a period with little or no new acquisitions shows that historic acquisitions are struggling to maintain operating processes and market share.

In many cases, the loss of co-founders – who use their earnout money to jump start their own new ventures – adds to Catena’s own direct competition. 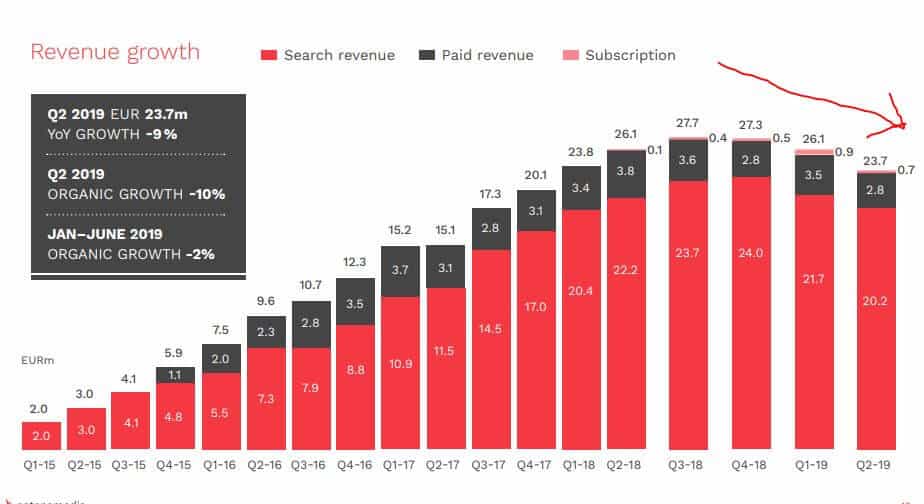 However, the increased demand from shareholders and the need to buy more assets to keep quarterly revenues rising has led to a number of poor M&A decisions.

Examples include SBAT, a social media sports betting community purchased for $10 million who’s Facebook accounts got banned; ASAP Italia, whom Catena acquired for $20m a month before regulations banned the advertising of online betting in Italy; BeyondBits, a German binary options affiliate acquired for $10m several months before EU regulation banned the product, and CasinoUK.com, a website using risky SEO tactics acquired for £10 million which subsequently lost nearly all of its rankings after the transaction.

Of course, not all of Catena’s acquisitions have performed so badly. AskGamblers.com, acquired for 15 million Euros in 2017, has gone from strength to strength. It likely drives a large proportion of Catena’s organic casino traffic and the company has announced plans to expand the site into new languages.

However, the company’s attempts to diversify into the Finance vertical in 2018 has left a lot of questions to answer.

In order to go forwards, the company needs to improve its M&A strategy, due diligence and SWOT analysis of the properties that it acquires – as well as doing a better job of convincing the owners to stay on board longer. This can be in the form of long term equity lock-up options, senior management positions or paid consultancy fees to keep them close.

As an iGaming affiliate with 70%+ of revenue coming from revenue share, Catena is highly susceptible to changing market conditions and regulation. Sometimes this can be beneficial (as we have seen with the legalisation of sports betting in several US states), however in general regulatory changes have gone against the market.

GDPR changes have made it impossible to continue to send free spins newsletters to historic customers.

Regulatory changes, especially in Italy, France and the UK, have made it increasingly harder for Catena to market its services. AskGamblers.com for example, which allows users to play free-play slots on their site, is in fact now breaking UK Gambling Commission rules, which prohibit free play games without  verifying a user’s age. UK regulated casinos must also enforce KYC on customers before depositing.

In the last 1.5 years Catena has been through 3 different CEOs. Its only co-founders with real industry expertise have vacated the board. And the companies that they have purchased are losing their original management team and co-founders.

As such, Catena’s long term strategy has a difficult wall to climb. It must replace the knowledge gap vacated by entrepreneurs who have left the group company. It has to improve its M&A strategy. And it desperately needs to find new verticals – or hope regulatory changes in the US happen sooner rather then later – in order to maintain its growth trajectory and share price.

Its growth strategy and outlook featured in the Q2 Presentation do address some of these issues. They point to fewer acquisitions as well as a focus on improving and building their existing products range and expanding into new Geos. However, both are these strategies are largely unproven.

Catena have never proven that they are capable of building a core set of web products like Better Collective have done, who’s share price is up 40% this year. Nor have they proven that countries such as India and Romania will show successful returns.

Even their Q2 report states that the Latin American market launch is merely a test for further expansion. Therefore, a great deal of hope is placed on favourable US market conditions and the ability to learn to improve their own products at a faster pace then competition.

Catena’s public financial target of reaching 100 million EURO EBITDA by 2021 means that not only stop the 22% YOY decline (April – June 2019 vs April June 2018) but they now must triple current earnings within a period of just 1.5 years. All of this is unlikely at best.

Catena Media is a story of how smart businessmen with 8-figure pockets can consolidate an industry of 1200+ websites and deliver it as a product. The next story in Catena’s journey will be whether it can maintain, improve and grow all of its websites under a united strategy and culture.

While Catena Media may have a moderately appetizing Price/Earnings ratio of 7.9 by market standards (down from 17.04 in Dec 2018), the fact that it only has 34m Euros in current assets alongside the underlying strategic issues mentioned above generate some concerns.

With 340 million Euros in intangible assets on Catena’s balance sheet (up from 239 million in 2017, presumably all of which are acquisitions), the company is purchasing assets based on a 3-5 year multiplier (as per Catena Media’s own press releases), then delivering annual profits of an 11 year multiplier (taken from their financial reports and balance sheet), while the market maintains a price earnings ratio of an 8 year multiplier. And all of this is despite the fact that the majority of their acquisitions are performing worse after being acquired. From a pessimistic point of view, Catena’s P/E ratio shouldn’t be much more then 5.0 given this is the valuation of the assets at purchase price and the company doesn’t have any proof of maintaining or growing most of them.

However, given that they still have 250m+ Euros in readily available credit facilities and 30m+ Euros in annual profits, they still have plenty of ammunition to consolidate new markets and improve their M&A strategy. If they can learn to maintain, improve and grow their existing websites, while making better acquisitions and keeping co-founders on longer terms, the company has a chance to turn things around. That’s despite setting a lofty growth target of tripling quarterly earnings by 2021.

Adam Grunwerg is a partner at Finixio and PSY Ventures. HIs fields of expertise including digital marketing and M&A in the finance and igaming industry. During 2016-2017, he had worked in Catena's UK marketing and operations team before leaving to start his own ventures.