Warren Buffett’s (pictured) conglomerate Berkshire Hathaway has banked around $40bn from its investment in Apple, which along with other tech stocks rallied during the pandemic.

The man often called the world’s most famous investor progressively built up its position in the iPhone maker until owning 245 million shares, making Berkshire the second-largest shareholder of Apple, only behind money manager Vanguard.

Based on Apple’s current market price, Berkshire’s stake is now worth around $95bn, which would result in a $40bn profit for the Oracle of Omaha after Apple’s rally from its March lows.

Berkshire’s stake in Apple dates back to 2016 when the company decided to purchase 10 million shares in what was seen as a major shift in Buffett’s usual aversion to tech companies.

Buffett, who’s famous for investing in more traditional businesses like insurance and railroads, has named Apple as Berkshire’s “third business”, after saying that the company is probably “the best business I know in the world”.

Berkshire Hathaway (BRK.A) shares have been lagging behind the market so far this year, as the company is heavily exposed to virus-sensitive segments of the economy like insurance and transportation.

Berkshire Hathaway shares closed the day with a 0.3% gain on Thursday, trading at $286,271, while the stock currently accumulates a 16% loss since the year started, a poor performance compared to the 0.4% loss recorded by the S&P 500 during the same period.

Meanwhile, Apple (AAPL) shares have rocketed more than 30% since January, outpacing the Nasdaq 100 index by nearly 11%, as investors flocked to tech stocks at the height of the pandemic. 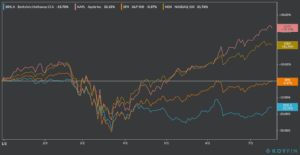 However, a growing number of Wall Street analysts are concerned that tech stock valuations are significantly overstretched and they could be due for a correction in the short-term, especially with the risk of a second wave of the virus looming in the backdrop.

“The challenge for Buffett is — are we in a financial euphoria episode and is Apple going to get sucked down?” Bill Smead, chief investment officer at Smead Capital Management told CNBC.

That said, Buffett – well-known for being a buy-and-hold investor – is unlikely to cash out of his Apple investment any time soon, especially since the billionaire investor’s conglomerate is sitting in more than $100bn in cash already.