Tesla Motors Inc will release its Model 3 as promised and on time. We can expect to see the car come of the production line in the 4th quarter of 2017. This is one of the many EVs due to come in the next 18 months, and will help push plug-in EVs (PEVs) into the mainstream.

In a new guide book; Getting Ready For Model 3: A Guide for Future Tesla Model 3 Owners by Roger Pressman; various details about the car’s performance as well as considerations for keeping it charged are covered, says a report from Forbes by John Gartner. If you or someone you know is planning to own a Model 3, this book will make a great Christmas gift!

Those who are looking to get a preview on what to expect from their soon coming Model 3 will find the chapter on performance and autonomous vehicles especially exciting.  The book gives an overview of how EV and assisted driving technologies work in general, as well as Tesla’s likely implementation.

Pressman clarifies several important issues that are often overlooked and misunderstood. Most buyers do not yet understand how efficient electronic motors are in providing more torque at low to medium RPMs than conventional vehicles. Tesla has done quite an impressive job in offering speedy and nimble driving, and bringing that capability to the Model 3 explains the long reservation list, notes Gartner.

A must for first time PEV buyers 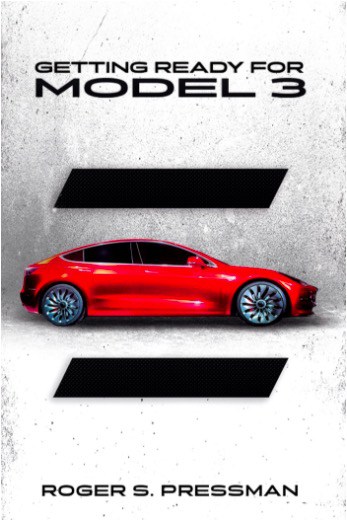 Tesla Motors Inc has been in the news across the globe for offering innovative autonomous driving in its vehicles. To clear the confusion if any, Pressman has explained different levels of autonomy and underlying technologies. All hardware and software necessary for Tesla’s self-driving technology will be included in the Model 3, but buyers will have to pay to unlock the self-driving feature in their cars.

A recent survey concluded that the majority of owners understand the limits to which Tesla’s self drive technology can work, but a few who overestimated the capacity of Tesla have been victim to some serious consequences. “With the Model 3 likely to outsell all previous Tesla cars combined, barring an expanded education push, the number of misinformed drivers putting too much faith in Autopilot could skyrocket,” says Gartner.

Gartner recommends the book a must for first time PEV buyers as it will help them in knowing “, how to keep the 215-mile-range, all-electric car sufficiently charged.” The guide will be very helpful, especially considering that Tesla’s Supercharger network won’t be free from next year.

Tesla Motors Inc will supposedly introduce a new type of glass in the Model 3 as the company is going big on its R&D efforts to leverage the synergies with recently acquired SolarCity. A lot of buzz has been created around the Model 3 and other affordable PEVs due to come in next 18 months. The real test, as per Gartner, would be how much enthusiasm Tesla is able to convert into sales.