When Tesla Motors Inc introduced 100% electric cars back in 2008, some were skeptical.  An all electric car might be great for local trips but what if you put on a lot of miles for work or if you want to take a road trip?

Even those brave enough join the Tesla tribe faced “range anxiety” when they were on the road. (“Uh oh… I’m not sure I have enough charge to make it home or to the next Supercharger” – that’s Range Anxiety). Tesla Superchargers have become much more common today and updated nav systems tells drivers how far they can go on their current charge and where they need to stop to charge. Range anxiety isn’t nearly the issue it once was.

Tesla’s battery packs are big – really big. The Model S battery weighs nearly 1200 lbs.  Rather than using large single unit batteries and to save on cost and weight, Tesla uses thousands of small lithium-ion batteries placed side by side in a sealed compartment.  The individual batteries look almost identical to the kind we all use in common electronic devices.

The Tesla Gigafactory outside of Reno, Nevada, is tasked with manufacturing and reducing the cost the batteries that will be necessary to power the entire line of Tesla EVs.  That includes the upcoming Model 3 which is scheduled for deliveries early next year. Nearly 400,000 Model 3s have been reserved so far.

A Tesla battery is typically good for anywhere from 230 to 270 miles and until now, the only way to replenish miles was to plug in.

Let’s take a look at a few cool charging options for Tesla EVs. 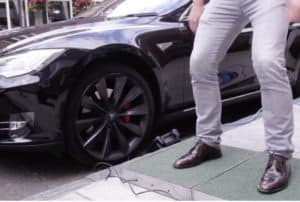 Pavegen is developing technology that converts energy created by footsteps into electricity to power services in areas where there is a lot of pedestrian traffic. Founded in 2009, the Pavegen has been involved in over 100 projects in more than 25 countries. With revenues of over 2.5 million, a global distribution network  and internationally granted patents, the next step is scale.

Tesla Motors and Pavegen joined forces last year to show off a pretty impressive trick where a Tesla Model S was actually powered by the footsteps of pedestrians. Pavegen tiles were placed on a street and a charger was connected to a Tesla. The first time a pedestrian stepped on the tile, the car actually moved forward.  The level of battery charge continued to increase each time the tile was stepped on until the car eventually drove off.

Pavegen isn’t available for EV charging yet but with this kind of creative thinking and technology, you can bet it will be.

Look ma!  No cable!  Charge your Tesla at home – wirelessly

Tesla owners typically charge at home. Most have 220v outlets in their garages and they plug their cars in the evenings, waking up to a fully charged battery. Many Tesla owners have reported getting into to their car in the morning only to discover that the car is not charged because they forgot to plug in the charger the previous night. It’s more common than you might imagine. Many drivers unwittingly forget to plug in the chargers to their cars after a long hard day.

Wireless charging is a technology that Alphabet/Google is starting to test on its self-driving cars at least based on reports from IEEE Spectrum. However, while Google is still testing the technology, Tesla owners are way ahead of the curve and they can already place orders to buy and use wireless charging.

A cool startup, Plugless, wants to relieve Tesla owners of the pressure of remembering to plug in. The firm is taking the game one step further by developing a technology for wireless charging. Model S owners can now place orders for a new product that allows them to charge their cars without plugging into a home charging system or a Supercharger. The new wireless charging system is called Plugless Power and it’s designed for the Tesla Model S to provide a smart charging system that requires zero input from the driver. 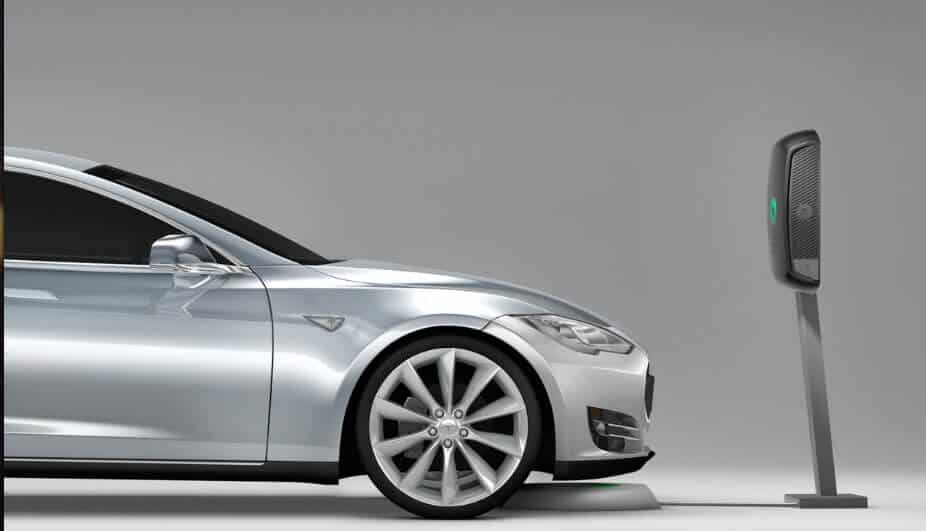 Plugless Power is an efficient hands-free wireless charging technology that is fully autonomous for charging the Tesla Model S – it is not yet available for Model X, Model 3, or Roadster. Plugless Power is a 7.2kW charger that offers the same power output as a corded charger – the system delivers 20 miles for every hour of charging giving your Model S an overnight charge good for 200 miles or more.

The best part is that Plugless works with the Tesla charge timer and its simplicity and usability ensures that it doesn’t alter the plug-in experience you’ve had with your Model S – except for removing the need to plug in a charger. Plugless would normally be hardwired into a home’s electrical system but it can also be manually plugged into a dedicated 50Amp circuit near a parking space.

Model S owners can enjoy a reservation-holder-only pricing of $2,440 by paying a fully refundable $244 deposit. Deposits end May 31 and Plugless Power will sell for about $3,290 when shipments begin.  The firm also offers a 45-day return policy for any reason after installation and Evatran will gladly bear the cost of shipping both ways.

Range Anxiety is gone but charging is still a serious issue

Charging is an issue that Tesla Motors owners contend with on a daily basis. Tesla Superchargers are fast, at least when compared to home charging, but you’re still going to spend more time stopped at a Supercharger than you would at a gas station. A growing problem is that you might have to wait for a spot at a Supercharger. This is happening at some busy California Superchargers already but when you add 400,000 Model 3s to the mix, the problem could become serious.

Tesla has planned the Superchargers to be used only for long distance trips but CEO, Elon Musk admits that “there are a few people who are quite aggressively using it for local supercharging… We’ll sort of send them just a reminder note that it’s cool to do this occasionally, but it’s meant to be a long-distance thing.”

Tesla has 624 Supercharger stations with 3,708 Superchargers but the superchargers are not enough to serve the needs of its customers. The firm now has an ambitious plan to deliver 500,000 cars by 2018 and 1M cars by 2020 and the charging issue with Tesla might worsen unless Tesla/owners take proactive steps.

Roger Chou in San Diego, who has ordered a Model X but drives a Model S told WSJ that “Tesla sales will drop if they don’t build more supercharger stations… If they want to start charging people, that is fine, but be clear about it, so people can make their decision before spending $100,000-plus on a car.”

Evantran claims that Plugless has already delivered more than 500,000 charging hours to users across U.S and Canada. The adoption of the device has already been recorded in 6 out of 13 Canadian Provinces and in 43 out of 50 US states. The firm reports a 500% increase in the number of people who use Plugless from mid-2015 to first the first quarter of 2016.

How about recharging while you drive?

The British government is already out to test out the new road technology and the government is committing about $779 million to the project through 2020. Mike Wilson, UK government’s chief highways engineer says, “Vehicle technologies are advancing at an ever increasing pace and we’re committed to supporting the growth of ultra-low emissions vehicles on England’s motorways.”  Interestingly, a similar technology is already being used in Gumi, South Korea where shuttle busses are charged by underground charging systems.

In another development, researchers at Clemson University are working on a dynamic wireless charging system on roadways at the university’s International Center for Automotive Research (ICAR) in Greenville, S.C. Before now, the researchers have developed a stationary wireless charging technology similar to the system being offered by Plugless. Interestingly, the R&D for the new mobile wireless charging system is backed in part by a multimillion-dollar grant from the U.S. Department of Energy (DOE). In addition,  a consortium of Oak Ridge National Laboratory (ORNL), Toyota, Cisco and some other firms are also backing the project.