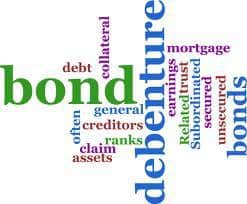 Debentures are a type of debt instrument that are not secured by specific property or collateral, but are backed by the full faith and credit of the issuer. If the issuer were to liquidate, the debenture holder is considered a general creditor, and has a claim on any assets not specifically pledged to secure other debt. Debentures are frequently issued by large corporations and governments to raise capital. Companies that are exceptionally creditworthy and have never defaulted on any of their other debt, do not feel the need to pledge their assets to attract investors. Debentures issued by governments are considered risk-free. Treasury bonds and Treasury bills are generally considered risk free because governments, at worst, can raise taxes or simply print more money in order to redeem the debentures at maturity.

Based on convertibility, there are two types of debentures:

Debentures allow companies to raise money from the public without diluting ownership. Also, they are usually repayable at a date, far-off in the future. Debentures help to reduce the burden of corporate income tax, since interest is charged against the profit and loss account. During period of inflation, the issue of debentures may be advantageous because the obligations of paying interest and principal decrease in real terms as the price level increases. For an investor, their main advantages are that they are often easy to sell in stock exchanges and are less risky than equities.