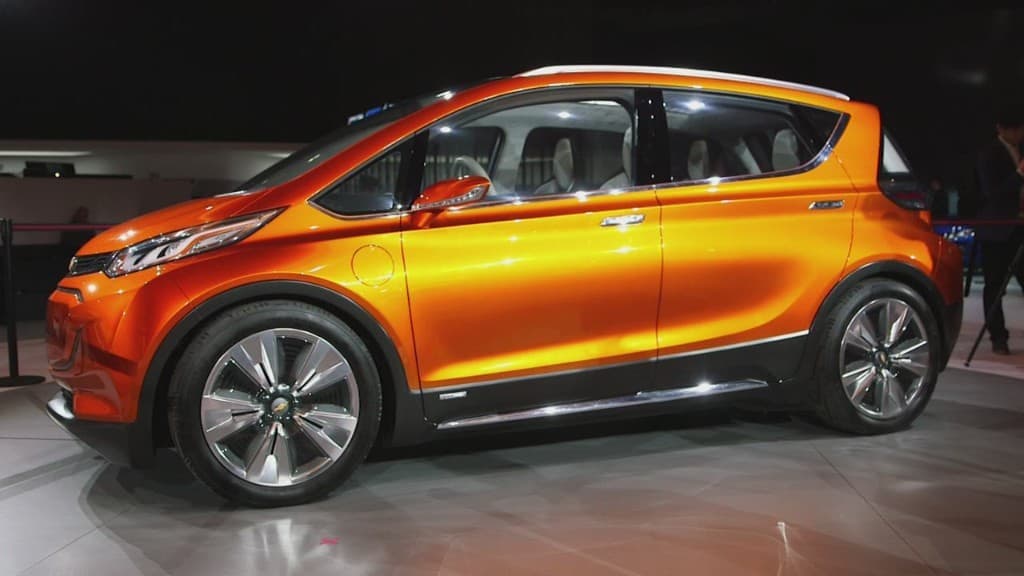 As Tesla Motors Inc prepares to build the Model 3 and Chevy Bolt also on its way, the second-gen of electric cars are expected to set new benchmarks on range, price and features. The Chevy Bolt with a promise of over 200 miles range and sticker price of around $37,500 is seen a potential rival to the Model 3. Though the Model 3 priced at $35000 has more than 325,000 reservation deposits at $1,000 each paid by eager intenders, Chevy Bolt has some advantages over it. A report from Hybrid Cars discusses this.

Before going through the advantages, lets clear some disadvantages as well. Bolt is a good looking car, some might go as far as calling it a perfectly fine looking car, but the Model 3 is way better in design and looks, says a report from Hybrid Cars. Frankly, the Bolt is like the electric Chevy Sonic, with some extra frills added while the Model 3 is along the lines of an electric BMW 3-Series. Another issue with the Bolt is, it has no nationwide network of Superchargers to offer.

GM accelerated the Bolt’s development from concept to production ready with 55 test mules and 1,000 engineers. Already, at GM’s Orion facility, the Bolt has been pre-produced, and later this year, it will be given approval for sales and production. Assuming that Tesla Motors Inc breaks its habit of missing production deadlines, and keeps its Q4 2017 projection, Bolt will still be on the road a year ahead of the Model 3.

GM has established itself with more than 100,000 plug-in electrified vehicles sold over the past five years, and all this with an exceptional record as well. The automaker has said, lessons learned are being applied to the Bolt.

The best thing GM brought is the LG Chem cells in the in-floor battery and the proprietary 200-horsepower motor attached to the in-house-developed drive unit with 97% efficiency, says the report.

Bolt is a roomy five passenger car with a flat floor and tall ceiling, and its interior is said to be two size grades up from outside. Although the Bolt is not a car along the line with fashion, it is still overflowing with technology. The Bolt has a 10.2-inch touch screen with the latest Chevy MyLink, a surround view monitor system, and more.

The rear-wheel-drive Model 3 “will have great traction on ice due to fast torque response of Tesla drivetrain,” Musk tweeted, but he didn’t state whether the assumption is made with winter tires installed (which always help). Also, the rear-wheel-drive Model 3 won’t perform as well in those conditions as all-wheel-drive versions, which will be more expensive. The Chevy Bolt, however, has a front-wheel drive, and could be preferable in case of slippery conditions, the report says.

GM has said that with a low center of gravity, it will build the Bolt to offer a fun-to-drive quotient of its own. For 0-30 mph in 2.9 seconds, its torquey single-speed motor drive is good, and 0-60 will be less than 7 seconds (the exact numbers have not been announced). This is still much slower than the Model 3, which will run sub-six seconds or better to 60 mph.

But, GM vows it to be a well-balance package, and may make it better with unique features like one-pedal driving and regen braking paddle.

In the next couple years or so, the three biggest plug-in electrified vehicle (PEV) sellers in the US – GM, Nissan, and Tesla – will approach a 200,000 unit cap per manufacturer, unless the U.S. Congress grants an extension. And after this, the $7,500 potential benefit starts to fade.

“We’ve seen no headlines of GM’s “Tesla killer” as were written prior to the Model 3 reveal, and odds are slim anyone would call it one at this stage, as the Model 3 offers much. Be this as it may, the Bolt has noteworthy advantages, and is on track to take its place in history,” says Hybrid Cars.