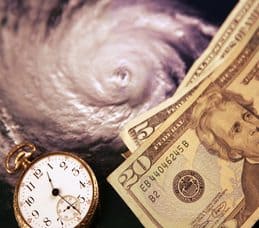 Catastrophe bonds are high yield, risk-related securities, which are used to raise money in the event of a major catastrophe such as the recent New York floods. They are intended to transfer the risk caused by earthquakes, hurricanes and floods away from the insurance industry towards capital markets.

They were originally introduced in the mid 1990s during the aftermath of hurricane Andrew and the Northridge earthquake. When it became apparent the current system of re-investing insurance premiums would struggle to cope if a number of natural disasters, such as a major earthquake and hurricane occurred at the same time. The resulting financial pressure would force many insurance companies to default, leaving homes and vital infrastructure uninsured.

How Do Catastrophe Bonds Work?

Catastrophe bonds work like this: The bond issuer, in this case a reinsurance company, agrees to pay you, the bond holder, a monthly coupon in return for your bond capital. This capital is then invested in low risk securities. You will receive this coupon, until such time as the catastrophe bond is triggered. If the bond is triggered the coupon is suspended and the returns are diverted by the issuer to settle policyholder claims.

That’s all very well, but there are many different types of natural disaster, and the likelihood of them happening varies dramatically. For instance, it’s much more likely an earthquake will strike southern California than an asteroid hit Manhattan. So how do you know what risk you’re undertaking?

So imagine you’re watching CNN and you hear a tornado has struck Nebraska, destroying property and crops. Your second thought, after after thinking about the people involved, will be. Has my catastrophe bond been triggered?

The answer to this will depend on your particular bonds trigger type.

Lets take a closer look at each of these in detail.

This type of bond is triggered when the loss to the insurance industry as a whole, passes a predetermined threshold. Lets say the threshold is set at $20 billion for an earthquake in California. Once the overall losses from the event breach that amount, the bond will be triggered. The bond will specify who determines the industry loss; typically it’s a recognized agency and not the issuer of the bond.

Are Catastrophe Bonds Right For You?

Catastrophe bonds carry a large amount of risk, they’re usually rated BB and lower by the ratings agencies, which puts them in the same category as Junk Bonds. The potential rewards are there to see however, catastrophe bonds have been yielding an average of 9.4% above treasuries, whilst junk bonds can only offer 5.4%.

The risks involved are distinctly different from junk bonds however.

Catastrophe bonds are not affected by market trends, like regular bonds and junk bonds are. The only thing that affects catastrophe bonds are, well catastrophes. There are as yet no technical charts showing the likelihood of an earthquake hitting downtown San Francisco; or a Tornado touching down in Tennessee, so you’re in the lap of the gods with this one.

But if you invest through a fund, which gives you access to a wide range of Cat bonds you should be well covered against potential losses. The catastrophe bond market is actually very resilient, it will take more than a single hurricane to destroy your returns. So if you’re looking for strong yields and the junk bond market looks a little too hot, catastrophe bonds make a sound alternative.