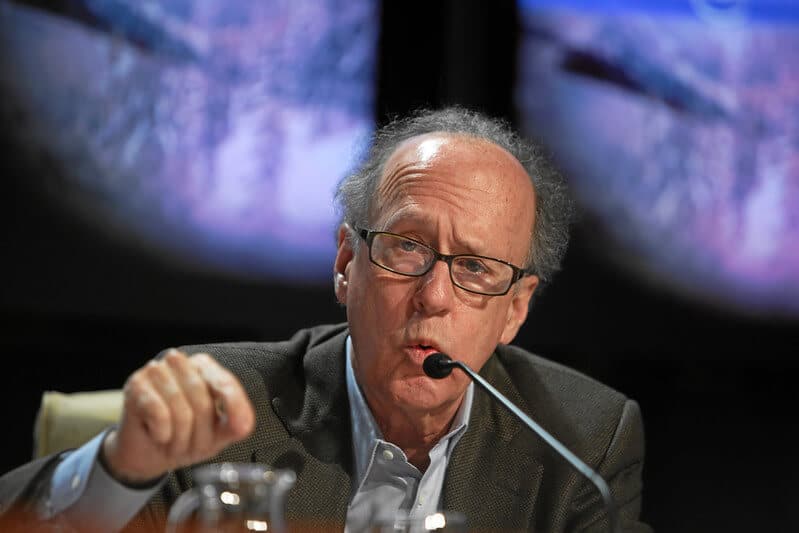 The US economy is headed for a double-dip recession, which means that the pandemic recovery would be W-shaped and not V-shaped as stock markets seem to believe, warned leading economist Stephen Roach (pictured).

“The odds of a relapse, not just the virus but in the economy itself — the so-called dreaded double-dip, is very real,” said Roach speaking with CNBC’s Trading Nation on Wednesday. Roach is not the only economist who’s worried about a double-dip recession. On Monday, Nariman Behravesh, chief economist at IHS Markit said that he sees around a 20% chance of a double-dip recession.

The July Bank of America Global Fund Manager Survey showed that 30% of the surveyed fund managers see a W-shaped recovery, up from 21% in June. Only 14% of the fund managers expect a V-shaped recovery, down further from 18% who expected so in June. In May, Nouriel Roubini, also known as “Dr. Doom” warned of an “unprecedented” recession.

Roach, a former Morgan Stanley Asia chairman, correctly predicted in January that the coronavirus would be far bigger than Sars that occurred in 2003 and warned of a global economic shock. In June, he also warned that the US dollar would plunge 35% against other major currencies by the end of 2021.

Roach is particularly concerned about the demand in the economy and points to China to substantiate his point. “Both economies were able to bring production back quickly, but they’re struggling to bring consumer demand back especially for face to face services where individuals are fearful of getting re-infected,” said Roach.

He added: “This behavioral capitulation on the demand side of the US economy is going to continue to create a lot of problems for businesses, business hirings, [and] potential corporate bankruptcies in the second half of this year.”

Roach also cautioned on the soaring US fiscal deficit, which this year is expected to be the highest since the Second World War. He added: “Our savings and current account dynamic is starting to look terrible.”

While several economists have been warning of a double-dip recession and a market crash, investors seem unperturbed by such warnings. The S&P 500 has now recouped its 2020 losses and is up 1.4% for the year. The Nasdaq 100 Index has soared to new highs led by strong gains in tech stocks and is now up almost 25% for the year.