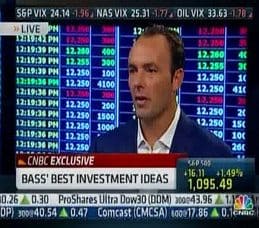 DealBook: Once Shorting Subprime, Bass Now Bullish on Mortgage Bonds – Mr. Bass now thinks some of the worst bonds, those which are not backed by the government mortgage giants Fannie Mae and Freddie Mac, could yield 14 percent in the coming years.

Big Picture: Treasury Gets Thumbs Up on Toughest Sale of the Week – The toughest sale of the week for the US Treasury, debt going out 30 yrs without inflation protection with a yield barely above 3%, not too much higher than stated inflation, went well.

S&P: A $46 Trillion “Perfect Storm” May Be Brewing In Corporate Credit Markets, Says Report – (h/t @cate_Long) Standard & Poor’s Ratings Services estimates the funding needs of nonfinancial corporations in the eurozone, U.K., U.S., China, and Japan at $43 trillion to $46 trillion over the next five years. This includes $30 trillion of debt that will require refinancing and $13 trillion to $16 trillion of new money needed to spur growth..

Zenith Strategies: Assessing Credit and Duration Exposure – We continue to advise that firms hold current or add selectively in dollar denominated debt that offers a more favorable risk to reward in the current environment. The Mortgage Backed I-Share (MBB) has an approximate yield of 3.41% with a duration of about 1.52. While spreads have come in, this is a favored space for many institutions that are simply unable to move out on the credit spectrum but who need carry.

WSJ: For Muni Bonds Less Assurance  – Moody’s Investors Service warned in late March that it might cut bond-insurer Assured Guaranty Ltd.’s credit rating to the single-A range from the current Aa3, which is three notches below the highest rating of triple-A….A downgrade, likely in the coming weeks, would probably crimp demand from local governments and other municipal issuers for Assured Guaranty’s coverage…

BusinessWeek: Pimco’s Gross Cuts Emerging Debt as IMF Sees Slowdown – …cut his holdings of emerging-market debt to a two-year low, selling assets from an area where the International Monetary Fund says growth will slow…Growth in emerging economies will slow to 5.7 percent in 2012 from 6.2 percent in 2011, the IMF said in April.

BusinessWeek: Top US Treasury Forecaster Says Yields to Drop – FTN Financial Chief Economist Christopher Low, the most accurate forecaster of Treasury note yields last year, said Europe’s financial turmoil and slow growth may push 10-year yields to a record low of 1.5 percent…Low was the only one among 70 analysts in a Bloomberg survey who predicted the yield would fall to 2 percent by the end of last year.

MarketWatch: Still Time to Make Money In Treasuries (h/t @ritholtz)  – Market strategist David Rosenberg and economist Lacy Hunt…both see 30-year Treasury yields diving to 2% as prices surge…Hunt’s support for Treasurys is rooted in his belief that U.S. is in what he calls “debt disequilibrium.” Government borrowing and Federal Reserve monetary policy is quashing, not expanding, economic growth, he said. Instead, Hunt noted, too much of this debt is of poor quality: unproductive or worse, counterproductive.

David Schawel: Relationship Between Gold and Real Yields has Broken Down (Chart)  – Bound back in real yields/rally in gold next?

Receive the Best of the Bond Market Via Email: